The Benefits of Privatisation, NOT? PART TWO


We left our tale, a day or so ago (read again), with Northampton Corporation Transport [NCT] in the hands of First Group, and United Counties taken over by Stagecoach.   First had inherited a network of approx 20 town services, following roughly historic main road routes to the borough boundary with some extensions into new housing, particularly in the developing "Eastern District".
United Counties, however, provided the majority of the "Eastern District" routes and suburban services to Hardingstone & Wootton to the south and to New Duston on the western side of town.   So what has happened to the pride of Northampton; the boring but reliable erstwhile crimson buses?  First now run 7 (yes, only seven!) town services; a group of 4 to the north (the green and purple lines)... 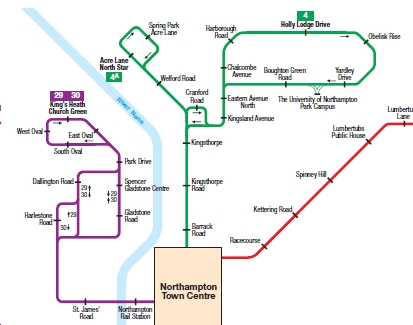 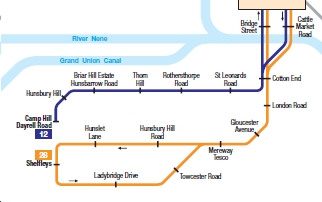 In these two broad areas Stagecoach is absent, more or less completely, although First is "under attack" on the Kings Heath (purple) route from the faster Meridian Bus service 31.

The southern district of the town's expansion is (apart from Shelfleys, orange, above) entirely in the hands of Super-Souter as is the complex of services to New Duston in the west.    So what has happened to the east of the Town Centre, particularly the aforementioned Eastern District.   Herewith First's contribution:- 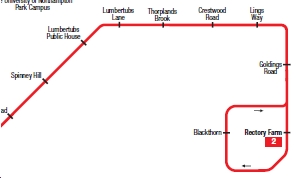 Just one solitary route to the east of the town!    Sadly the superbly named Buttocks Booth suffers from political correctness and false sensibilities and is here called "Lumbertubs Public House".  NCT once ran 8 daily services via the Kettering and Wellingborough Road corridors; now First can only manage just the loneliest one.  The guardians of that crimson crest... 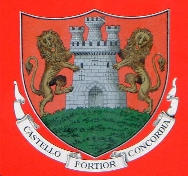 ... might well spin in their grave at what "big business" has done to their former daimler dominated domain.  "Castello Fortior Concordia" is the town's motto which is roughly translated as Concord, or Togetherness, is stronger than a Castle.   Not much togetherness for bus travellers.  Look at the all conquering Stagecoach:- 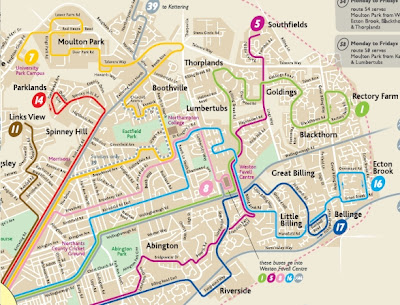 All the coloured lines, with the exception of the 17 (dark blue) are based on NCT's original network.   OK, some (5, 7 and 16) have been extended into former United Counties "territory" but the once proud municipal network has all been swallowed by Stagecoach.
But, we hear you cry, "does it matter WHO runs the buses as long as the service is good?"   The answer, putting sentimentality aside, in the negative - it really doesn't matter.   [Unless you happen to be a First Group shareholder!]

But what DOES matter is how easy it is to obtain information about such a fragmented network. And there are yet more companies providing evening and Sunday services plus a swathe of routes to the University Campus.

Northamptonshire County Council provides an on-line set of timetables for the whole area, urban and rural.

This extract, which appears to show the same route (it's No. 1) with a Sunday service (top) and without a Sunday service (below) suggests all is not well with the list.  As an aside, service 1 runs every 10 minutes Monday to Saturday daytime, so "hourly or better" is a poor descriptive effort.  So not very useful at all unless you know the network - which requires a good map.

Now, once upon a time (and quite a recent time) Northampton County and Northampton Borough produced an excellent and comprehensive timetable book - easy to use and complete with a very good map indeed. 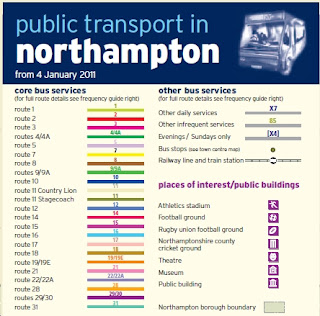 The map (index extract as above) is still available on-line but the web site says nothing about purchasing a hard copy, so presumably you can't. Timetable Books have long-since joined the crew of the Mary Celeste - gorn completely; swallowed up by the Bermuda Triangle of loathsome leafletitis.

So, it would appear once again, that to access this fragmented and geographically illogical group of services, you need the usual determined effort to search out and collect (or download) leaflets by the dozen, ditto a huge PDF map and clutch  these passionately to your bosom before setting out on any bus journey.

How much easier was it to consult a Northampton Corporation Transport pocket timetable book, complete with simple map.   It is what Auntie Anne and little fair-haired pre-fbb did for their exploratory excursions. They seemed to manage very well indeed - and without the benefits (?) of the interweb.

P.S. An oft repeated fbb treat was to go by bus to Dallington Green, walk through to the Kings Heath estate and then indulge in a delectable Sherbert Dip  from the ever-open newsagents; before returning (for the chips, of course!) - what delights disappear with old age?

P.P.S. As Dallington Green was part of a "pretty" former village replete with golden Northamptonshire stone cottages, it was equipped with special luxury varnished wood bus stop signs with corporation crest and gold lettering.  (Just about visible on the photo below) Bet they're not there anymore. 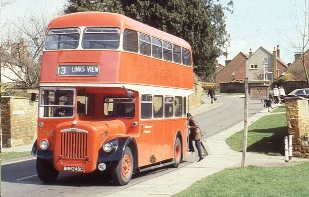 P.P.P.S.  fbb's title for this article may need some explanation.   North Home Town would have been written in Middle English as "Norrþ Ham Tun" - i.e. Northampton.  The "funny letter" is called "thorn" and is pronounced like our modern "th" - amazing what you can learn from a blog.