So it's NOT about Football (thank goodness).
fbb occasionally dons a false moustache and dark glasses; wears a broad brimmed trilby and folds up the collar of his gabardine raincoat to become a mystery shopper, a public transport spy.   In this case he takes a look at bus information at The Hard Interchange, Portsmouth, from an un-informed passenger's point of view. 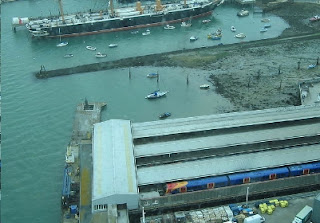 fbb arrives at Portsmouth Harbour Station.   Is there ANY information about buses in the station?  Yes, there are signs ...

... to a bus service that doesn't operate any more!   On platform 3, a similar sign guides prospective passengers to a bus for the ferries to France and the Channel Islands which leaves from Platform 1 (sic). Might be a very long wait.

Now, who operates most of the trains from Portsmouth Harbour? And, who operates a significant number of buses from the nearby interchange?   Here is a clue:-

But there's no bus information of any kind in the Harbour station.   Hmmm!

Is there any sign on railway premises informing those arriving that there a bus station just outside?   Nope!   Not until you get outside the building; where there is a "finger post" that points to the "Bus and Coach Station"; but you might just have noticed it by the time you get to the pole. 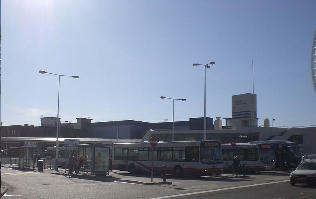 Incidentally, one of the signs on the pole points to, ho hum, "Point" which is 1 mile away; fbb has no idea where or what that is.

Meanwhile, for Gunwharf Quays and the Spinnaker Tower, you are directed away in the wrong direction.   Some wag's been turning the signs around.   Chortle chortle.
Next call is to First Bus' travel centre.  "Do you have a Portsmouth bus timetable?" asks fbb tremulously.   "Sorry, sir, because of all the changes - and more to come - there won't be one until the end of April," replies the man.  Great; it's all changed so we're NOT telling you!

Here is fbb's solution to the problem:- it's called a "photocopier". 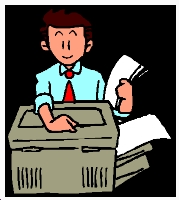 Apparently you can use it to make "copies" of timetables to give out to the general public.  Pretty clever technology, isn't it?   Advice is given free to First's managers, no need to send a fat cheque; a thin one, by way of a donation to fbb's declining years, would be nice!

But, encouragingly (?), there are some booklets for Waterlooville and Portchester. Excellent products complete with timetables and maps but sadly ...

... was withdrawn back in November 2010.
So no first prize and no sur prise for First.

What about the previously hinted-at Stageoach?   Not a dickie bird! The only information available is lists of departure times at the actual stops; no route maps and absolutely no idea how long any particular journey might take. Tough bananas if you set off innocently for Brighton on service 700 in a spare moment.

That spare moment will get you to Brighton in 4 hours 17 minutes!  Or you might take one journey which only runs to Flamsham Park. Where? No idea!

And finally your mystery shopper espied the Visitor* Infromation Centre ...

... with a best Information Service in the South East Award, so a huge banner proclaims.   So this is the leading source of Visitor Information in the area.

And this is right next door to one of the major tourist attractions in the South of England.  Well, they've got a point.  Once you've arrived at "Flagship Portsmouth" and enjoyed HMS Victory, Warrior and the Mary Rose, you obviously won't want to go anywhere else - ever!!   Certainly not by bus.

* Used to be called "Tourist" Information Centres.   Presumably some tourism "high flyer" on a huge salary has decided that the word "tourist" is somewhat degrading and "visitor" is more politically correct.  Apoplexy redoubled!

Next blog : due Monday March 21st
Posted by fatbusbloke at 01:01