The Designer who Developed the Duck

fbb's first blog to include a thrilling video clip!

Developed the Duck?
Not God, who developed a huge variety of the feathered kind... 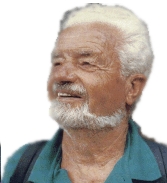 He was born in Leigh on Sea, Essex, (near Saarfend) in 1905 and died in 2001 having taken American citizenship in 1935.   He was an adventurer who dined with cannibals on a world tour; an ornithologist who strived to protect Ospreys and an environmentalist who worked to persuade the US government to ban the disgraced pesticide, DDT. [That's Dichloro-Diphenyl-Trichlorethane - a useful name to drop casually into the conversation at parties.]
His un-sung and serendipitous contribution to modern public transport was the vehicle that he and a small team designed for use during the Second World War.
Some s*xt* years ago, fbb remembers a family holiday on the North Norfolk Coast.   One of the entertainments at Hunstanton ... 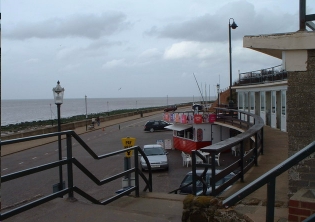 ... (or was it Cromer?) was the chance of a ride in an ex-US army DUKW - universally called a "Duck".  fbb remembers the excitement of this silver painted monster, belching forth black smoke and roaring like a demented leviathan as it plunged powerfully into the briny. fbb's mum, of highly nervous disposition, would not permit "daddy" to take the future fbb for a ride (it might sink!) and bought him an ice cream instead. 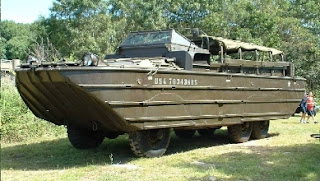 DUKW?  A US Army vehicle code?   Actually, no.  Thanks to the ever-reliable Wikipedia (?), fbb can reveal that the letters were the manufacturer, General  Motors, codes for:-
D - built in 1942
U - utility i.e. amphibious
K - all wheels driven
W - two axles at the rear.

The concept of an amphibious bus ride (for tourists) has had something of  renaissance in recent years here in the UK - the most notable being "Duck Tours" on the Thames. 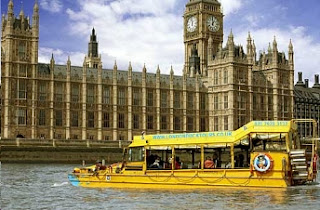 Needless to say, Transport for London provides properly labelled stops for the "service".

But these ex WW2 monsters still ply their somewhat quirky trade in many resorts world-wide.   Meanwhile, back in Hunstanton in 2011, fbb introduces you to "Wiley Wash Monster" - a somewhat more modern version (dating from the Vietnam War) of the 1942 creature. 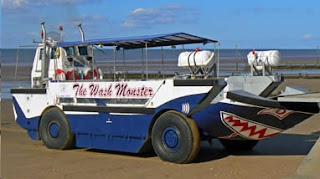 Now, with a face like that, it would certainly have brought on one of fbb's mum's "funny turns".

But one thing IS certain; the vessel is much more exciting than the spectacularly unsuccessful "Amfibus" tried out in Glasgow by Stagecoach. See "the incredible shrinking ferry". (read again)

P.S. Herewith a video clip commissioned from Neil [No. 2 son] of Duck Tours plying its trade on the tranquil waters of the Thames near Victoria;
as the video ends, the DUKW leaves the water for Albert Embankment near Vauxhall Bridge.

P.P.S  It was Neil [No. 2 son] who cynically suggested the sobriquet "fat bus bloke" for your esteemed author.  Thanks a bunch, kid!