The Wear-side Worm of Washington

Lord John Lambton didn't go to Church on that particular Sunday - he went fishing instead.   A mysterious man met him on the riverbank and warned him of the catastrophic consequences of his sinful sojourn by the silvery stream.   He caught no fish, which presumably served him right; all that hung on his hook was a small black slimy worm - which, disappointedly, he threw down a well.
He then went off to the Crusades as a penance for his piscatorial parenthesis.  In his absence the worm grew to an enormous size, terrorised the denizens of the Durham countryside and gobbled cattle and sheep for daily snacks.   The worm was so huge that it could curl round a hill three times. 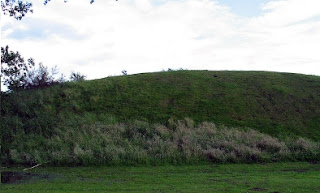 [Worm Hill, Fatfield, Co. Durham] It was at the foot of the hill where Lord John has dispatched the infant worm down the well. 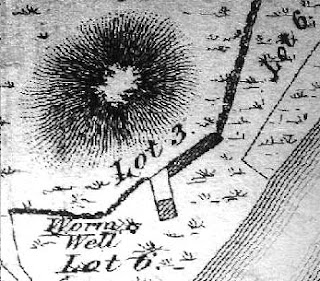 On return from the Crusades he considered it his duty to destroy the obnoxious slithering beast which, meanwhile, had only been pacified by eating the Lord John's father out of house and home and into bankruptcy. After taking advice from a witch (which witch is unclear) the errant Lord was able to chop the worm into chunks - but, in doing so, brought upon himself and his family a tragic and long-lasting curse. 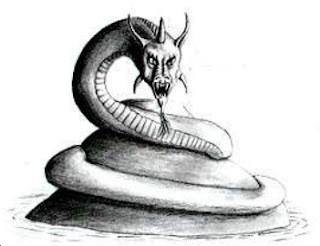 It is from the strangely inventive mind of Mr Peter Huntley...

...one-time transport consultant and now GM of Go Northeast, that a huge range of route branding has emanated.  This is but a small selection.

Service 71 from Chester-le-Street to Sunderland is the "Lambton Worm" complete with a more friendly picture of the said non-arthropod invertebrate. 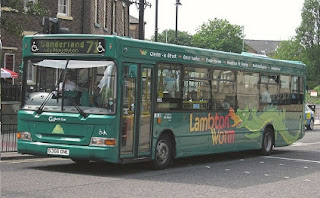 In 1867, a song commemorating the legend was composed.  It is in a Durham dialect and thus almost incomprehensible.  Our reader is invited to un-mangle the final stanza. 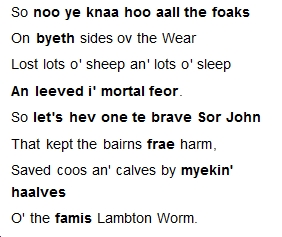 Peter Huntley's choice of name for the service 71 gives some cause for concern, however, because ... 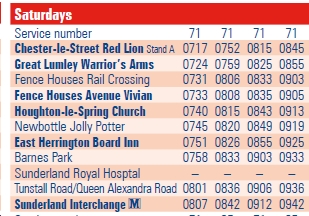 ... it doesn't go via Lambton!   The modern Lambton is a suburb of Washington new town - whereas the "Worm" (aka service 71) does pass close to the older New Lambton, near Houghton-le-Spring. Lambton Castle is further north and nearer to the new, but not "New", Lambton. Heeeeelp!

More on the location of Lambtons later in a future blog.   Certainly the 71 does travel through land once owned by the Lords Lambton, and once prowled upon by the eponymous and mythical worm.

fbb is uncertain about the long-term commercial value of "silly names" for bus services. BUT, if you must have a silly name, make it REALLY silly.  Indubitably that's "The Lambton Worm"!   Not at all sure where the flames come from as Mr Worm lived in the river Wear ... steam, possibly; bad breath, certainly; fire, unlikely.

A year or so ago, fbb was treated to a handsome meal at a pub in Sunderland; you've guessed it - 'twas "The Lambton Worm".   Worm Pizza was NOT on the menu - shame.   Macaroni cheese, anyone?

Next blog : due Monday March 28th
Posted by fatbusbloke at 03:09