It's the study of bus stops.


fbb has just coined the word from the latin "subsisto", I stop, halt or rest.   "Subsistence" is a state in which you are stuck, stopped, halted or permanently rested.  [Here endeth the English Language lesson.]  Well, it's no worse than ferro-equinology for an interest in railways; that's latin again, from "ferrus", iron: "equus", horse.   So for all you budding subsistologists, fbb offers a quick tour of the basics. 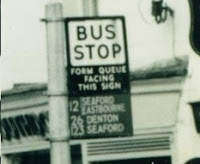 Once upon a time most bus stop signs looked like this one from the Southdown area.   Maybe an upmarket operator would add the company name ... 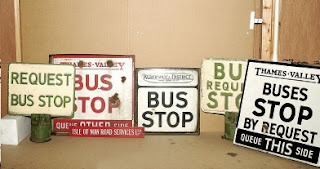 ... but the result was pretty basic and straightforward.    We all seemed to manage quite well, except perhaps in busier areas when something extra was required.  London Transport's world renowned logo became the standard for the buses throughout the Metropolis from 1933 onwards. 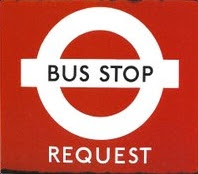 To the basic sign could be added little stove enamelled plates with numbers of bus routes serving that particular stop; all in slots made out of bits of brass and screws.  Impressively tactile and well-nigh indestructible:- 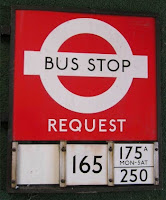 Once upon a time it was decided (by whom, we know not; possibly the Worboys Committee which in 1963 developed the UK version of so-called "continental" road signs) that a standard bus stop would be designed so that we could all recognise one wherever we might be in the UK.  Just in case we could not read, the words "Bus Stop" were to be embellished by a picture of a single deck bus. 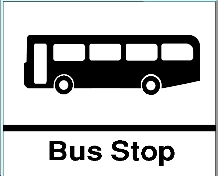 And thus the modern, standard, rather boring bus stop was born:  except in London where the existing design was so iconic that the world would end if the logo were removed and/or if the ravens escaped from the Tower.   Whatever happened to that helpful (!) standardisation?
Well, someone invented marketing, branding, silly names and logos. So they had to be added to the signs to help the poor perplexed passenger spot the stop.   Or perhaps to boost the over-inflated egos (and over-inflated bank balances!) of the marketing men 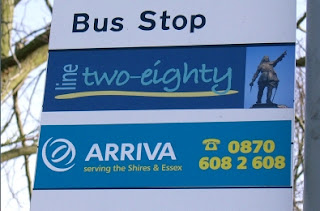 So here, instead of a nice tidy plate labelled "280", we are looking for "line two-eighty", presumably driven by some mediaeval knight in shining armour.
Meanwhile, in London, it gets more and more complicated as stops accumulate a wide range of so-called essential information.   This, below, is a classic!   Try taking all that in as you rush breathless to jump on your chosen vehicle - perhaps not - as you watch said vehicle zoom past because you had missed the "bus stop not in use" whilst peering pathetically at the parsimonious print size. Then competition brings, not only a multiplicity of bus operators, but a collection of "flags" of dubious quality as each company strives to promote its service. 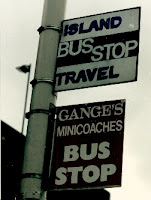 Where does it all end?  Is it helpful, or does confusion overtake commercialism?   What about "make it simple, stupid"?   Maybe we could learn from Paris:  what could be simpler than this?

One fond memory bubbles up in fbb's agile brain.  (?)   The East Midland bus company, based in Chesterfield and now part of the great Stagecoach empire, was a "dab hand" at economy in its subsistology section.  The company simply painted the words "BUS STOP" on a convenient surface, maybe a fence, a wall, a lamp post, or even the kerbstone!

A computer-cobbled re-creation from fbb is the best that can be offered - but that is how it was in the rural environs of Chesterfield.  Now here's a thought ...
... did they ever paint one on a cow?   Surely not!   Maybe if East Midland had operated in the celebrated yachting town on the Isle of Wight ... ? 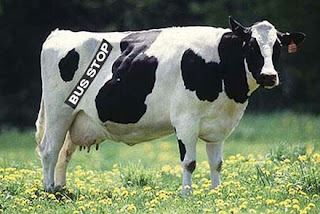 There so is much more to the humble bus stop than initially meets the eye.   Subsistologists unite! to promote usefulness and quality as fbb and other committed (?) enthusiasts go most genuinely "up the pole" and "round the bend" to pursue their interest!

Next blog : due on Friday
Posted by fatbusbloke at 06:43