Doff your Cockers in Bolton?


Doffcocker is a suburb of Bolton lying some 3.5 miles from the centre just short of open moorland on the Chorley Old Road.  One proffered explanation of the name is that an early visitor was obliged to "Doff", i.e. remove, his "Cockers" i.e. stockings before crossing the local stream.  Hmmm. 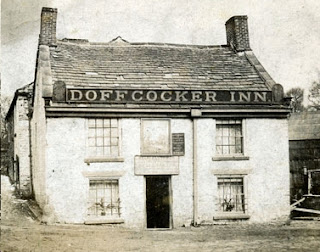 A more plausible explanation is the the name comes from two anglo-saxon words meaning "dark" and "water", describing the same stream where the early tourist supposedly had his unwelcome paddle.  Either way, it was the location of a toll gate and refreshment stop on the turnpike to Chorley.  The more recent Victorian hostelry is a more spectacular building, shown here with a Bolton tram lettered "O" at its terminus.   The Doffcocker Inn still trades today and sits close to where all three local bus services converge. 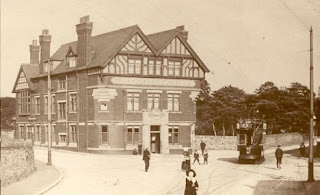 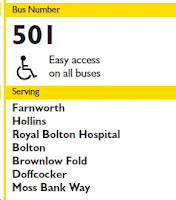 ...the Stagecoach 125/126 service to Chorley and Preston via Chorley Old Road, the long pull uphill from Bolton Centre; every 10 minutes ... 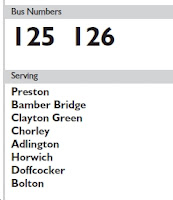 The point of this investigation is to show that, compared with  "some other cities in the North" the information on the leaflets is correct, clear and consistent.  Likewise every leaflet contains an easy to understand map (e.g. the 501) ... 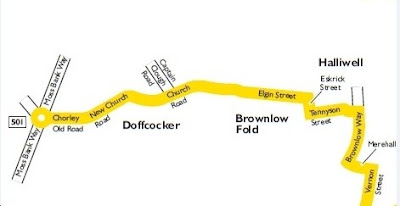 ... with all significant roads labelled and helpful district names added.   Greater Manchester PTE also publishes a series of detailed and comprehensive area bus maps - again, accurate and consistent, as per this extract from the Bolton district offering. 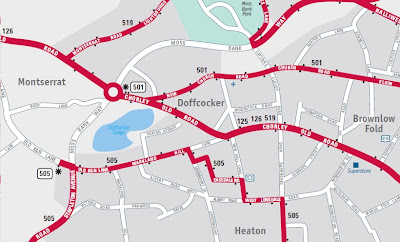 The map extract also shows the route of the 505, every 30 mins to Markland Hill (Old Kiln Lane) then continuing every hour via the huge Middlebrook "retail park", Bolton Wanderers Stadium and Horwich Parkway Station to terminate in Horwich itself.  This route "grazes" the edge of Doffcocker but, correctly, does NOT claim to stop there; unlike the route listing policy of some other PTEs (!). 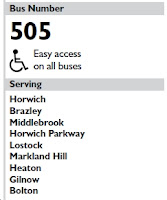 fbb has travelled to Doffcocker by bus to visit friends; has used the information available and it really works.  If you are thinking of visiting the area, a ride over the moors to Chorley is particularly enjoyable on the top deck of a splendid Stagcoach steed (seen here leaving the soon-to-be-rebuilt Bolton bus station). 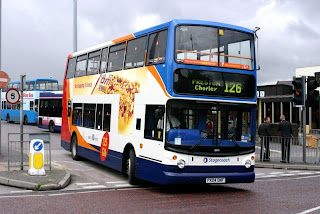 As an added incentive, the intrepid traveller can break their journey at the popular watering hole and feeding station, Bob's Smithy Inn.   Bob's smithy was opposite the pub.

The big question of the day is, of course:-  If Greater Manchester can get it right, why does a certain authority on the other side of the Pennines make such a mess of things?   Perhaps Tr*v*l S**th Y*rksh*r* could learn from the success of others?

P.S.  Bolton Archives provide this lovely snap of Bob's Smithy Inn in 1910 - with the smithy itself opposite. Both the pub and the road are somewhat enlarged nowadays. 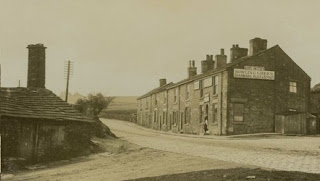 Next blog : due Monday March 7th
Posted by fatbusbloke at 02:33