Friday March 4th marked the launch of a new fortnightly periodical about passenger transport.  The remarkably appropriate title is ...

... which must win an award for originality.  It is run by a particularly "heavy team" which includes Robert Jack and Andrew Garnett (NOT the one who ran GNER trains) who have both jumped ship from the ailing New Transit,

which (consequently?) only managed one "monthly" issue for January AND February.

New Transit began ages ago as fortnightly Bus Business, edited by an energetic Peter Stoneham, and renowned for excellent news coverage.   Bus Business was very much the magazine for the management classes.   In a series of mergers and takeovers this morphed into "Transit" but, somehow, the dynamism of BB seemed to evaporate.

Routeone (pronounce it italian style and it sounds like a type of pasta) is free and on-line and, like its recently re-launched "competitor" (available over the counter at all good newsagents), Bus and Coach Professional, seems directed at the "vehicles and engineering" side of the business.

Both rely heavily on adverts for new and second hand buses and coaches.   B&C does offer something of a scoop on its website, namely a video (ex YouTube) of a song about Preston Bus Station. 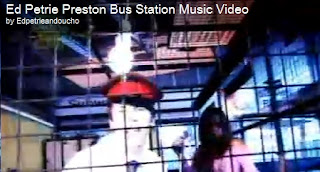 Juicy!   Then there is Buses (once Buses Illustrated), very much geared to the bus enthusiast market with many pages listing in detail the purchase and disposal of operators' vehicles.

.
It is good to know that Firstcoach London's Wrongge Bodied Paxman Paranormals are now in service with Arthur Daley Transport of Saxborough.  Cool.

And that's only looking at Buses.  To emulate the status of, say, Modern Railways, PT would need to search out technical journalism of the quality of Roger Ford; and who knows more about fares that Rail's Barry Doe? Both of these gurus are routinely tackling hefty industry problems with excellent knowledge and consummate journalistic skill.  A tough nut to crack.

So where does Passenger Transport fit in?  First impressions of a complimentary launch issue suggest that it is recreating the original Transit.   For "management" but still lacking the "punch" of  Bus Business.  Launching anything is tough these days, but PT's website underwhelms.   Apart from the "masthead" all that is on offer is:-

Perhaps fbb may be accused of pushing his own particular (and jaundiced) opinions, but what is lacking in ALL these periodicals is "incisive" journalism from the passengers' point of view.   (Barry Doe excepted, of course!) After all, without passengers we have no industry!
For example, PT offers a "mystery shopper" article about Cardiff Bus by Alex Warner (this time, sadly not accompanied by his pet greyhound!); who enthuses about its excellent service but, arguably, overlooks the complexity of city centre stopping arrangements in the Welsh capital. 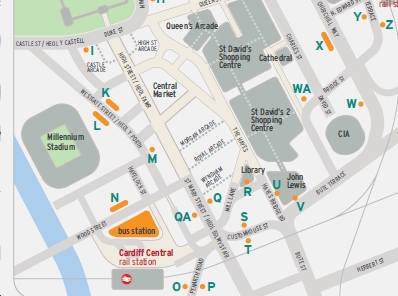 Especially confusing are the varied arrangements at certain times of the day and when the Millenium Stadium is replete with wonderful welsh voices singing the praises of "Cymru" and "rygbi".   This extract shows Baycar's different Friday evening route, a common but confusing delight (?) shared by many of the City's bus services.. 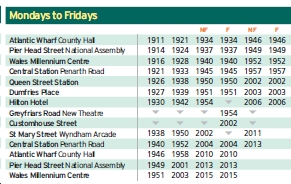 Whilst not Cardiff Bus's fault, these deviations to diurnal service delivery are less than helpful to Joseph Public esquire, and, fbb suggests, should get a critical mention.

PT has an excellent article on the struggle of German Railways [DB] in its homeland, Chris Cheek's analysis of company results, and, of course, a bit more fearnulation*.   There is plenty of news; but still with the on-going suspicion that we are in the realm of "journalism by press release" rather than up-front reporting.  Perhaps finances are such that the noble ideal of "real hackery" is, as yet, impracticable.
The magazine dropped through the letterbox on the same day that fbb was invited to do three days "supply" teaching at a nearby school.  For what it's worth, fbb's pedagogic pronouncement on Passenger Transport has to be, "a good first effort, but I expect to see an improvement next time.   B minus."

*fearnulation : (not yet listed in the OED) : The embarrassing adulation of newly appointed bus bosses who are expected, as a basic minimum, to perform unbelievable and instant management miracles.

Next blog : due Wednesday March 9th
Posted by fatbusbloke at 02:41