To summarise:  TSY has just introduced a technically superb interactive map service.  It is very, very clever; but, like all modern technology, only as good as the data that has been stuffed into it.  And here the cracks begin to show.  Trivial things like ...

... are just a minor irritant.  Airports?   How many are there?  [Answer: there is ONE!] And it did find lots of places but refused to divulge any information as they are "not in South Yorkshire" ...

... so why bother to include them?   Probably because they are already in some database or other.   But the fun starts when having a investigative click on some buttons near to Dobbin Hill, fbb's initially looked-for location. 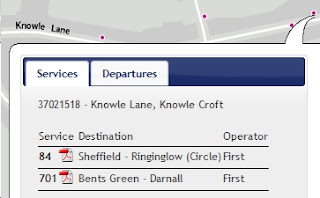 There is no "real time" information for either of these and arguably, as a once or twice a day run, the 84 needs to offer its few riders some confidence.   Meanwhile the 701, a school service, links as usual to a timetable ...

... for service 53!   There is nothing in common between the two routes except dodgy data management.

Further database limitations appear when you do a "map search" for the service 83 which you have spotted labouring up the steeply sloping Ringinglow Road;  the list of services ... 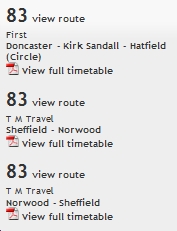 ... includes the 83 in Doncaster and bits of the Sheffield 83 that go nowhere near Bents Green.   Again, this reflects the unthinking way in which the database is interrogated.  Or, maybe, the map is simply trying to do too many things at once.   This is where confidence evaporates into confusion.  Thus, the highlight (the lowlight) is the offer of an 83A. This really stumped the otherwise knowledgeable (why do people call him "big head") fbb.

This 83A runs between Worksop and Everton, both of which are in Nottinghamshire and should have nothing to do with South Yorkshire.  But you are WRONG fbb (surely not - it simply cannot be). It does serve South Yorkshire:  at one solitary stop in Gainsborough Road Bawtry.

Google Street View even provides a picture of that throbbing centre of South Yorkshire life:- 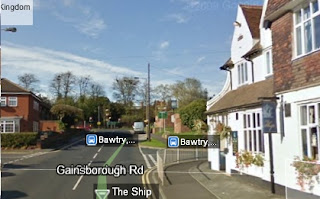 And what about a timetable for the 83A in case a slightly inebriated South Yorks traveller wants to use the bus to stagger homeward from an evening carousing at The Ship?   Tough luck, the mouse click takes you to ...

... services 218 and 240, passing, ironically, pretty close to Bents Green and nowhere near Bawtry.   Just for the sake of completeness, fbb has found the timetable for the 83A in Nottinghamshire's data. One journey a day in each direction Monday to Saturday and serving one stop in South Yorkshire. 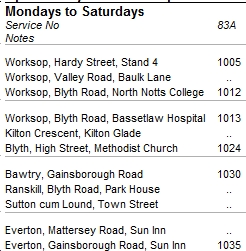 Thanks TSY for that useful information - we could have never managed without it!   With our Blackberries on fire with all this really useful "stuff", how can we possibly go wrong?

Part One's questions are worth repeating here.  Is this information for information's sake?   Is this an example of "we have the technology, so let's provide it"?   How many people use it?   And, more importantly, of those who use it, how many find it useful?

It is worth repeating both of fbb's oft stated "mantras":-
Never let the technology tail wag the information dog.
You can either be comprehensive OR comprehensible, but not both.

Perhaps fbb could go to Magnolias (Batley West, Kirklees District) and buy some ... erm ... magnolias?   Not possible, because TSY refuse to provide any information for that stop.

Oh, and THAT stop on Ringinglow Road, near Dobbin Hill. 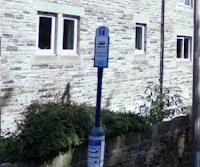 ... and it has taken fbb nearly an hour to dig that diamond of bus data from the convoluted computerised coal measures.  So why not tell the truth and say "ONLY school bus 715 stops here".  And here's a map to prove it:- 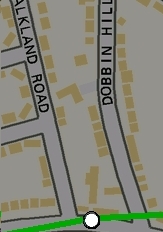 A contributor suggests that it WILL be served by the summer weekend (only) infrequent service 284.   So there might not be that long to wait after all.  Maybe only a matter of weeks before a "normal" bus comes!  In 2010, route 284 started up on 28th March (just before Easter), but, needless to say, no mention (yet?) on TSY's site for 2011!

Next blog : due Wednesday March 30th
Posted by fatbusbloke at 07:48