Returning from a "jolly" to Winchester on Tuesday afternoon, 15th March, fbb followed his customary practice and had a quick surf to see if anything exciting had happened on the information super (not always) highway.   And the show-stopping news is that the "bloggers friend", Travel South Yorkshire [TSY], have revamped their website.

The new site has lovely shading round the search boxes ...

... and lots of swirly "stuff"; all of which (presumably in response to a fat fee for the web designers) make it so much easier to "find and understand the information we need".  (Space for the readers' own derogatory remarks!)

One of the dangers of a revamp is that search engines take time to catch up, so Google gets rather more lost than it should.   You get this when you ask about "changes and disruptions":-

But back back to our story.

Our growing readership (yes, amazingly!) will, doubtless,  remember fbb's rant against  TSY's (mis) handling of a timetable change for service 70.  (read again)  In a glowing tribute to the power of blogging, fbb was able to report (read again) that TSY, just hours after the original blog appeared, had removed the erroneous timetable and binned the incorrect leaflets.

fbb is anxious to check when the new timetable (for the evening AND Sunday service 71) is available.   So, he asked the new site to find service 71 - the Sheffield area 71 ...

... service 71 was listed as appearing on 27th March.  Have a house point, TSY, you have sorted out your blunder with consummate (and very unusual) speed.   Three Cheers!

But look closely and you would have seen:- 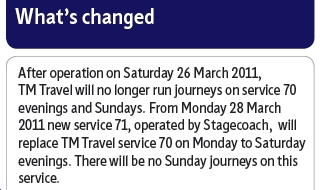 There was the old, WRONG, leaflet with the old WRONG information. No Sunday service, it said, when there is an hourly Sunday service. They had put the old timetable back.   But at least the web site has lots of swirly bits; and that's far more important.

Or so it appeared until the afternoon of Wednesday 16th March.

Sadly your energetic blogger has been trumped, finessed or otherwise hoist by his own petard - because by Wednesday evening 16th the CORRECT timetable had, at last, appeared - some six weeks after neighbouring Derbyshire published their version.  And all's well that ends well.

But perhaps not quite?   The new Sunday timetable pages correctly show the route right round the loop in Killarmarsh (from Bridge Street Via Rowan Tree Road, High Moor and Norwood back to Bridge Steet). Well done that man - someone's got it right;

BUT the Monday to Friday and Saturday schedule still finishes at Killamarsh Bridge Street (the first time) - no timings for the loopy destinations.  Underdone!

When Tim Berners-Lee "invented" the internet, his vision was for a simple, robust means of accessing information.  Web designers have taken over and now provide us with loads of swirly stuff, twiddly pictures and gorgeous graphics.

Commentators complain in chorus when a web site doesn't have lots of pretty "stuff". Where once a web page was defined by a dozen lines of simple "HTML" code, we are now obliged to "enjoy" highly complex clutter which takes ages to appear on-screen and doesn't always work on all systems. It also costs megabucks, paid for by the customer, of course!

Meanwhile the actual information provided is less than satisfactory or just plain wrong because changes can only be made by some clever contractor who understands "design"!

Keep it simple, get it right and bin the twiddly bits!

* Redux - a literary term used when a topic, a scene or a character is (surprisingly!) brought back.

P.S.  As part of fbb's "be helpful to TSY" campaign, he can reveal that the new service 293 timetable (Sheffield to Dronfield; starting Monday 9th May) is now on Derbyshire's web site.  Jump to it lads, you've got less than 2 months to be sustainable  See if you can get this one completely right.


Click on the image below to get a readable version. 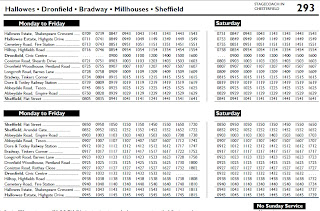 Next blog : due Friday March 18th
Posted by fatbusbloke at 08:13