Farewell to a much despised edifice?


From the proverbial year dot, Northampton Corporation buses always departed from stops clustered around All Saints Church, bang in the centre of the town ; this picture from the late 1940s. 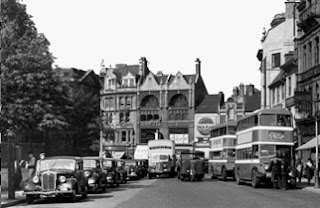 United counties operated from a magnificent under-cover station in Derngate, a few hundred yards away.   A 1930's art-deco styled building, it had a restaurant ... 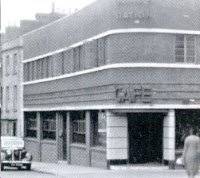 ... patronised by the county "blue rinse brigade", an enquiry and tour booking office and a snack bar.

Two things of great import happened at the Snack Bar.  In 1958 it was where fbb ate his very first bag of cheese and onion crisps, then manufactured by a semi-local firm from Leicester, called Walkers!  It was also at the adjacent Departure Bay 1 in June 1972 that fbb, heroically on bended knee, proposed to the future Mrs fbb.  This was to the amusement of passengers waiting for the 402 to Irthlingborough and to the great embarrassment of his fiancée; who probably should have "got out while the going was good."
fbb confesses to being really glad she didn't, though. 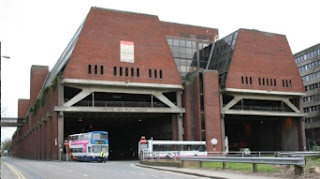 Then, momentously in 1976, everything, NCT, UC and some independents moved to the Borough's newly completed Greyfriars bus station to the north of the town centre and linked by subway to the brand new Grosvenor Shopping Centre.   The new facility also had a café, enquiry offices for both main operators and pleasant seating for waiting passengers. 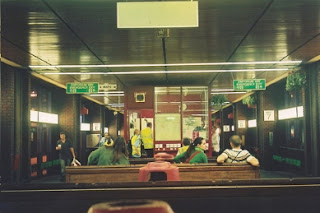 But all this luxury (?) and convenience is doomed, doomed and even doomed!
The owners and developers of the shopping centre have proposed a doubling of the floor space, achieved by demolishing the bus station.  The structure was always gloomy and once won an award as the building that people would most like to blow up.   It is owned by Northampton Borough; the offices above it are empty and, ever desirous of making a substantial pot of filthy lucre, the council likes the idea.  The plans give a rough idea of what is proposed. 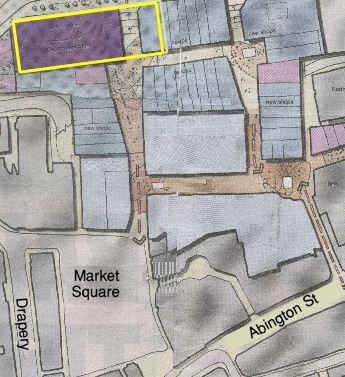 For those not familiar with the historic home of the shoe industry (fbb's grandmother was a "clicker"), the lighter blue in the middle of this diagram is the original Grosvenor shopping centre, the darker blue and purple at the top form the extension and the yellow box shows where the despised Public Transport Mausoleum is.
What will happen to the bus station?  The developers don't care and are providing no alternative location; whilst the Council is, surprise, surprise, somewhat silent on the matter.

The cramped site doubles as the Stagecoach depot, so they have been given notice to quit and offered a fat wedge for cancellation of their lease.
Our Northampton correspondent (who is thanked for sending fbb the stuff) reports that the 12 year old "executive" from the developers (on duty at the public exhibition of the plans) seemed to have no idea of how busy the bus station could be and was suggesting a glorified layby situated on the wrong side of the town centre inner bypass road.   Meanwhile, in a council report we read:- 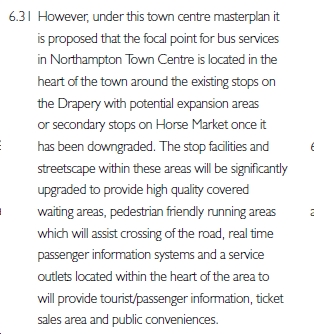 So, according to the carefully considerate and consultant controlled council, approximately 20 busy bus stands are going to be located in a street (The Drapery) that used, in the good old days, to host just 6.

Illustrated: Northampton in "the good old days" showing the three town centre bus stands.  This is Abington Street but stands were similar in the Drapery.   Today's Drapery is shown below with stops served by buses to and from Greyfriars; not standing there as they would in a bus station.

Space for 10 bays on each side of the road? Pedestrian friendly?  Not a chance.

Of course, the government and all our noble local authorities have a well developed "green" agenda, stressing the importance  of public transport, modal shift, integrated timetables, travel to work policies etc. etc. (blah blah blah.)   All of this will happen, as soon as funding can be found; and provided that it does not offend the vocal private motorist lobby and thus lose votes.   And making money from a shopping centre is so much better that having a bus station. Cynical, moi?   Surely not!
So not much hope for a proper bus station then?   Try a snowflake in you know where!

Next blog : due Friday March 25th

P.S.  fbb has "borrowed" the two pics of Derngate from the excellent "Memories of United Counties" published by Silver Link at £17.99.  Go out and buy it!   It's not the usual book about buses (although there are plenty to see), it's about the ordinary people who kept things on the move.
Posted by fatbusbloke at 03:37