Shevington Moor Is All On Line ... 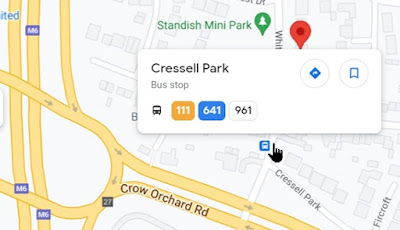 In attempting to advise technophobe Richard as to the best way to visit his elderly cousin at Shevington Moor, fbb has identified the nearest stops to coz's domicile and the buses that stop thereat. The 111 runs in both directions whereas the 640 and 641 are opposites. At a quick glance, fbb could also discover the destination of these routes and a departure list from the stops. 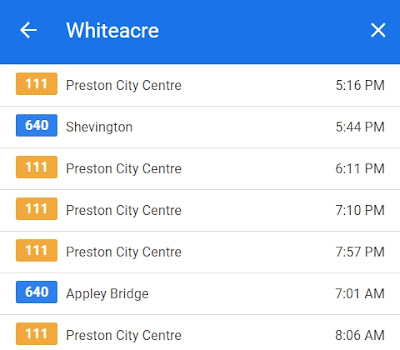 This is fine if you are going, but not much good if you are coming. In any case Richard would be happiest with some sort of timetable extract, even if it were perforce rudimentary. Richard is well aware that his chances of obtaining anything in print to accompany him on his travels are less than nil.
In the back of fbb's mind was the shadowy memory that the 111 in Lancashire was once operated by Fishwick, a company now deceased. 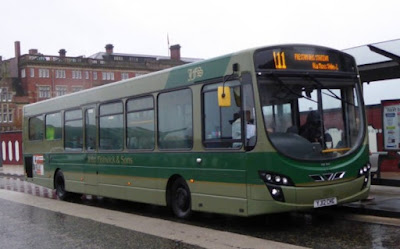 An even shakier nuance of memory was that the 111 was taken over by Stagecoach when Fishwick died. There were a few pictures on-line that offered some confirmation of that snippet of shadowy Poirotesque "leedle grey cell" activity. 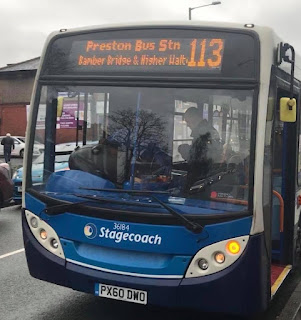 But whether that was still true after Covid, staff shortages, the efforts of Mr Putin and the vagaries of our shaky commercial system of bus operation, has to be somewhat uncertain.
One source of timetable information is, or course, Traveline. The list of 111 services was quite long and fbb will not print them all here ... 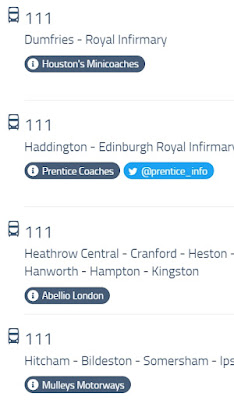 There are 18 111s nationally and none of them ran from anywhere in Lancashire. So had the Stagecoach's 111 followed Fishwick's ditto to the great bus garage in the sky - had it ceased to be?
Asking Traveline suggested that it has, like the parrot, shuffled off this mortal coil! 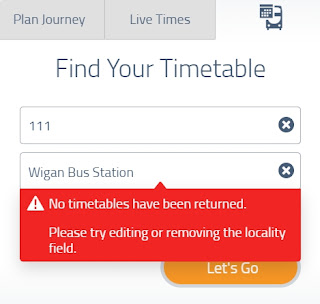 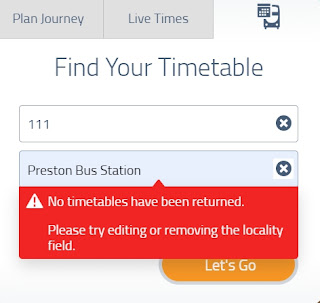 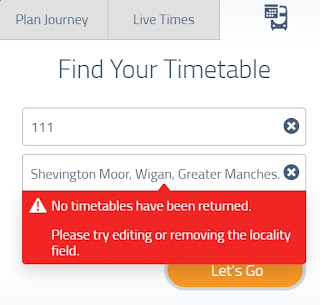 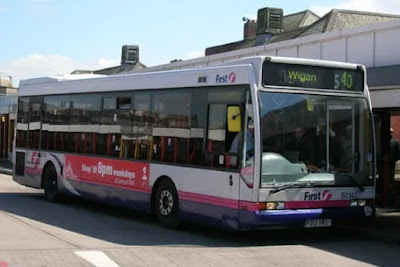 ... and indeed it was. Of course First threw in the Manchester towel spectacularly a while back and sold the whole caboodle (except the Busway routes) to Go Ahead. Previously they had sold off their Wigan depot to Stagecoach, So, once again, it was anybody's guess which company might provide a timetable for Richard.
But doesn't the TfGM (formerly Greater Manchester PTE) have an up to date "Timetable Library" on-line? They always used to have one and it was easy to find from their home page.
Try finding it now!

TfGM have an unusual definition of "easier" in their vocabulary! Try "Journey Planning"?
It is most definitely NOT a timetable! 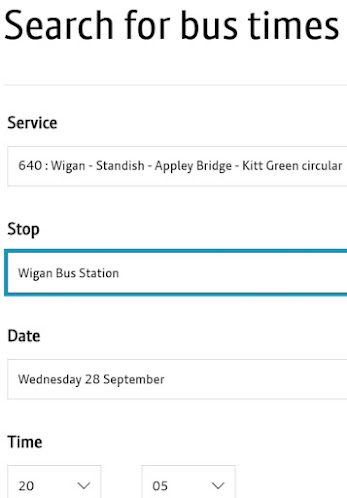 What about scrolling down? Hooray. "Timetables". 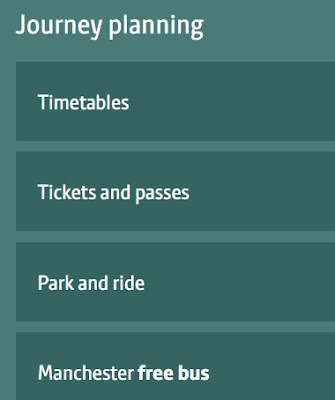 That just takes you back to the search for bus times" page as shown above. Grrr!
Where is that pesky timetable library?
Or has it, like so much that is useful on line, been consigned to the electronics dumping ground in favour if the slow and tedious Journey Planner?
After some brain crunching frustration fbb tried "Bus Routes" - another clickable box on the same multi-(dis)functional page. 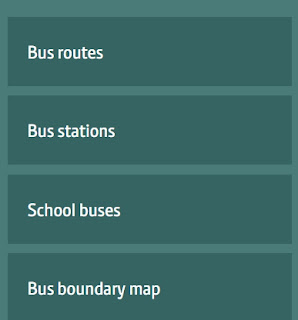 And there was a list of bus routes in numerical order.
How nice.
fbb discoverd by brave experiment that if he clicked on one of these little boxes ... 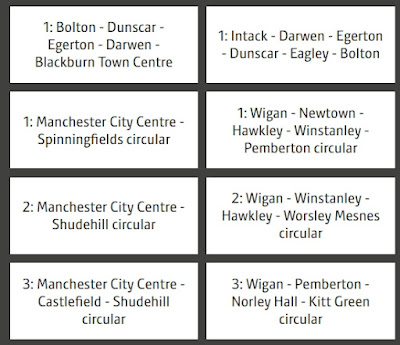 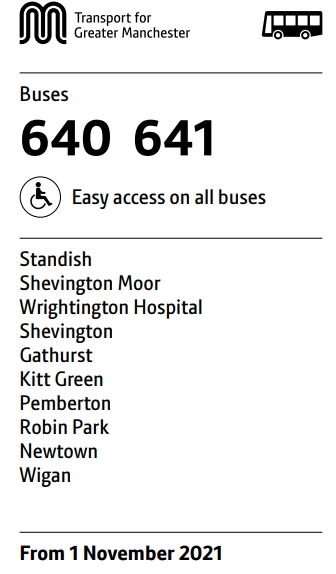 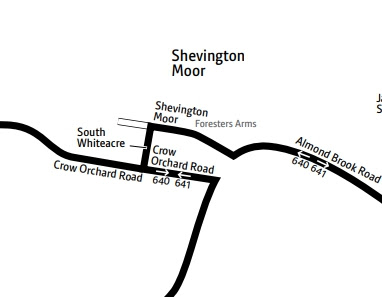 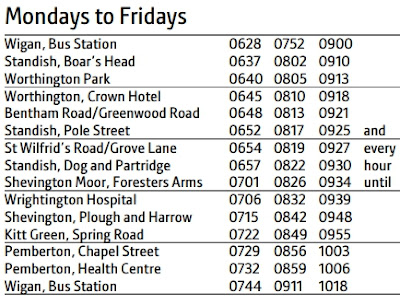 So fbb was able to call Richard back (after The Archers, of course) and guide him to his coz's pad. fbb could even tell him to get off at the first stop past the Foresters Arms (assuming the pub still exists!).
It looks open on Streetview. 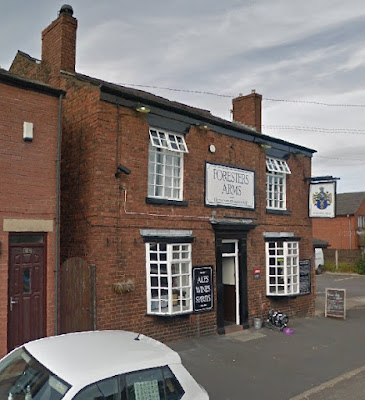 fbb was so excited that he had unravelled the Gordian Knot of public transport information that he completely forgot to check whether TfGM thought the 111 existed.
Traveline interspersed journeys on the 640 (CORRECT) ... 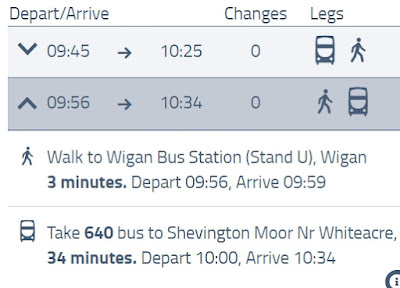 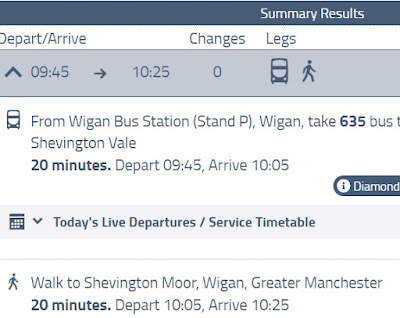 ... but with not a dick bird about the 111.
But the 111 is still there in the TfGM well hidden, almost secretive, timetable library.

It is still operated by Stagecoach (probably not according to Traveline?) with one bus an hour running through to Preston and back.

If it actually exists it would be a tad quicker than the 640.
Only time will tell whether Richard actually made it to his cousin's, or, whether, like tens of thousands of other former bus users, it was all too complicated and he simply gave up!
Who could blame him?

Blogging Pressures!
Yesterday at 12 noon fbb sent off 186 timetable pages to the technical people that make GoTimetable Sheffield happen. These updates had been completed in less than four working days since the delayed data appeared in an accessible form.
Approximately 30 of those pages are not yet fully updated but have a groveling apology on them.
The changes happen on Sunday 2nd and Monday 3rd.
On Monday 26th September a chum was in Sheffield and was given the instruction by fbb to spy out any information about the changes.
There was absolutely nothing to be seen!
Whilst most poor quality spreadsheet timetables had appeared on-line by that Monday morning the main operators were not so helpful.
fbb received an email from First Bus yesterday ... 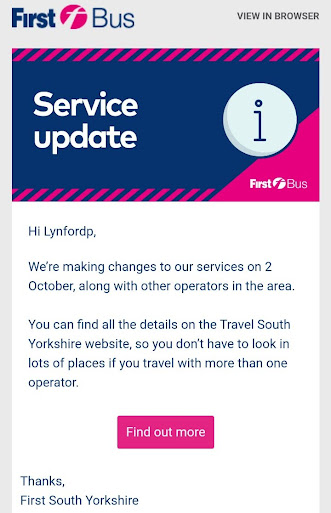 ... which, effectively, said "First Bus can't be bothered"!
Stagecoach does a better job but keeps it all several clicks away from the home page.
Changes to timetables from 2nd October
21 Sep 2022 to 12 Oct 2022
From Sunday 2nd October there will be changes to some routes and timetables in South Yorkshire and North Derbyshire.
You can find full details about your service on our October Service changes page.
Here you will find the Stageoach changes.
T M Travel lists the changes but no timetables are obvious.
The following new services will start:
8/8A - Birley - Crystal Peaks (Monday - Saturday daytimes) and Sheffield - Birley (evenings and Sundays)
9 - Sheffield - Darnall (Monday - Saturdays) and 9A Sheffield - Darnall - Manor Top (evenings and Sundays)
31 - Sheffield - Hillsborough - Loxley
41 - Sheffield - Frecheville (certain journeys Monday - Saturday)
117 - Rotherham - Bramley
142 - Alfreton - Belper - Nether Heage
150 - Clay Cross - Alfreton - Matlock
181 - Sheffield - Dore
X7 - Sheffield - Maltby
Hopefully, fbb's final batch of updates will get there on time.
Have A Break : Have a Re-Build 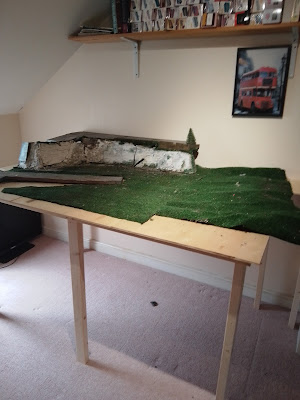 As a bit of relief from the tension of timetable transferring, fbb began the process of moving his scenery onto the new baseboard area.. Next comes track and re-wiring. The engineering team ... 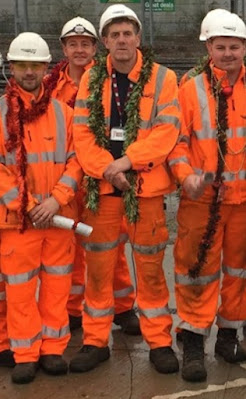 ... well, fbb with a screwdriver, moves in next week.
A Cake For Philip 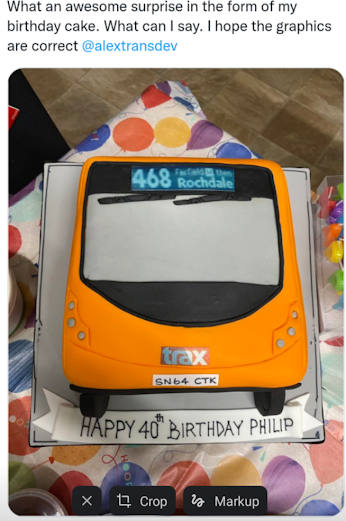 The windscreen isn't quite right - but who cares, it's a splendid cake. Here's the real thing ... 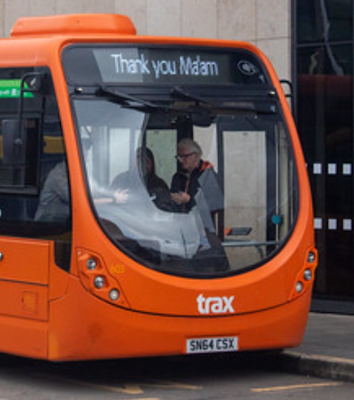 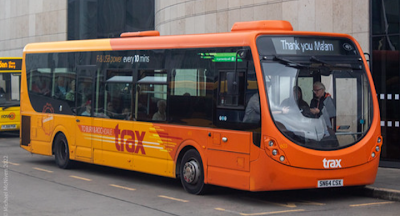 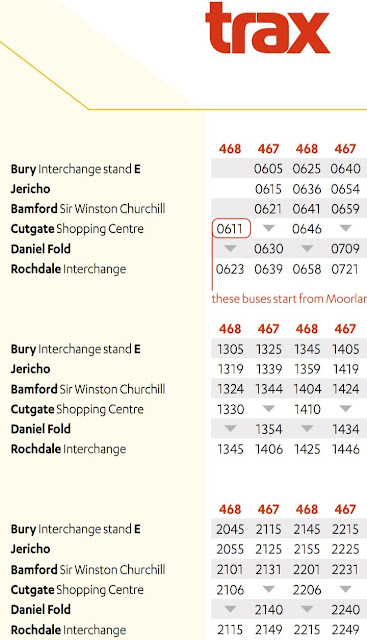 ... running every 20 minutes on the joint 467/468 service.
fbb has no idea who Philip the Twitterer is! But he does like orange-iced cake!
Tomorrow we go to a town the size of Northampton - but in Europe.
Next metro blog : Friday 30th September
Posted by fatbusbloke at 02:00