Catch A Bus, Your (Overseas) Highness 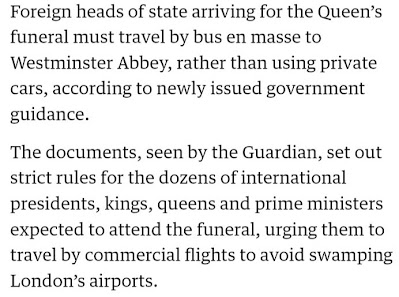 fbb remembers his Granny's funeral at the Counties Crematorium Northampton on what was then the southern edge of the town. 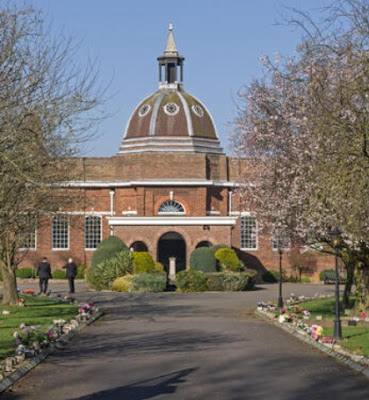 There were dark mutterings among the mourners because she had ben at the front of the funeral "procession" and it should have been her!
fbb's mother opined that funerals always generate controversy.
The idea of going by bus from a Park and Ride near Heathrow was not a popular decision, with many VIPs concerned about their loss if dignity. 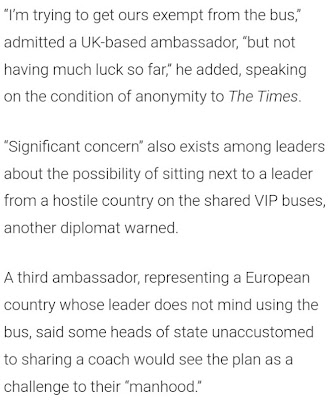 Nevertheless, the "buses", actually very posh coaches are seen below ... 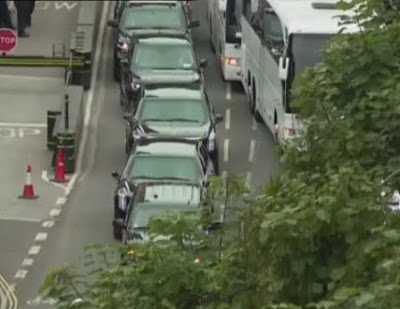 ... waiting to get on the alighting only stand to unload their passengers. In the shot above the coach queue is being overtaken by the motorcade of a guest who, apparytnly, missed the bus.

That is a certain Mr and Mrs Biden who were chauffeur-driven and missed the view from high up in a luxury coach. They must have been disappointed.
Here the "route W1" from Windsor delivers members of the Royal Household ... 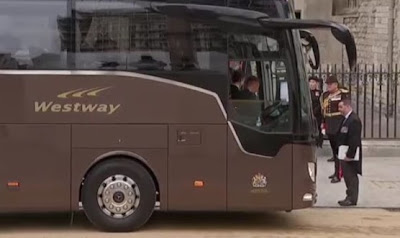 ... no low floor exit here - but helping hand from the Inspector (Blakey?) supervising the unloading from the pavement.

As expected, the Funeral Service was both moving, sombre yet richly positive, remembering again HMQ's resolute Christian faith.
fbb hopes his readers will not be offended by just a snippet of levity. When he takes a funeral, and with the mourners' permission, fbb likes to lighten the atmosphere a little to help the congregation relax.
For his sister's funeral, he asked the small collection of mourners to turn and wave at the cctv camera which was broadcasting the service to her elder son who lives in Poland.
It did the trick!
The "best bit" of yesterday's funeral?
It has to be the sermon from ABC. ABCs' sermons at official functions are often bland, "inclusive" and spiritually ambivalent.
Yesterday's definitely wasn't! An extract from the fine words of ABC Welby: 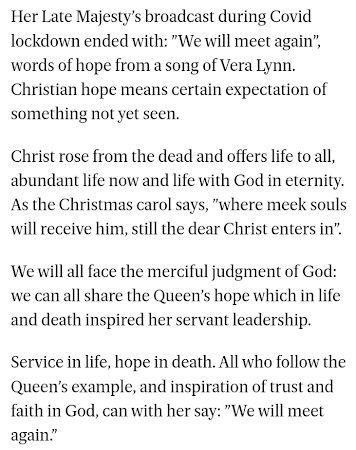 The Gospel (Good News) of Jesus the Christ, the Saviour of all who choose to "get on the bus" (as per yesterday's blog!) was well covered .
Great!
But You Need A Mystery 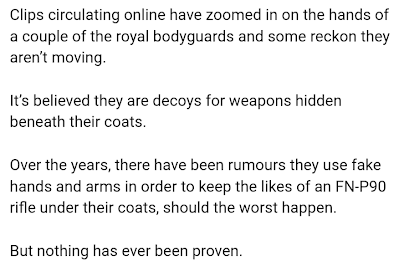 Certainly the bod in the above screen shot held his hands very still and in a very unnatural pose! 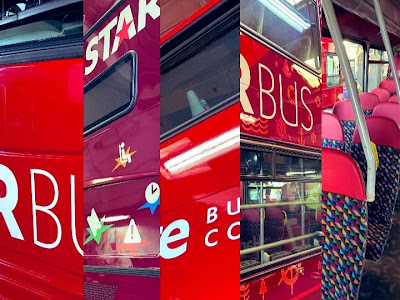 There are already a number of bus "Stars"; Blue Star ... 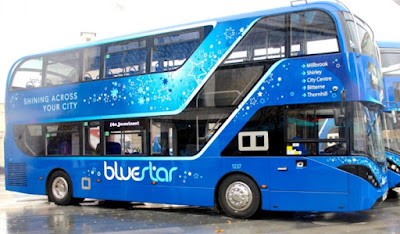 ... formerly Solent Blue Line. There is First's "Star" along the coast a tad in Portsmouth.
Then there was Silver Star ... ... of Porton, near Salisbury.

But what this Star Bus "tease" will become is a bit of a mystery. What we do know, however, is that the tease was twitted by Alex Hornby ... 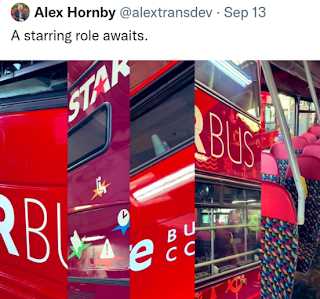 Still very excited!
It's Not April 1st, Is It? 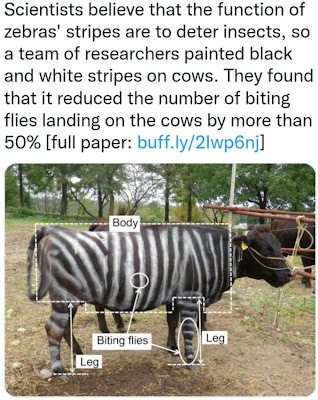 It is really helpful that the twit compiler of this twitter has indicated which part of the cow is its "body" and clearly labelled two of its four body parts called "leg". Does the animal have a "head" or a "tail"? We should be told!
One equally notables part is not labelled, even not attached, so it might not be a cow after all, It might be the udder sex.
GROAN!
Next freight technlogoy blog : Weds 21st Sept
Posted by fatbusbloke at 02:00