Back in 2015 the "partnership" was formed to give Sheffield folk improved frequencies (it didn't), simpler and interavailable fares (it didn't and a quality service that Sheffieders could be proud of (they aren't). It was all rebranded Buses for Sheffield which was going to be as wonderful as the partnership wasn't.Since those optimistic days, hiding a reduction in the number of buses on the road, and leapfrogging fares increases (with no collusion, of course. Yeah right!) things have continued to deteriorate,
Sicye then there has been no meaningful promotion of bus services in the city and, surprise surprise, passenger numbers have continued to fall.
Services 7 and 8 are a joint operation shared by Stageoach (7) and First (8).
So how has the partnership reacted to the "Build Back Better" policy so ably demonstrated by Grant Shapps pretty booklet. As the operators grind painfully out of the Covid crisis and seek to welcome back passengers who have been frightened away by the Government "don't use public transport" publicity, we can see how this all works out from this coming Sunday.
Currently, the 7 and 8 do run jointly from Ecclesfield in the north oft he city ... 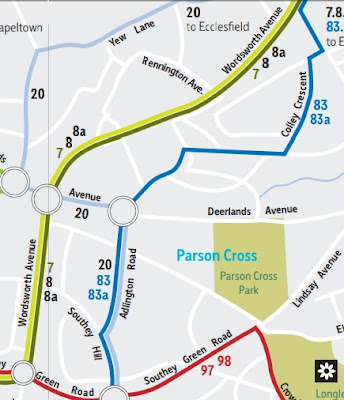 ... and continue south east-bound to Manor Top still also called Elm Tree after the pub; which has not looked too good for some time. Actually the pub was named after "Elm Tree Hill" the more ancient name of the location. Manor is a big former council estate and its "top" is the highest point of the estate.
From Manor Top the Stagecoach 7 (MUD GREEN) serves Woodhouse and the suburban shopping mall at Crystal Peaks (the big blob, bottom right. 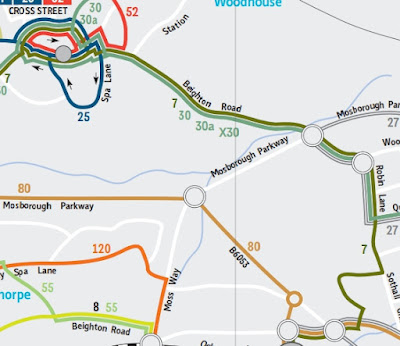 Meanwhile First Bus 8 (YELLOW) visits the estates of Base Green and Birley ... 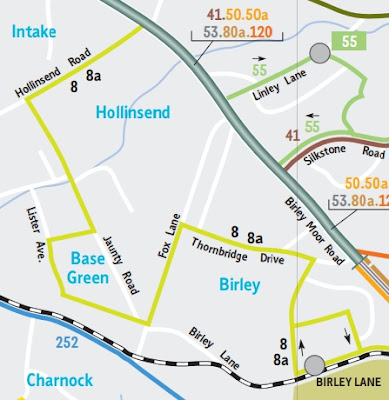 ... before it, too, trundles off to Crystal Peaks using two different routes through relatively new housing.

There has been a knitting together of three very traditional Sheffield Transport routes. The 49 ran via Wordsworth Avenue north of the city and is largely unchanged. 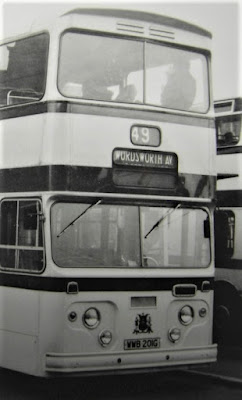 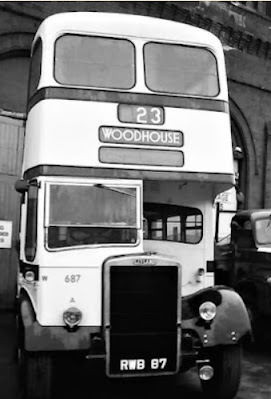 ... also conceptually unchanged whist the bus to Birley has been pretty stable under various route number, but historically 83. 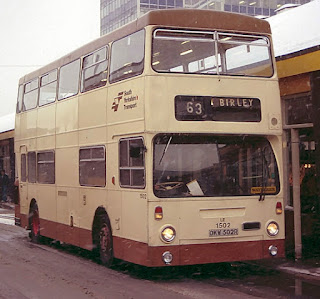 The general perception is that the extensions to Crystal Peaks, which have hitherto only operated Monday to Saturday daytimes, are the weakest part of the "partnership" timetables.
As part of the partnership, the joint service has recently been advertised as two separate services, reduced to every 30 minutes each, jointly every 15 ...

We can now ask how have the two partners reacted to the current crises of staff shortages, fuel prices, Covid and the downturn in passenger business. What will happen from Sunday 2nd.
Stagecoach
The following bus timetables in Sheffield
will not change;
1, 2, 2a,  7, 7a , 26, 26a, 61, 62, 65, 65a, 73, 74, 75,
130, 88, 201, 783, X17
So the residents of Wordsworth Avenue, Manor Top and Woodhouse can still travel unimpeded with Stagecoach.
But we are all agog as to what First Bus will do. Will it be the same as their "partner"?.
Weill, again in the true spirit of partnership, we do not know for certain. Travel South Yorkshire have provides a text summary but, as yet, no timetable.
From Sunday 2 October there are route and timetable changes. Service 8 is curtailed to Birley Tram Station. For journeys to Crystal Peaks, please see TM Travel services 8/8a.
Evening and Sunday services will be operated by TM Travel and only run Sheffield - Birley. For journeys to Parson Cross/Ecclesfield, please use Stagecoach service 7.
First service 8 timetable to follow.
So First's route will go no further than its historic terminus at Birley, which is now enhanced with a tram stop. 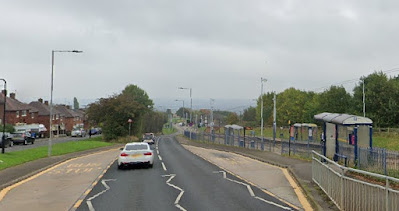 To continue eastwards you need to change, either to a tram of from a No 8 bus to a No 8 bus, or perhaps an 8A.

But perversely this service, to be run by T M Travel from Monday 3rd, does not stop at the Tram Stop (apparently) but serves a stop called Newstead Avenue back in the estate. 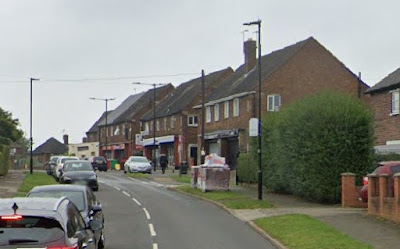 But in the opposite direction it does run to the Tram Stop, so that is clear.
But there's more! In the evenings and on Sundays, buses did not run on to Crystal Peaks anyway. But when we look at this timetable we find there are evening buses from city centre to Birley only, but NOT run by First.

It looks as if First is backing out of later evening service completely, leaving the Ecclesfield end  in the hands of Stagecoach 7 alone.
It's a right mess.
It WILL put existing passengers off travelling at all!
Building Back Buses Better is again seen as a superb success.
Potty!
And this sort of re-organisation is being replicated all over South Yorkshire.
---------------------
The excitement of Prestwin wagons continues tomorrow!
Next Variety blog : Saturday 17th September
Posted by fatbusbloke at 02:00