fbb and Mrs fbb were spending a few days in Glasgow with a "mature" friend, Julia, who had never visited the Clyde before. P S Waverley had not yet started her cruising season and fbb was anxious to give Julia a taste of a sail "doon the watter". The Gourock to Kilcreggan ferry seemed a good substitute; nay the only substitute! 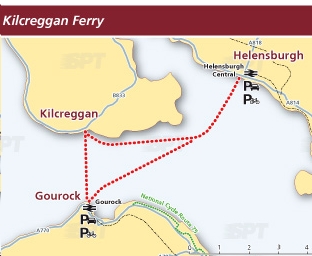 Kilcreggan is on the Rosneath peninsula, between the Gare Loch and Loch Long, both significant inlets off the Firth of Clyde. 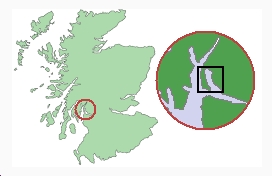 Like so many of the waterside settlements pre WW2, the main public transport was by ferry. The various railway companies all operated competitive services and it was a challenge to the masters' seamanship to see which boat could get into the pier first to snaffle the hordes of waiting passengers. 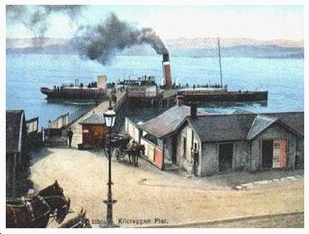 But post-WW2 changing tastes and working conditions led to a terminal decline of the "big" ferry services, replaced on certain routes by dual purpose car carrying vessels. Kikcreggan was served by Caledonian MacBrayne [CalMac] via a triangular route from Gourock and Greenock.

By the late 1970's this route had been sub-contracted to Clyde Marine Services Limited.  In the 1980s responsibility passed to the Strathclyde Passenger Transport Executive [SPT]. The owners were in need of an extra ferry and at a Southampton boat show their eyes lit upon Hotspur II ... 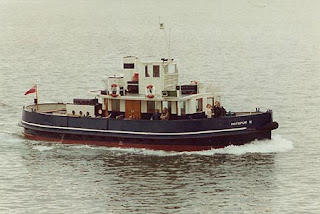 ... which had been plying its merry trade between Southampton and Hythe since 1936. See "High Five for Five Hythes" (read again). A deal was struck and in 1979 Hotspur II moved north and after some refurbushment and re-fettling the vessel re-emerged as "Kenilworth". It soon became the main provider of the Helensburgh service, 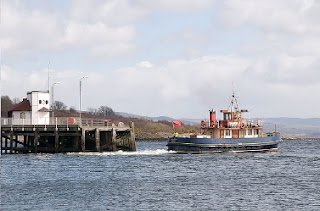 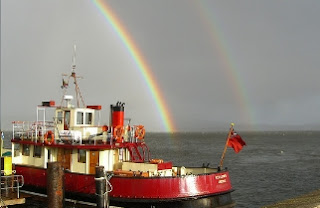 In March 2007, however, this elderly lady was retired from ferry service but continued to provide cruises for another two years before finally passing to a private buyer after 73 years of valiant service.

In service between Gourock, Kilcreggan and Helensburgh she carried over 2.1 million passengers (and countless millions more when in Southampton Water) and sailed the equivalent of thirty times round the equator. Some tub!

The short passage  is 1.6 nautical miles and, given good weather, the views are stunning; as here with the hills behind Kilcreggan still dusted with the remains of winter's snow. Aaaaah! 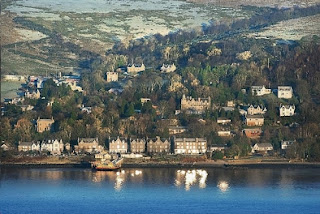 Some trips continue an additional 3.4 nautical miles to Helensburgh.

At Gourock the boat docks alonside the busy car ferries to Dunoon and a short step along the platform of the train station. 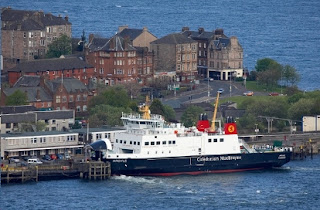 Thus a round trip is possible:- by train from Glasgow to Gourock, by ferry to Helensburgh then train back to Glasgow. Multi-mode rover tickets are available offering excellent value.

To commemorate Kenilworth's retirement from ferry duty, SPT produced a fascinating handbook outlining the long and complex history of the crossing. fbb has stored a PDF copy to read or download here. Warning : it's a big file.

Next blog : due Sunday July 31st