Maltby, like Dinnington, is a mining town, enhanced by burgeoning commuter estates. It is served by a 10 minute frequency First route from Rotherham (numbered 1 and 2, alternative ways round a big loop at the end.) There is also a service 10 which serves the so-called "model village" originally built for the pit workers. If you could be bothered to look, you might find details of these buses on a Travel South Yorkshire [TSY] "spider map". There's is the top one ... 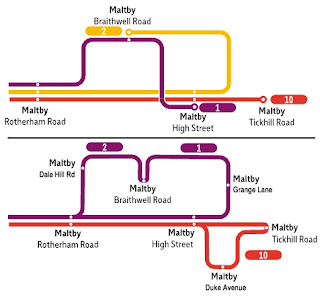 ... and it's totally and utterly and unbelievably wrong, in every possible way. fbb's offering (below) is passably correct. But our mission is to examine service 18 from Doncaster to Dinnington (Episode 2; read again). The good-old East Midland route in 1987, for example, was relatively simple ... 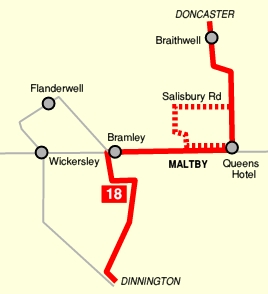 ... every hour seven days a week until late evening, supplemented Monday to Saturday daytime by short workings via Salisbury Road to Queens Hotel. 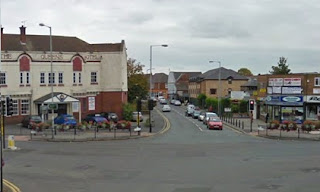 Then these journeys turned round and went back the same way.
These frustrating foibles are based on the leaflet for revised services starting on 24th July. First foible:- 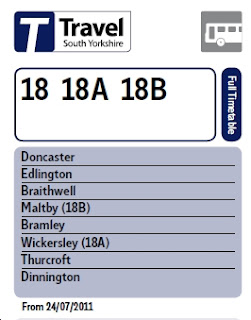 An innocent observer would read the cover page and, sensibly (because that is what it says), assume that the bus from Doncaster to Maltby was the 18B. WRONG! The 18, 18A and 18B together provide the hourly service seven days a week to the Queens Hotel in Maltby. So that's a good start.
Next we look at what is changing from 24th. 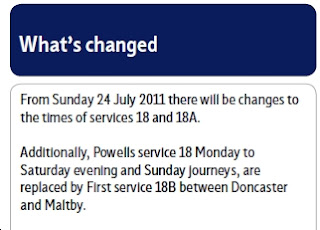 NOT QUITE. Services 18 and 18A are totally UNchanged during Monday to Saturday daytimes. But there is no service to Dinnington evenings and all day Sundays. Would it not be better to simply say so, rather than convolute to confuse? But then ...

... accuracy is Travel South Yorkshire's overriding aim, as we shall see. Service revisions in recent years have taken half the hourly service and sent them via a significantly different route from Bramley onward as an 18A, namely the green line on this fbb map. 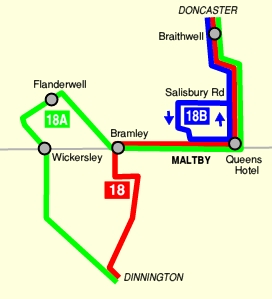 Foible two. Despite the fact that probably the most important feature of the "green" route is its foray into Flanderwell's Fleming Way estate (seen here with a First bus on a service from Rotherham), there is nary a mention of this in TSY's timetable. 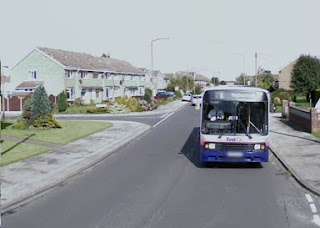 Unless you looked at the helpfully unlabelled map in the leaflet ... 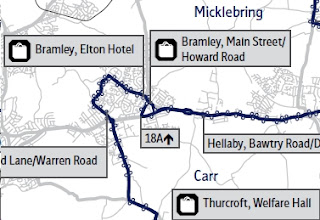 But, the worst is yet to come. Foible Three.
Back to those replacement evening and Sunday 18B journeys that terminate at Maltby. As shown on the fbb map above (blue line), this a a one-way loop. They use Salisbury Road, as in the good old days, but offer some confusion at Queens Hotel. 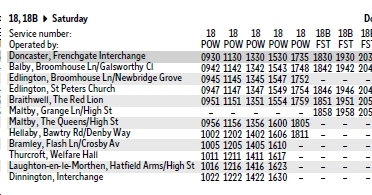 TSY thinks they don't stop there! Of course they do! Here's the stop on High Street, with the cream coloured Queens Hotel in the right background ... 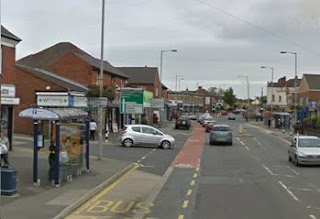 So a line of times for Salisbury Road with the xx58 arrival at Grange Lane printed against Queens Hotel and, once again, everything is clear. The same can be done on departing trips because, guess what, all other 18s and 18As to Doncaster are timed at "Queens Hotel". On their own version of the timetable, First show it correctly.

For the curious, the Grange Lane stop is just round the left hand corner at the crossroads, here on the right of the picture. 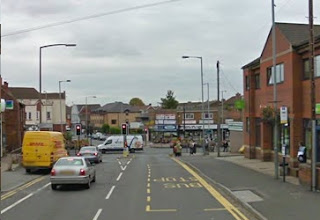 Surely all buses will wait for their departure time in the nibble-sized layby in the upper photo?

But poor prospective passenger need not be at all perplexed; the journey planner routes you from Salisbury Road via Rotherham to Doncaster. This only adds an extra and unnecessary 40 minutes to the journey. 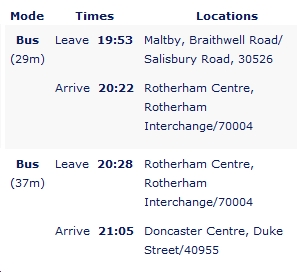 We aim to provide information that is as accurate as possible. [TSY]. Quite.