Sunday marked a whole raft of significant changes to services from Travel South Yorkshire [TSY]. The "official" launch of Optio Orange was decidedly underwhelming, but fbb is able to bring you some splendidly exciting party games to help you celebrate.
1. Hunt the Thimble Timetable
First Bus runs a service 73 from City to Margetson Crescent. It runs every 10 minutes as seen here ... 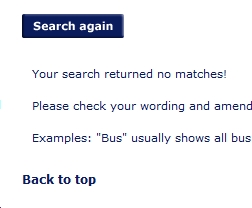 Another 73 runs to Clowne, but only Derbyshire seems to want to reveal the timetable:-

It starts at Crystal Peaks shopping centre, hardly an insignificant location in the County; and the only link from there to Clowne. TSY doesn't admit to the 74 either. 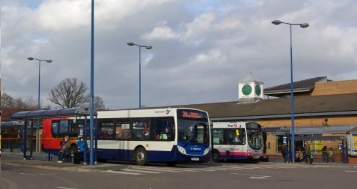 Also, the Sunday 257, from Deepcar to Holmfirth, remains a total secret. Only the operator, (Tate's Travel), seems to know that it runs. Passenger paucity probably pervades! 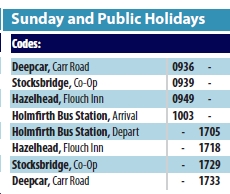 Do feel free to take a copy, SYT.

After nearly 100 years (blog in preparation) we are told that the bus service along Rivelin Valley Road is at an end. 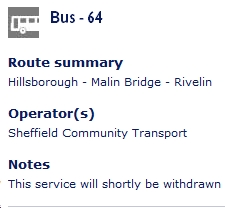 Certainly this is what the "forthcoming timetables" told us as late as 1730 on Friday 22nd July. But is that the truth, the whole truth and nothing but the truth?

NO! There is a replacement. It's easy to find. All you need to know is that it's numbered M64. But no mention on the old 64 pages, or even as a "new service". Another chance to play an information guessing game. 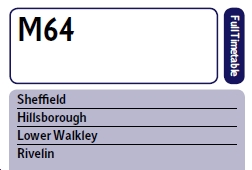 fbb gathers that the leaflets may be ready in about 10 days. Might not have heavy loadings for a while yet? Once again, TSY doesn't want passengers to tarnish its shiny new service.

Stop Press : The website still gives service 64 as "current timetable" on the morning of 25th July. It last ran on 23rd!
And the 49 to Killamarsh has been withdrawn; Seach for it on-line and, see, it's no longer on its leaflet with the 25 and 27.

Of course, as you might have guessed, the 49 still runs every 30 minutes, albeit somewhat revised. You can find it by looking for service 50. Obvious, silly of you not to know that!

Stop Press : The 49 HAS now appeared (a.m.Monday 25th), at last, indexed under "49". Well done chaps!
3. Follow My Leader Timetable (if you can)
Services 206 and 216 are very different from the X5. Their route in Sheffield is on traditional ex Sheffield Transport served roads via Attercliffe (206) or via Manor Top (216), 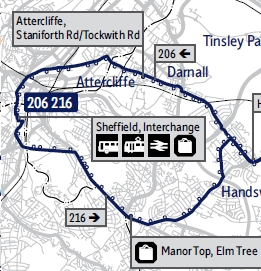 whereas the X5 uses the non-stop Sheffield Parkway. TSY doesn't bother with road names on its maps, but fbb promises, that's the way they go. 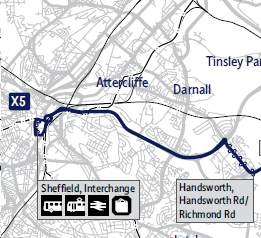 But the printed timetable in the leaflet does not recognise any route variation. How very helpful! 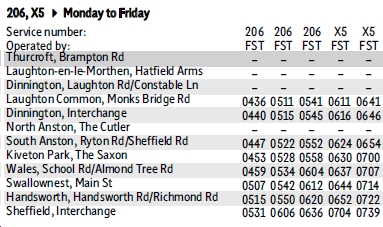 Notice the huge and obvious difference in time points between the 206 journeys and those for the X5. Presumably you have to guess when the bus might drop you off at Attercliffe or Darnall. As clear as mud.
4. Ghost Hunt

Also on the X5, please note that Stagecoach [SSY] operates some evening journeys, as here, whereas First runs the rest [FST]. 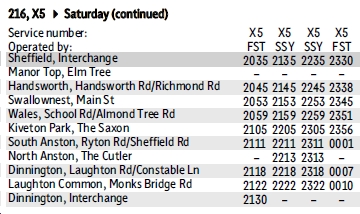 Look, the Stagecoach journeys call at North Anston but the daytime service doesn't. Now that creates a tricky problem, because to get from South Anston to Dinnington, you are obliged to pass, and call at, North Anston The Cutler. For some reason or other, First Bus decides to by-pass that pleasant suburban hostelry.
fbb pored over copious maps to try and check the route. The leaflet suggests that First ...

... and Stagecoach use exactly the same roads!

Good of TSY to print the same information twice!

Then a chum sent a picture which explains all. THIS is how First manages to miss out stops at The Cutler. Sorry it's a bit fuzzy, but the bus was moving very fast indeed. The landlord of The Cutler issues hard hats to all his regulars. 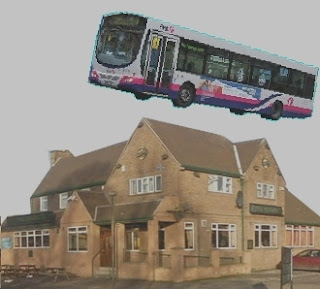 It does, however, make for a spectacular ride! 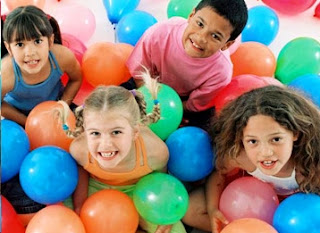 Next blog : due Tuesday July 26th
Posted by fatbusbloke at 07:09