No. 3 son writes about a recent, and not uncommon, occurrence with the much lauded smart card system in London.

I wasn't let out of the system last night as I had already touched out ...

... somehow by getting on at Willesden Junction and having the temerity to get off at Watford High Street. The phantom touch out monster had already touched me out before I got to the gates. So "the man" had to let me through the gate manually, having asked how I got onto the network without touching in.
Maybe the parachute gave me away?

"Not so Handy Anderston" (read again)

fbb commented that the mass vandalism of Glasgow in the 60s was a high price to pay for the M8, which now needed relieving.

Speaking ahead of the Royal Opening of the M74 Northern Extension, the Scottish Greens, Friends of the Earth Scotland and Transform Scotland reiterated their view that the new motorway will worsen Glasgow's environment, do nothing to tackle congestion or unemployment, and that it remains a poor use of hundreds of millions of pounds of public money. 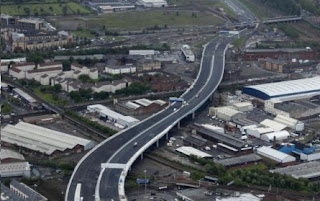 Milton Keynes Meets Railtrack : are we spending money wisely? More thoughts from our Northampton correspondent.
The prestigious new offices for Son of Railtrack are still being built in MK, the land of the multi-coloured bus. 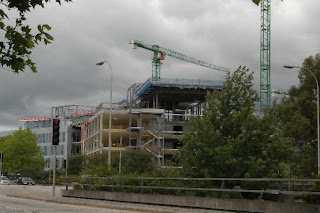 The new offices are on the site of the former hockey / football stadium across the road from Macdonalds (2,487 Big Macs and 2 cwt of fries please) and round the corner from the railway station so they'll be able to watch the replacement buses setting off for Northampton.

A Highlight of Milton Keynes is the wonderfully tidy integrated marketing of the network. It is really easy to spot which bus you want; just look at the colours.

As A. A. Milne didn't quite write
in "Bad Sir Brian Botany" (read the original, here)

Sir Brian had a bus with orange stripes on.
He went round all the villages,
and took folks to the shops.
On Wednesday and Saturday,
Especially on the latter day
He called at all the stops ...

Mind you, you're not the only one thinking ahead - In "Modern Railways" I read:- 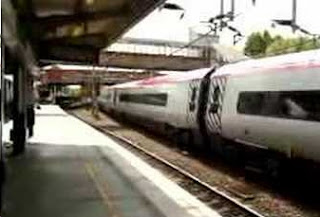 "Northampton station - Platforms 1 and 2 have been extended to handle 11 car class 390 Pendolino trains".

"Where the Heck is Hackenthorpe?" (read again) 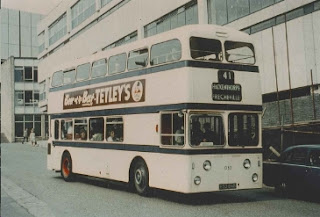 Friend Alan, long-term supporter of this blog, directs fbb to a pic of the INSIDE of the Shanklin Steamer ... 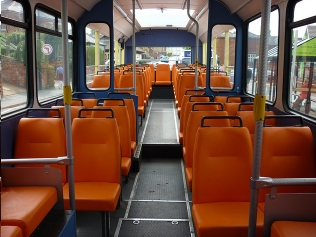 But Usually, Nothing changes here ...

Not really a blupdate, but splendid all the same. A picture from No 1 son, holidaying on the Isle of Wight in July 2011, of a bus museum FLF trundling along past Havenstreet, of steam railway fame. 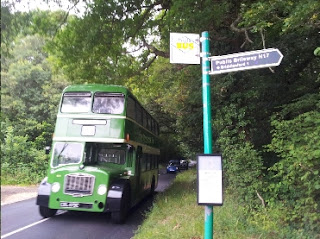 But note the signpost. A further dialect word to goad grockles** to grumble. Nammet**, Gallybagger** and now Brileway. fbb is not sure what it is, but at least it's public, it's N17 and it leads to a diamond at Briddlesford ... 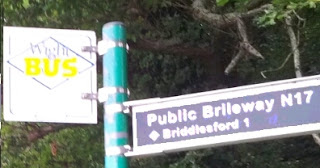 ... or perhaps young Dwayne, on work experience at the County Council, did not get the best marks in his SATS spelling test.

Next blog : due Saturday July 30th
Posted by fatbusbloke at 03:43