Part 1 (read again, here) introduced us to the dubious delights of the former mining village, now self-promoted to being a town, of Dinnington.

But we are exploring what was the East Midland service 18, originally running from Doncaster to Dinnington and continuing to Worksop. The timetable below was in operation in early 1987, a few months after de-regulation but before printed booklets sank ignominiously below the crystal clear waters of the river Don. By then the service ran only as far as Dinnington. 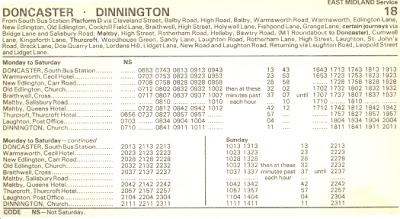 An hourly schedule, seven days a week, including evenings, was supplemented by "short workings" to Maltby during Monday to Saturday daytimes [click on the image for a slightly larger version].The significance of the Salisbury Road times will be revealed in episode 3.
Today's version of the 18 is now operated by Powells, with a depot situated midway between Donny and Dinnington, at Hellaby, just along the road from  Maltby. 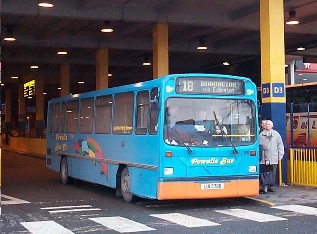 A variety of vehicles has been operated over the years, including (above and below) these from 2004 ... 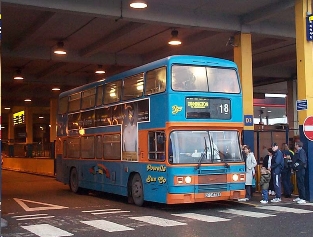 ... both pictured on their stand at the now-abandoned Southern bus station in Doncaster. A subsequent development was the introduction of a significant variant numbered 18A. 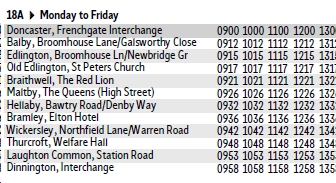 The combined frequency is still every  hour, but with the 18A following a common route to Bramley, then diverting significantly via Wickersley and Laughton Common between there and Dinnington. Our purpose here, however, is to look at routes and information for Dinnington itself.
So here is an fbb map:- 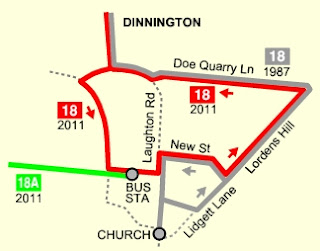 The 1987 version of the 18 (grey line) ran to and from Dinnington via Doe Quarry Lane and Lordens Hill, 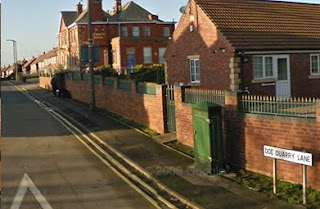 with just a minor one way jiggle near the original terminus at St Leonard's Church. But the 2011 manifestation of the 18 (red line) performs a significant loop, with just a minute's wait in the bus station.

But, as us usual with South Yorkshire Travel, this loop is badly explained.

Top be precise, it isn't explained at all! The only clue to this "loop", historically a significant part of the 18 service, is a tiny little trapezium of anonymous lines on the equally badly labelled map in the leaflet.

The map also implies that all buses run via the school bus park, which, surprise surprise, they don't. TSY's fabulous (a fable, something which claims to be real but is more like a dream, or even a nightmare!) interactive map is equally confusing ... 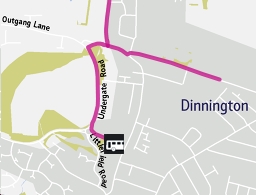 ... on the outward run; but does at least give a pretty purple line, correct but unexplained, for the return journey to Doncaster. 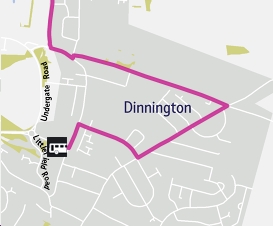 But the journey planner can only find you a 10 minute walk rather than the correct through bus ... 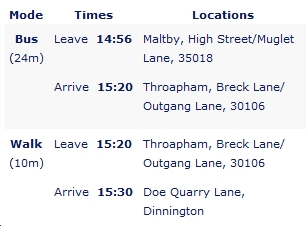 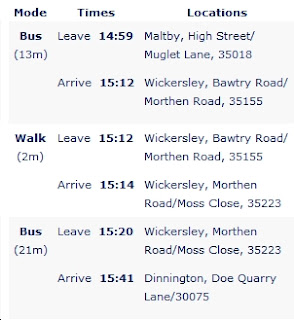 ... an unnecessary (and potentially expensive) change at Wickersley.

How can this nonsense be resolved?  Here is the outward leg of the timetable modified by fbb:- 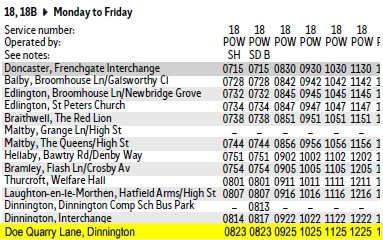 Now, Travel South Yorkshire, that wasn't SO difficult was it? With a similar line (in the right place!) on the inward tables, we would all know which way the bus went. Now there's a novelty!
Oh yes, and you could try drawing maps that are of some use. Interactive and clever software is a waste of time if it doesn't tell the passenger what he or she wants to know; it's just an ego-trip for nurdish technologists.
The next episode looks at Maltby and Wickersley; guess what; that's even worse!
And just as an aside, from 24th July, Dinnington loses its evening and Sunday buses to Maltby and Doncaster etc. completely. Might they have survived if more people had been able to fathom the mysteries of the published timetable? We shall never know.