Tuesday Trip To Topsham (4) by Boat?

Transport observers will be very familiar with the Exmouth to Starcross ferry ... 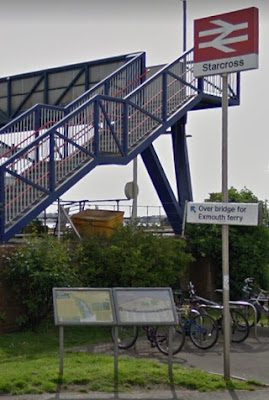 ... which is clearly signposted via Starcross station on the main line between Exeter St Davids and Dawlish. Cross the bridge, walk along the platform and you simply cannot miss it! 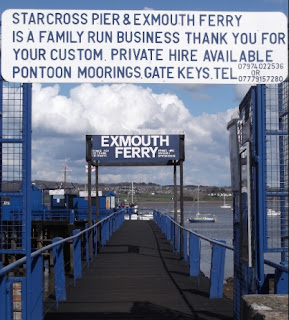 At the Exmouth end it is harder to find. Seasonal open top bus route 95 ... 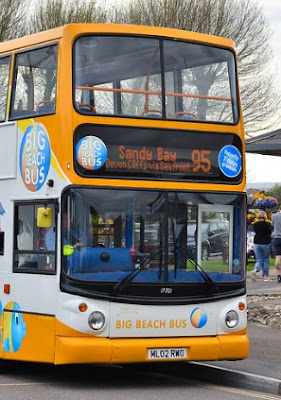 ... stops on the Esplanade or it is a brisk walk from the town centre stops. 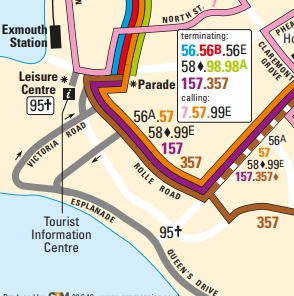 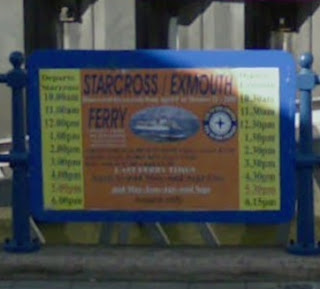 It sails from April to the end of October and makes a nice round trip from Exeter by bus or train. The fbbs have never done the trip, usually remembering their intentions a week after the last sailing of the season! 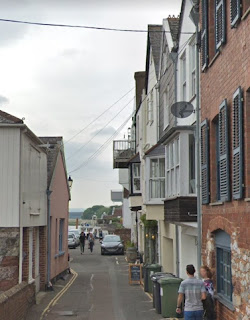 It leaves from Ferry Road (surprise, surprise) a short totter along from the quay. 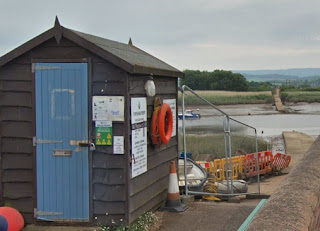 Because it is tide dependant, the day's sailings are chalked up near the "terminal" (don't laugh) ... 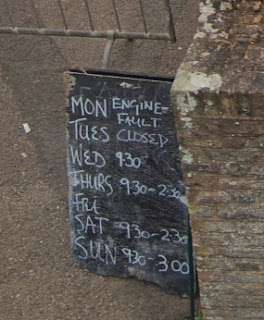 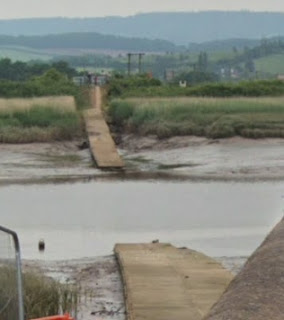 ... nowhere in particular! Good for birds, good for walkers, good for cyclists ... 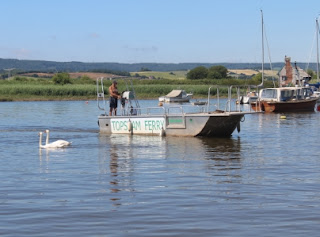 It dumps you near to Lockl Cottage which used to be a cafe, but now is only available as a holiday let. 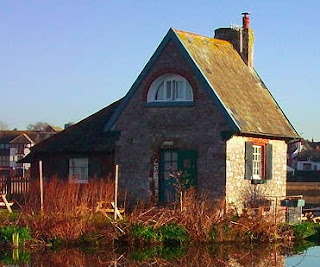 One walk might take you back to humanity at Exminster and in so doing you will pass the former Exminster station site. 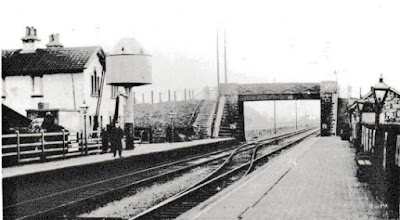 Crossing over the bridge (Station Road, another surprise!) you will see that the station building is extant. 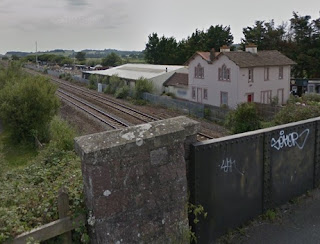 One on-line picture shows the premises being prepared to be a wine bar ... 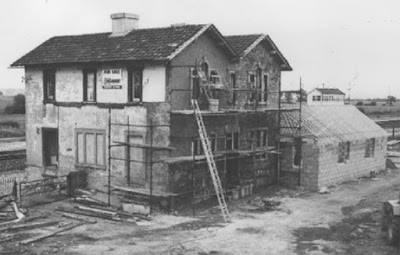 ... but now it is in the hands of Tony who runs a junk yard architectural antiques business from the former station yard. Business must be good as the property is now well-posh! 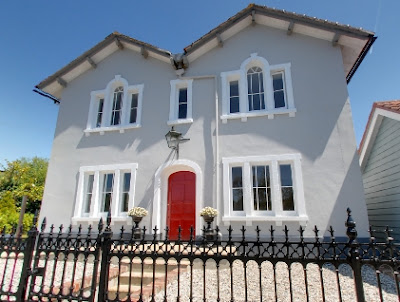 Those of our readers who enjoy the proliferation of antiques programmes on TV will appreciate the idea that Phil Serrell would be in seventh heaven browsing and buying from Tony.

In need of some refreshment after your sail and walk? Next to Tony's is the Swans Nest watering hole ... 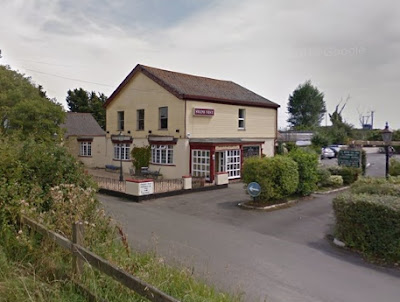 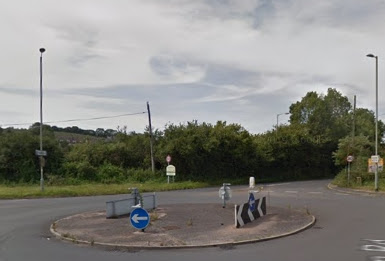 ... are the stops for Stagecoach 2 to Dawlish, and opposite, to Exeter. 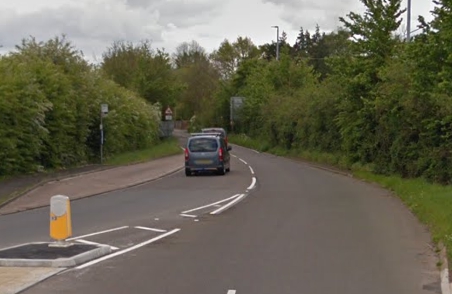 There is no layby or stop pole on the "to Exeter" side, so you presumably balance suicidally on the kerb stone and fling yourself, lemming like, in front of the Hop 2 ... 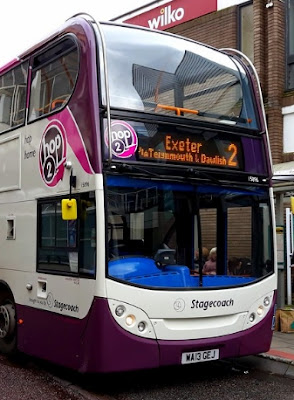 ... running every 30 minutes from Newton Abbot to Exeter. 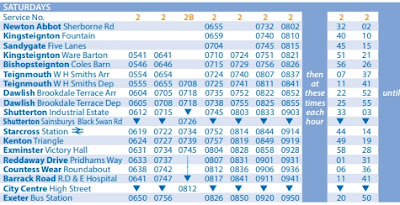 The little ferry from Topsham to Nowhere sails only at weekends through the winter season.

fbb got a bit carried away with Exminster etc, so the other ferry from Topsham, plus the eagerly awaited explanation of Exeter City buses services I, J, K and T will appear tomorrow.

Meanwhile, a couple of snippets. 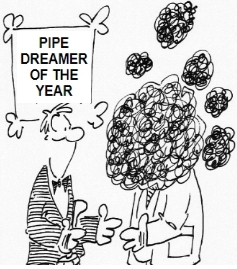 Manchester Mayor Makes a Move?
Manchester press became excited over last weekend with reports of the next step forward in "revolutionising public transport" in Manchester. This is Mayor Andy Burnham's plan to take control of buses and trains in a London-style franchising system. 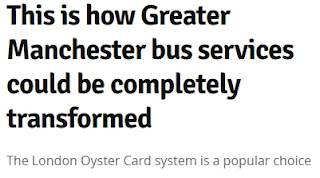 What has actually happened is the the Manchester Regional Transport Authority (politicians!) have agreed that the plan should move on to be independently examined by and independent examiner.

Will it ever happen?

The more thoughtful commentators ask where the money is coming from and, at the last discussion of finance, Mr Burnham announced that he was going to get the cash "from Government".

Public transport in Cornwall has received a significant boost with the Chancellor’s promise of a £23.5m funding package over the next four years for a “Reduced Bus Fares” pilot.

Due to begin in May 2020, Cornwall is the first rural area to be given the opportunity to run and fund a pilot scheme to bring down the cost of travelling by bus.

Cornwall Council Cabinet member for transport Geoff Brown said: “One of the issues for our residents is the cost of using buses to get around. So we put forward a case to the Department for Transport to help us encourage people to use the buses by reducing bus fares.

“If more people use the buses then the plan is that over the four years of the pilot project, the lower cost of fares becomes financially sustainable. More journeys by bus means more fares being paid which means keeping fares down.”

The public perception has oft been expressed that, if bus companies reduced their fares, more people would travel. This is, of course, a reasonable proposition. But the bills still have to be paid, so if fares are reduced by 50%, you needs to double the number of passengers to maintain the status quo.

Next Topsham blog plus - Thursday 3rd October
Posted by fatbusbloke at 02:00