The really keen reader may wish to search for the previous five episodes, but the broad implication is the bus operators are very poor at using their public icons (viz the bus stop, pole and timetable frame) for communicating such trivial detail as where their buses run and what times they might run at!

But before we start this tortuous tale from the epitome of poor information, namely Travel South Yorkshire, fbb needs to confess a stupidity and thank correspondent Julian for sorting out another of the old man's intellectual malfunctions. (they happen much more often as the years tick by!).

Why does service 1 parallel the tram service, posed a puzzled fbb in yesterday's blog. 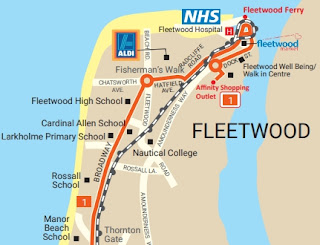 Answer : Because of the stupidity of the old fogey's concession scheme and the general silliness of all who operate it.

This, you may recognise, is not a bus. 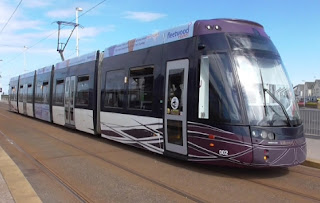 Therefore the OAP free passes are not generally valid valid for travel by this non-bus running on a route that stops frequently, allows passengers to get on and off, to pay their fares, and go to places - just like a bus.

Here is what Blackpool offers graciously:-

People who hold valid English National Concessionary Travel Scheme passes can travel for free on Blackpool Transport buses between 0930 and 2300 hours Monday to Friday and all day on Saturdays, Sundays and Bank Holidays.

Blackpool has no choice - it's the law.

With the tram, Blackpool does have a choice and chooses to extend the bus concession to tram passengers; but only to their own local residents.

You wouldn't want all those old crusties up to enjoy the illuminations from Glasgow, Manchester and far away places like Preston to get away without paying would you? No siree!

But Julian tells fbb that another operator saw a gap in the market and started the equivalent of Bus Route 1 in competition with the tram and, of course, accepting OAP passes.

Meanwhile in Sheffield (where all comers CAN use the trams!) ...

Befuddled for Batemoor (part the first).
Batemoor is a small estate of former council housing (little boxes made of tick-tacky) ... 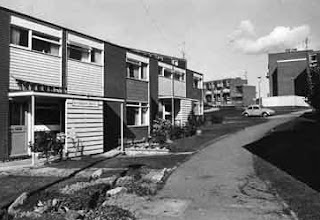 ... and built in 1964-ish. It used a gap between Meadowhead and the expanded city boundary and filling in the former Batemoor Farm land between the then A61 to Chesterfield and the B6057 Dyche Lane leading to Coal Aston. 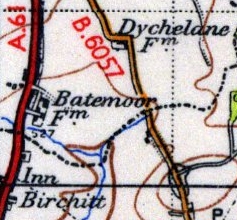 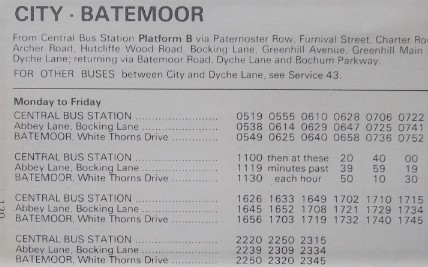 Initially running out and back via Dyche Lane ... 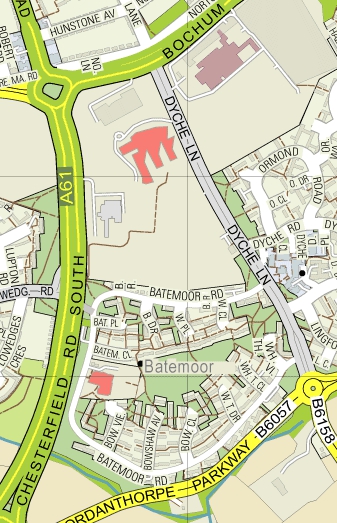 ... a little bit of bus lane was added to get buses into the estate from Chesterfield Road South (little grey bobble by the SO of "south"). 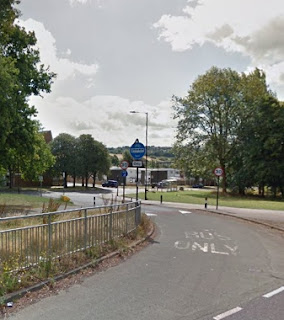 This bus priority generosity was not particularly altruistic for the Council as it was necessary to allow the removal of the right hand turn off Bochum Parkway into Dyche Lane (to the right of Aldi). 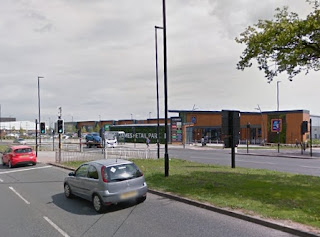 This project has given bus planners unresolvable nightmares ever since - as we shall see.

With the opening of the Meadowhell Shopping paradise, the Batemoor route was linked (inexplicably) with a new express service between City and the mall, numbered 501 and using branded bendy buses. 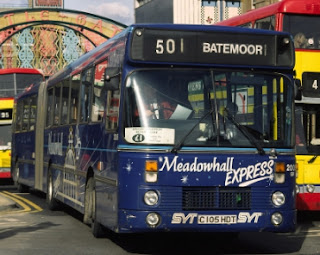 The route does not exist today with Meadowhell being on the frequent X78 and X1/X10 and Batemoor served by ....

... and that is another story.

Not long after Batemoor came the Jordanthorpe Estate on the opposite side of Dyche Lane. 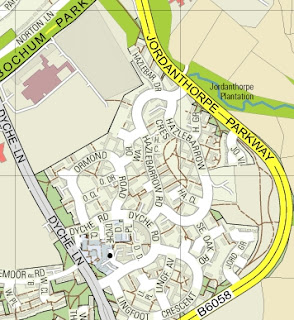 Names were filched from the Hamlet of Jordanthorpe and Hazelbarrow Farm, neither of which was within the boundary of the new estate.

It was served by an extension of the Hemsworth via Gleadless Valley route 43. 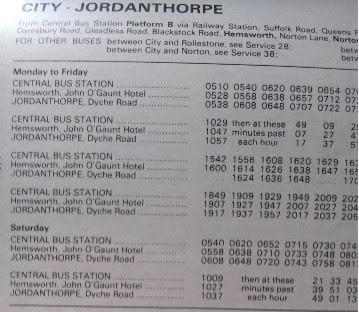 The biggest interest in the route 43 was that a youthful fbb and a certain Mr Giles Fearnley (even more youthful!) travelled on the first ever bus and dispensed coffee to themselves and the driver at the turning circle terminus ... 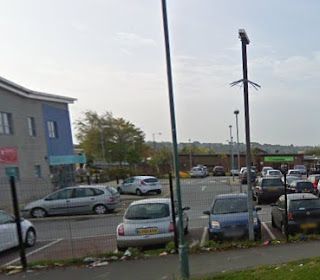 ... now within sight of a co-op and the medical centre. Post deregulation competition saw Stagecoach (ex Yorkshire Terrier) arrive on their service 79. 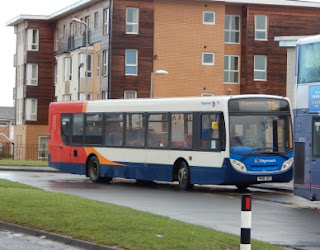 In the Sheffield Bus Partnership carve-up Stagecooach got the Jordanthorpe route as its service 1 ... 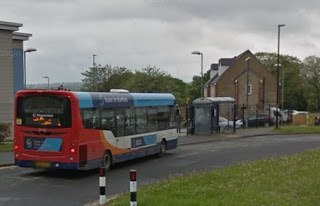 ... which neatly prepares us for tomorrow's blog.

Next Befuddled for Batemoor blog : Friday 11th October
Posted by fatbusbloke at 02:00