Readers will remember fbb's apoplexy (shared by many Sheffielders and the local paper) at the first edition of the "Underground" style map of "frequent services" that appeared as part of the Buses for Sheffield (BfS) attempt to "sell" the complete network. All credibility for such a scheme was lost when the first attempt (Sheffield Bus Partnership) reduced services and laid an unbelievable claim that this was an improvement.

The laughable map is posted on numerous bus shelters in the centre of the city. 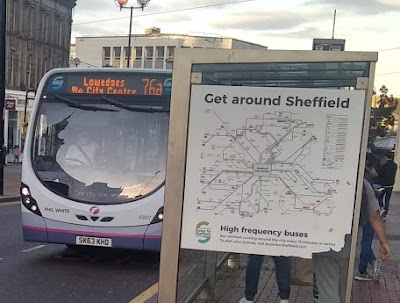 The map has recently been revised and fbb must say, at the outset, that some of the really excruciating mistakes have been corrected - but many of the small bludners remain.

The biggest lie is in the heading.

By no stretch of anybody's imagination is every 15 minutes "high" frequency! In a busy city, every ten minutes is less than ideal.

But the problem with this header is that the map has huge areas where buses run at a miserable half hour headway. When, for example, the 97 and 98 come together on the Abbeydale Road they do run every 15, but to Totley and to Totley Brook every 30 is the best you can get. Likewise the 81 to Dore is every 20, the 82 to Millhouses is every 20 and they come together between Ecclesall, Sheffield Centre and Hillborough to make a reasonable ten minute service.

About 40% of this map shows services which run LESS frequently than every 15 minutes!

fbb is not a lover of "Underground style" maps for bus services. A diagram is OK for the "Tube" in London where geographical accuracy is less important than route planning. And almost all of the Underground runs every ten minutes or better; and the better is a great deal better!

To review the map is difficult because it is too big for a blog but, arrogantly, fbb will offer some comparisons with his own attempt. A further constraint is that the BfS version is not published on-line, so fbb has had to rely on a photograph from a correspondent (thanks again, Roy). Slightly enlarged versions of the whole map cane be seen by clicking thereupon. 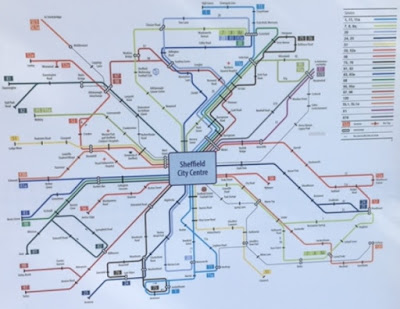 And here is fbb's version. 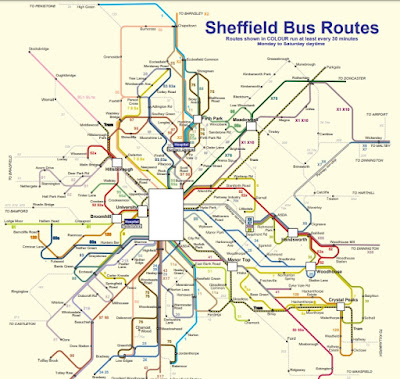 Please note that for fbb's possible use in these blogs etc. it includes a faint reference to ALL services running from Sheffield Centre; but the coloured lines are more inclusive than BfS offering.

Frequency of every 30 minutes; that way, the fbb map tells no lies. It is almost impossible to create a useful map showing only buses more frequent than every 30 - so much has to be left out.

He will make a few detailed comparisons. 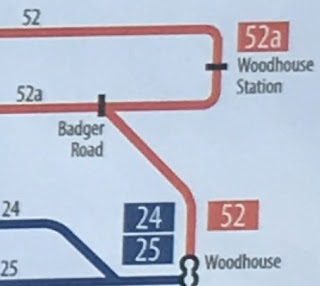 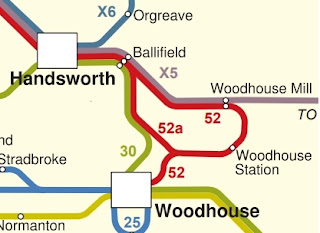 X4, X5 and 30 are added plus a good bucket of geographical realism. 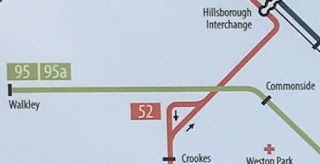 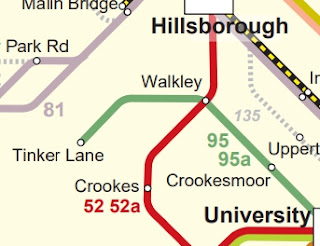 Walkley goes where it belongs, namely at Walkley, making it clear that routes 52 and 95 both serve that locality. Tinker Lane is very much on the edge of town! Incidentally, for the collectors of unusual-ness, this is the only terminus reverse in the city.

The idea that all these services terminate at Ecclesfield shows a farcical lack of knowledge on the part of the BoS map compilers.

In fact, fbb has not been as truthful as perhaps he should, but the situation is complex and very difficult to show simply. But at least your noble blogger and amateur cartographer is conveying the essence of the stops in the Ecclesfield area. 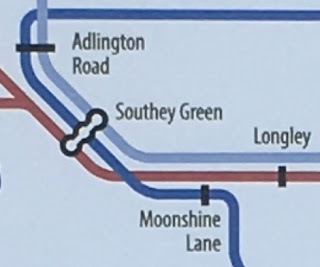 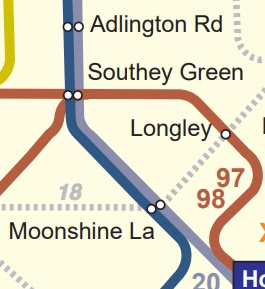 Almost NOTHING is right with the BoS map. As well as being a gigantic misrepresentation of truth, the information conveyed is just plain wrong.

Highfield and Heeley:
Because it is hard to describe in words, fbb has added route numbers to this BfS extract. 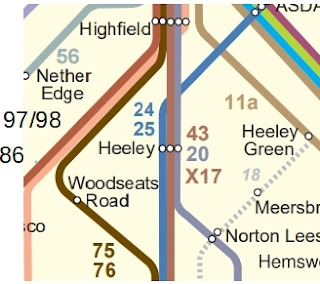 fbb's colours are different, based originally (and loosely) on one of the geographically accurate network maps. But the following will indicate how wrong BfS representation is. Please note that the fbb version has added 86 (Lowedges, every 30 minutes), and 43/X17 (Chesterfield, five buses an hour). 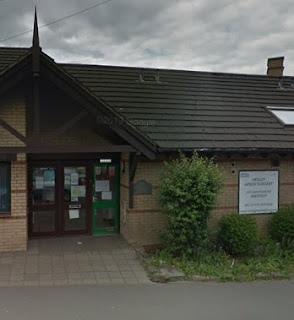 Before anyone writes a comment, your frustrated author is aware that the post office just below the Heeley GREEN surgery (illustrated above) is officially called Heeley Post Office ... 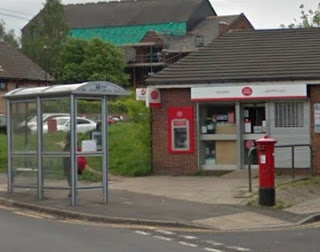 ... but the road signs make it unequivocally clear where you, and the buses, are! 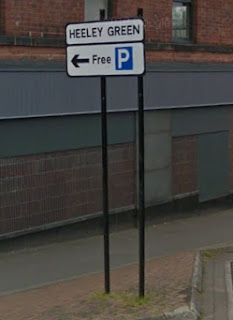 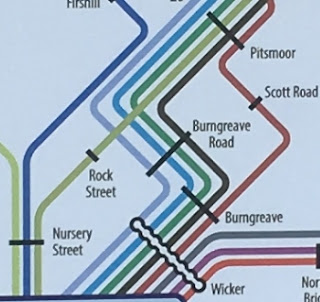 The "Underground" map is a right underwhelming mess of under performing cartographic non-skills and readers may amuse themselves by working out the difference between a correct map and a daft one. 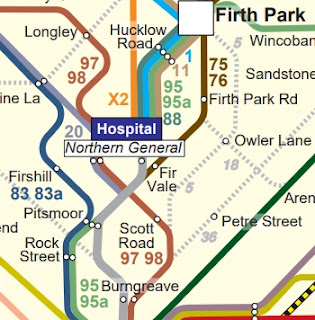 Leaving aside those routes leaving both maps lower right and zooming off to Attercliffe and Brightside, EVERYTHING runs via Pitsmoor!

Highlight frequent services : IT DOESN'T because many of them aren't.

Make interchange easier : IT DOESN'T because often it isn't.

Encourage passengers to make journeys by bus : IT DOESN'T!

fbb's version was created on ancient cheap software in a loft in Seaton Devon, taking a total of 20 working hours to complete and two hours to update for September 2019. The BfS map was created with all the resources of a massively funded quango. The difference, yet again, is that fbb made extensive use of a HUMAN BRAIN which knows where the buses run.

The correct and useful map is, once again, on offer to the Buses for Sheffield "partners" (don't laugh!) entirely free of charge (T & C apply).

A link to this blog will be sent to the bosses of First and Stagecoach plus the PTE and Sheffield's local press.

fbb expects to be ignored - again! But he would really, really, like to see the job done properly.

On A Lighter Note!
A sweet picture via twitter. 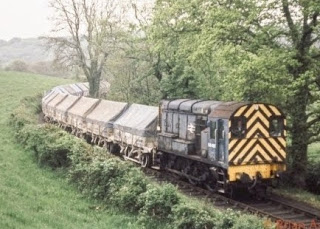 Wenford Bridge was the terminus of a former railway line from Wadebridge that was originally built by the Bodmin and Wadebridge Railway in 1834. The line was built in order to facilitate the transport of sea sand for agricultural use from the estuary of the Camel to the local farms, and never carried passengers. Other traffic included granite and china clay from local quarries, and the line survived to carry the latter until 1983. Today the route of the line forms part of the Camel Trail, a recreational route for walkers, cyclists and horse riders. 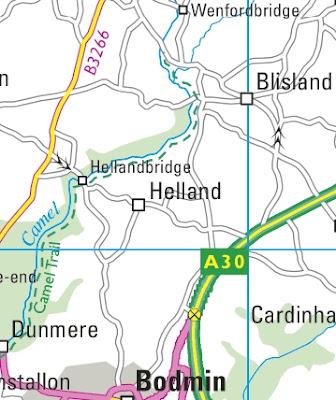 Of course trains used to be hauled by little steam locomotives. 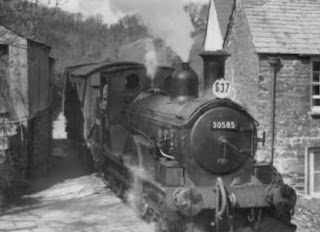 The above picture was taken at Helland Bridge, part way along the line. 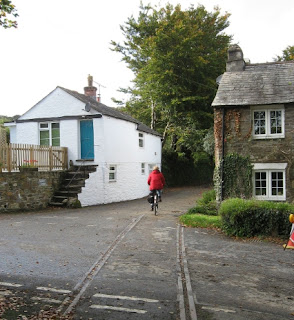 Next USA blog : Tuesday 22nd October
Posted by fatbusbloke at 02:00