Delightful Didcot in a Downpour (3) 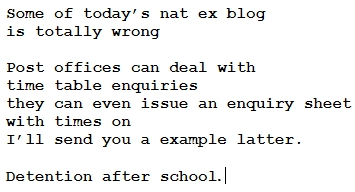 The offending blog was published early yesterday as usual and elicited an immediate riposte from Roy!

Whilst serving his fully deserved detention, fbb took a look at the NatEx web site to see if his local Post Office (just a short teeter along the road from fbb mansions) offered this service. 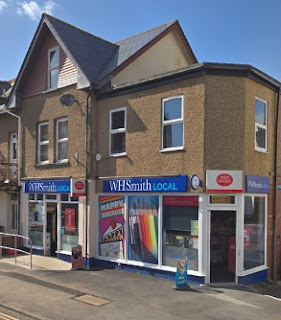 The results of this research will be included in a future blog.

Back to Didcot
Before the Great Western electrification, there were fast trains from London to Oxford (by-passing Didcot) and local stopping through trains serving intermediate stops. Then came the huge overspend on over-specified over-engineered overhead and running wires to Oxford was delayed, postponed indefinitely or/and abandoned.

With super-smashing bi-mode trains you could run on electric as far as Didcot then change to diesel power for the last bit to Oxford. Much fine gold saved and the Men from the Ministry (DAfT) continue gleefully in their quest to micro-manage the privatised but very much nationalised national rail network.

GWR don't have any bi-mode "local" stock so a change of train at Didcot is now obligatory for all local journeys. Great! 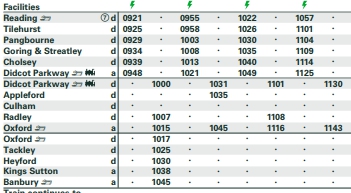 The green symbol at the head of the stoppers from Reading to Guildford looked like a letter "f" to fbb, but is in fact one of these:-

Crowds travelling from, for example, Pangbourne to Oxford and beyond have between 5 and 12 minutes to enjoy the stroll from electric on platform 4 to diesel on platform 5 at Didcot; thus making their journey somewhat less attractive.

Anyway the fbb party was able to see the Electrostars ... 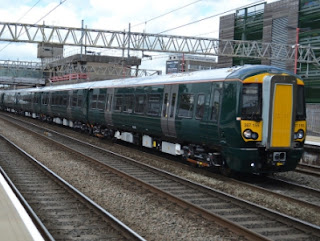 ... arriving and departing electrically. Photographs were impeded by over enlargement and overhead, but you will get the idea! 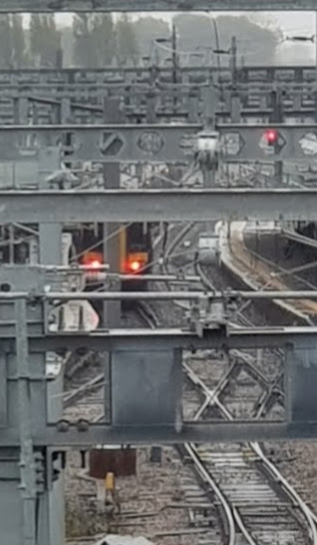 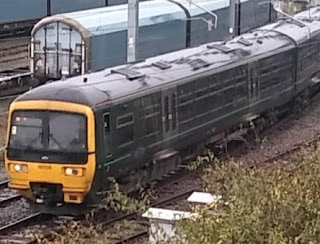 This one was the two hourly Banbury train.

There Is another challenge with these "local" trains. From Oxford the timetable leaflet only shows trains as far as Reading. But they run to and from Paddington. 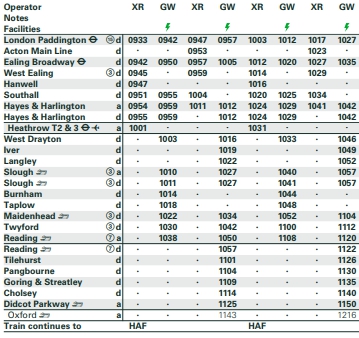 The half hourly trains to Reading only are due to be handed over to Transport for London aka Crossrail aka Elizabeth Line.

But think of it, dear readers, with just one change, you could ride all the way from Ealing Broadway (London) to Kings Sutton (Northamptonshire) taking just over two hours.

But the Three fbb Stooges had come to a drizzly Dicot to see bi-modes whizzing past. Sadly many of the speedy slugs actually stop at Didcot. 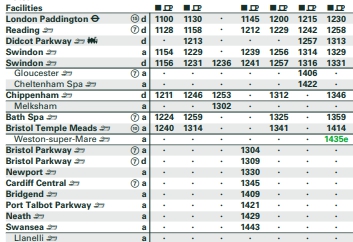 Nevertheless the service and the trains seem good and will be much improved from the December timetable change. fbb is already planning a second visit to the (unadvertised) Didcot viewing gallery. 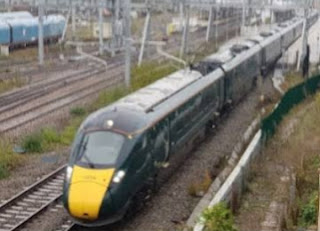 ... and a non-stop approaching platform 2 (although you can't tell its speed from the picture, of course.) 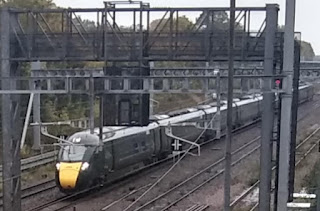 Mention should be made of the "South Cotswold Line" (1215 ex Paddington on timetable above) ...

... which becomes hourly through from Paddington from the new timetable.

No 1 son, wisely (of course), decided to video a non-stop train, but 'twas too many gigglebits for Blogger to handle ... 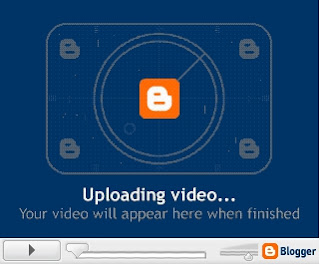 It doesn't always rain at Didcot. No 1 son also sent this snap of his 0747 commute to Paddington  yesterday morning. It stood at platform 2 whilst "something to Bristol" stood alonside at platform 1 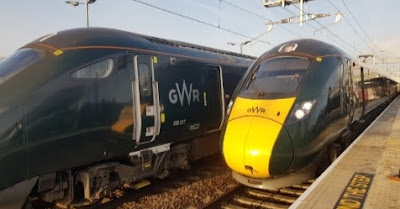 But fbb really does not like the slug colour.

Next we go to Chesterfield.

Apologies. The fbbs welcomed nephew, wife, great nephew and great niece for "tea and sticky buns". fbb spent much of the day getting the model railway up and running. The Peterville equivalent of National Rail Budleia was rife. 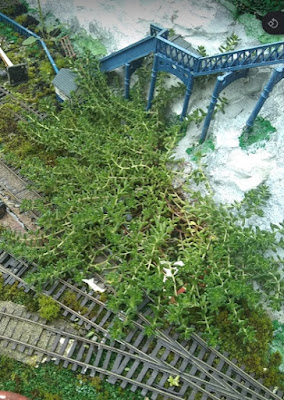 By the time they arrived it was dark and demonstrations were cancelled. fbb went out to put stuff away and was beset with a full-on attack of the Rangoon Nadgers (shivers, shakes. aches and flu type symptoms). Horrid.

He retired to his bed at 2000 to watch an old Midsomer Murders and to await recovery. He also forgot to post this blog! Rose bleary eyed at 0940!

Apologies if you consider that the blog is below standard; and apologies for late publication. Another detention?