The Sadness of Things

Leeds United are playing Sheffield Wednesday at Hillsborough Stadium on Saturday 26th. There was trouble with fan behaviour last year at a similar fixture. Sheffield Supertram suffered. So this year discussions on ow to cope were arranged. BUT ... 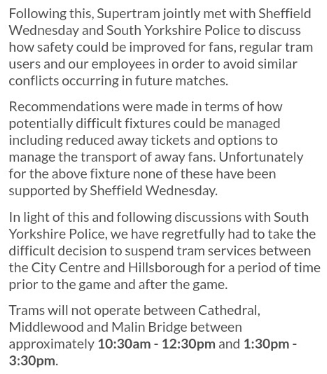 So trams will terminate the the Cathedral, depriving football non-hooligans and disinterested Sheffielders of their tram service to Hillsborough.

A on a (very) slightly positive note, Stagecoach Sheffield Supertram have published a timetable on-line and we can expect notices at all tram stops. 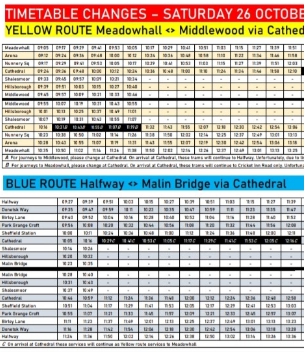 Will Supertram be sending a bill to the footy teams for compensation for loss of revenue? 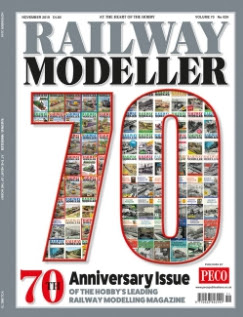 ... this time from Railway Modeller which was born in 1949 as The Railway Modeller and was published by Ian Allan. There is a souvenir booklet within the magazine which focuses on the people involved in its production over the years.

One picture is of long term editor Cyril Freezer ... 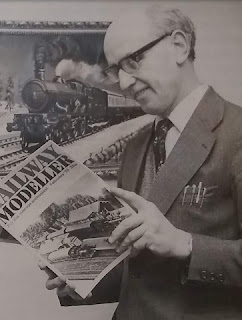 One of his contributions to Railway Modelling was a a designer of layouts. One in particular was his "signature" track plan. He called it Minories after a road near Aldgate Station in London. 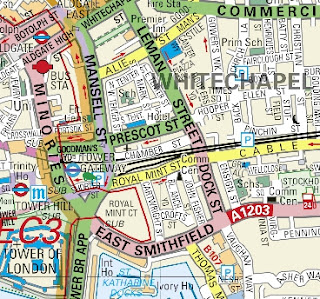 There never was such a station, but Mr Freezer's idea was that a simple plan linked to a fiddle yard would enable to modeller to run an intensive "commuter" service to this small but imaginatively busy terminus. 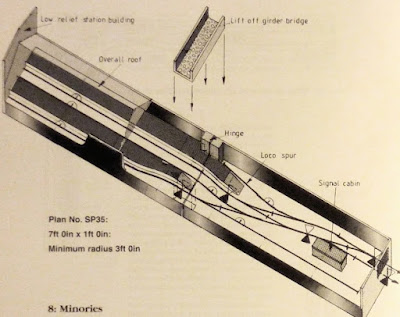 The plan first appeared in 1959 and was repeated several times over the years. Up rolls Hornby Magazine (the competitor) with its November edition and their headline layout is a modern version of Minories. 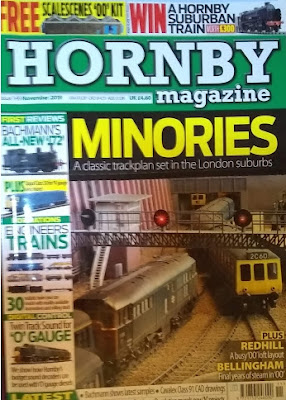 ... but of course the 1959 original would be served by steam trains whereas the more recent Minories is all diesel ... 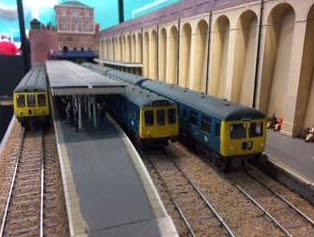 ... and, no doubt, a more recent model again would be served by electric trains!

But, whether by accident or design, Hornby gives C J Freezer and Railway Modeller a notable tribute by showing off its Minories. 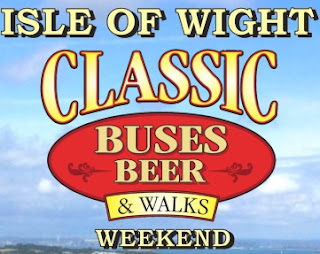 Last weekend was the Isle of Wight Bus Museum's beer and buses weekend. This has grown into a massive well attended event, and that is well attended by people and visiting buses.

fbb's senior Isle of Wight correspondent (there is no "junior" but he likes the status!) fleshes out these figures.

We were meant to have around 130 buses but with breakdowns etc probably ended up with 115ish . 93 were booked from mainland but 7 never made it!

If you think the attendee numbers are a bit "woolly" bear in mind that travel on the day is free. Visitors are invited to buy a programme, but it is not compulsory, so there is no way of being absolutely certain that everyone is counted.

The web site invites comment with the following caveat.

If you are going to comment on A/ Not enough buses, or B/ Too many people or C/ It was raining. Can I explain here that -  we cannot "magic up" more buses, we cannot tell people to go away and we certainly cannot stop it raining. If we could, we would!

But this tweeted picture caused fbb to do a "double take"! 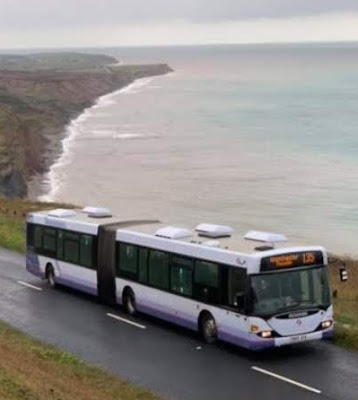 Well, fbb supposes that a bendibus is now a "classic".

What is the world coming to?

Having A Good Night's Rest - Then and Now
An interesting paste-up of a sleeper train at Fort William in the 1980s ... 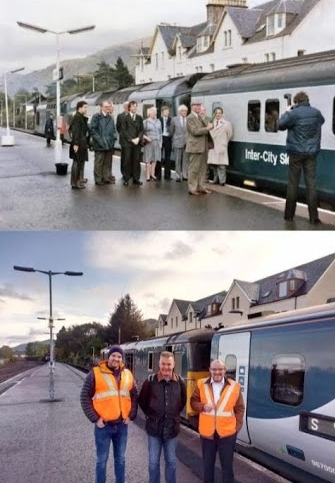 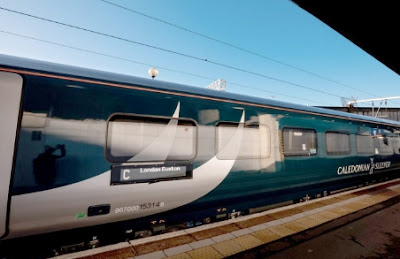 In the 1980s picture top, notice ETHEL, not the lady in the grey suit, but a former class 25 loco used to provide train heating - Elecrtic Train Heating Ex Locomotive!

Maybe Not The Best Advertising Slogan
A shout from Mrs fbb hard at work in the kitchen attempting to clean the shelves from the oven. Clutching a bottle of Cillit Bang in her hand. 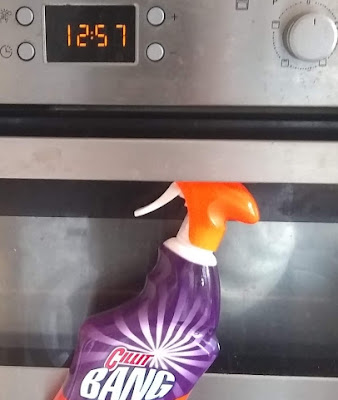 After a few minutes if aggressive toil, she shouted in frustration from the catering department, emulating Barry Scott's memorable slogan, but with a slight change.

Maybe not the best slogan for a positiver business plan!

Meanwhile fbb himself was becoming really excited by yet another stunning offer from Ebay. 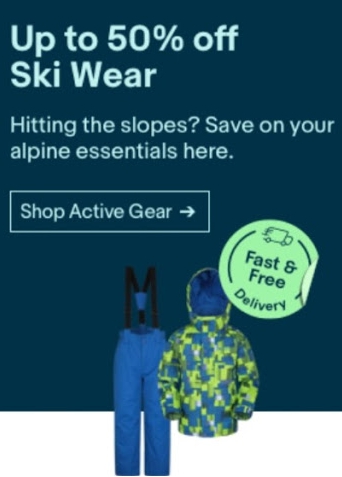 X70 Excellence - Almost
Hulley's new X70 doubles the frequency of buses between Chesterfield and Bakewell. More than that it gives a faster, direct service every hour eschewing a few rambles off piste.

(It's the excitement from the Ebay ski-pants offer inspiring fbb's choice of inappropriate vocabulary.) 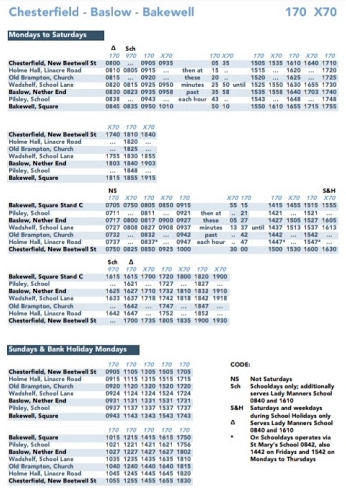 Good News (2)
The leaflets are all ready, printed and "out there" for a 4th November start.

Good News (3)
There is encouragement for new customers to try the service. 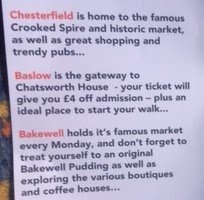 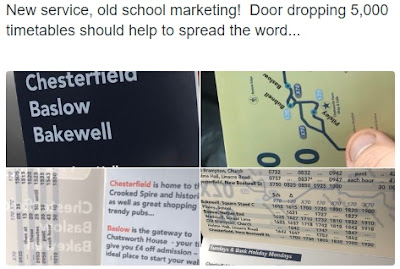 Hulleys have been distributing printed leaflets around and about; an excellent policy. Death to the "its all on line, paper not needed" philosophy!

Not So Good News (1)
The leaflets were not on display at Bakewell Tourist Information when Roy visited on Friday. When he enquired there was a distinct lack of positive response and, after some gentle persuasion the informista trudged "out the back" to search; and duly returned with the secret leaflet.

Not So Good News (2)
Toilets in Bakewell cost 20p!

Tomorrow : How to mess it up yet again!