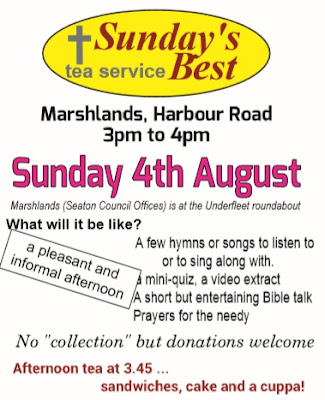 ... and packing up from Sunday's Best. Putting the bins out, doing more corrections and writing this blog.

It is a privilege top be busy (to be old and busy!) and fbb enjoys all of it (maybe not putting the bins out?) in a masochistic sort of way but things do catch up. And there are at least another 14 services of the smaller, tender winning operators, still to be done for GoTimetable PLUS preparing for the Bible Study on Monday 12th August.

Under a certain amount of encouragement from The Domestic Authorities, fbb will be creating fascinating, enjoyable and thought provoking mini-blogs from tomorrow for about a week.

Hopefully by then, sanity will have returned or, possibly, insanity will have increased and fbb will be living, Harry Potter style, in the cupboard under the stairs only venturing out for necessities!

And the old man has just agreed to recreate a PDF of an ancient Southern Vectis Rover Ticket logo for the Isle of Wight Bus Museum!

Apparently they want to paint it on a bus!

But back to more immediate matters.

Whether the Hope Valley line should have been closed is a debatable point but the provision of available information from the rail industry is, to say the least, less than helpful.

The screenshots in this blog were downloaded yesterday morning (before making the sandwiches).

Here is the map from National Rail enquiries. 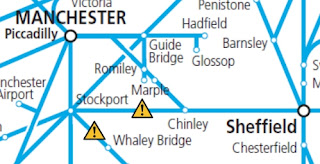 It implies that there were through trains from Manchester to Sheffield via Marple and Chinley. There weren't! Manchester to Doncaster folk were advised to travel via Leeds.

Advice for travellers was just about understandable ... 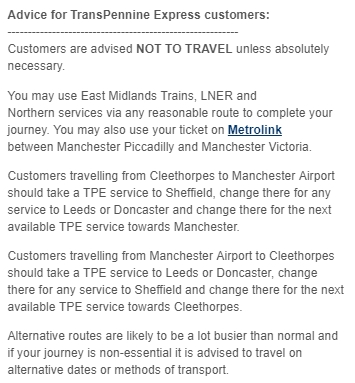 Simpler was the Manchester to Buxton line, much more at risk than the Hope Valley route as it passes through Whaley Bridge station ... 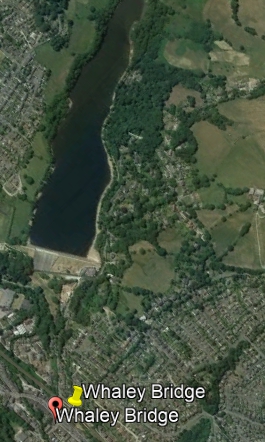 ... which lies very close to the foot of the dam. 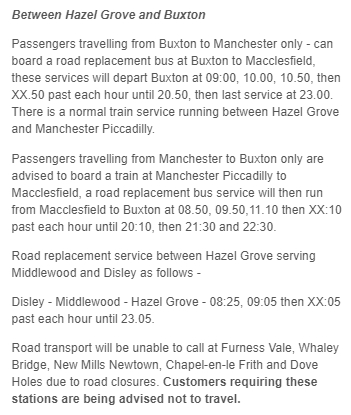 Tough cheese for any who might want the stations completely unserved as in the last paragraph.

But, of course, it is not just Transpennine that run trains across the Pennines, more specifically on the Hope Valley line. 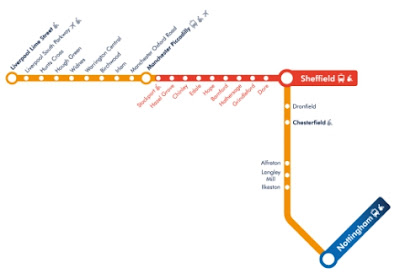 This is what East Midlands Railway were doing. Or was it?

Trains between Liverpool and Manchester? Or not?

Also along the Hope Valley trundles Northern with a local stopping service. 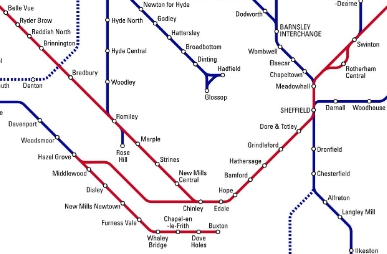 The potential danger was between Hazel Grove and Chinley but nothing was running via Marple and, apparently North of Sheffield and even ... 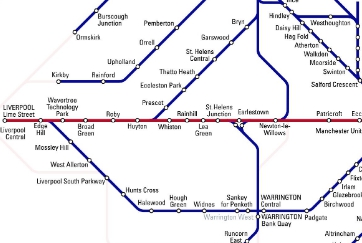 ... apparently, between Manchester and Liverpool.

Or maybe they are? 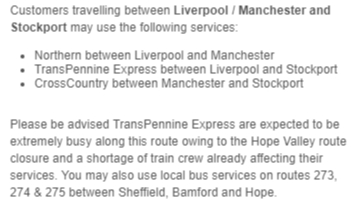 Anyway, Transpennine would be extremely busy between Liverpool and Stockport because of people trying to get to the Hope Vallety, or Sheffield, or Doncaster.

Had fbb been trying to plan a journey on these routes, rather than making sandwiches and putting the bins out, he would have been mightily confused.

Surely the Rail Delivery Group - which claims to speak for ALL the train operators - should have talked to their various members, collated the information, and published a definitive list with maps, replacement timetables and clear guidance for travel to or round the whole caboodle.

This is yet another example of our fragmented and un-coordinated rail network doing a grave disservice to the passenger.

And some rail company items stressed that the Hope Valley line has been closed on the orders of the police.

The police simply do not have that authority over the railway companies. They may advise and, if their advice is sensible, it should be taken - but ...

If SOMEBODY knows why cannot "the system" tell the passenger in a clear and co-ordinated manner.

Maybe it IS rocket science?

By the way, this is what Transpennine was saying on its web site at 0930 yesterday (Sunday!) morning.

Severe disruption on services between Manchester and Cleethorpes via Sheffield, Saturday 3 August

Due to the ongoing risk of flooding at Whaley Bridge/Toddbrook Reservoir dam, services are currently suspended between Manchester and Doncaster.

On Saturday 3 August customers are advised NOT TO TRAVEL between Manchester and Doncaster unless absolutely necessary. Alternative routes are likely to be a lot busier than normal and if your journey is non-essential it is advised to travel on alternative dates or methods of transport.

An hourly service will run between Cleethorpes and Doncaster at current advertised times, expect these services to be extremely busy.

Disruption is currently expected to last until at least Monday 5 August 2019.

Things were updated later in the day with an further addition:-

Furthermore, due to a lack of available conductors, services across all TransPennine Express routes may be subject to delay and cancellations. Please ensure you check right up until you travel.

Between 2018 and 2020 we’re going to be
delivering more than £500 million worth
of investment in new trains, new routes
and new products that will make travelling
on our network easier and more inspiring.

P.S. At 2030 fbb received a request for another potential correction to the GoTimetable data. The message read "the date on table 003a causes the table to crash - please investigate".

Table 003a should not be there - the service is withdrawn.

Next mini blog - Tuesday 6th August
Posted by fatbusbloke at 02:00