The majority of changes to Sheffield's "main line" cross city routes from 1st September are negative; with one exception being a reduction in frequency. The commercial argument is clear but ill-received (even misunderstood) by the travelling public.

It goes like this. To ensure that our services are sustainable (a k a make a profit), we need to match resources to demand (a k a reduce the services because less people are travelling). This would make sense if it were always true.

Local Sheffield opinion is that the 97 to Nether Edge has been cut from every 10 to every 15 minutes (see above for "sustainable" and "resources") because First have whopped a huge £3 fare on the route and have done so with impunity because there is no competition.

But there is always a danger that the frequency reduction (even with the lollipop of a fares cut as at Nether Edge) will discourage usage and, next time, the reduction will be from every 15 to every 20.

It would be easier to sympathise with bus operators (in this case mainly First) if there had been any attempt to generate new business. But Sheffield has lacked any positive bus publicity for five or six years. 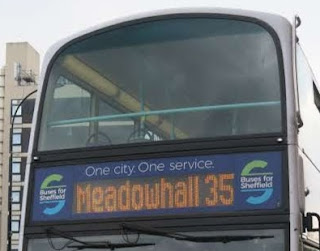 ... offered nothing new, apart from a few branded buses. The generous offer of "high frequencies" belied the fact that nothing had changed!

Buses for Sheffield have co-ordinated Sheffield’s bus services to provide a unified service that works for everyone. By working together, we can offer more frequent bus services (up to every 10 minutes in some cases) on key routes in the city, and provide more efficient services to make life a little easier for our customers.

Nothing, repeat nothing, was any different from what had been happening since the privatisation farce settled down. Well something did happen when the Sheffield Bus Partnership came in - frequencies were reduced!

Of course this is an old beef by fbb, but it does seem that the vicious circle is very much on the rampage.

Even if routes to or via the city centre survive with a modest cut, services that seek to run around the outer rims of the city can suffer much more savage reductions.

Here, for example, in RED is the route which fbb will call "via Deerlands Avenue" in 1960. 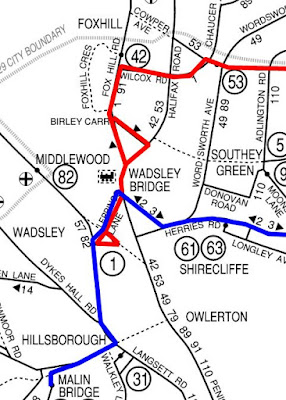 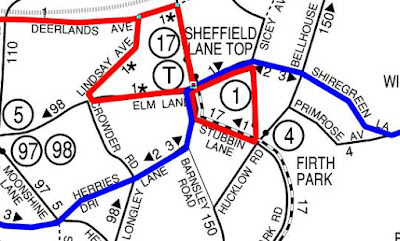 ... working its way round to another busy suburban shopping centre at Firth Park. It was unique in Sheffield Transport History in having one number for two routes (shown by the bold star on the above map). Running every half an hour the route difference was shown by a slip board in the driver's cab reading "VIA ELM LANE".

Note also the route shown in BLUE. fbb will call this "via Herries Road" and it was part of the wonderful half hourly outer circle. (Purists please note: the full circle was only every hourly but it was half hourly for ¾ of its gyration) It ran from Malin Bridge via Hillsborough but missed Firth Park.

As time went on these orbital services got "revised", renumbered and relinked. The "via Herries Road" became route 45 (DEEP BLUE) ... Notice that in this variant the 17 takes an enjoyable tour of the Parson Cross estates to ensure that people's journeys are slightly more tedious. But, take heart, both the 17 and the 45 still ran every 30 minutes.

Roll on to the present day. "via Herries Road" is 38 and 38a (BLUE GREEN), similar to previously with a few extra wiggles but with a combined headway still at every 30. (click on the map to enlarge it). 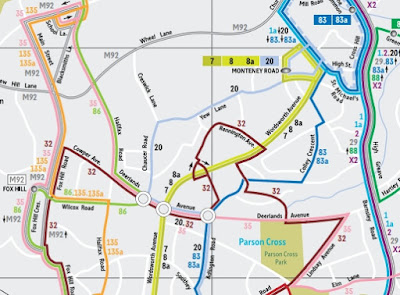 It now has a lengthy detour via Grenoside (upper left on the map above) thus adding to its tedium as well as reducing its frequency. But with route 135 it does give Grenoside village two buses an hour.

While you are looking at the above map please note route 32 (DARK BROWN) which we will meet again in a moment.

Its history is too complex for this brief (?) blog but its route map explains everything - or, more likely doesn't! 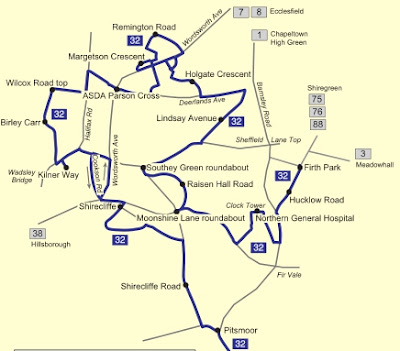 It continues via Pitsmoor into the city centre and runs, amazingly, every hour.

So here is First's sustainable resource-effective plan from 1st September, having won the tender to operate route 32. 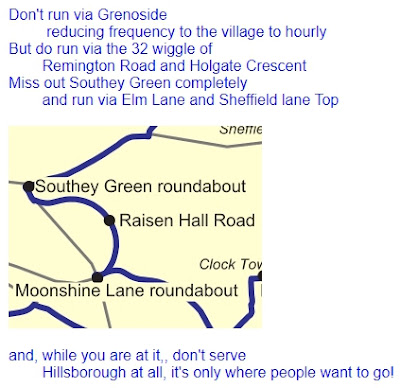 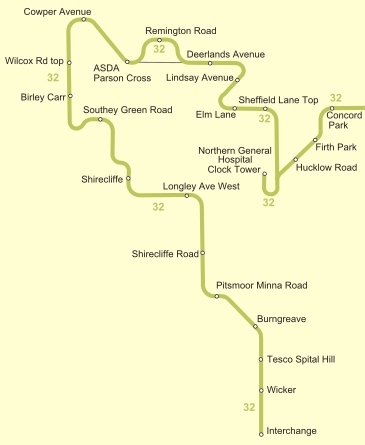 Profuse apologies for the different styles of map, but fbb had to use what was available to him - too much like hard work to redraw them all.

So the "traditional" route via Deerlands Avenue from Hillsborough is, effectively destroyed - but the new route, we must assume, is sustainable and matches rescourced to demand!

Anyway, folk from Hillsborough to Firth Park can, at least catch the half hourly 38/38a.

True, they can but, from `1ast September, with a reduced service from every 30 minutes to hourly. 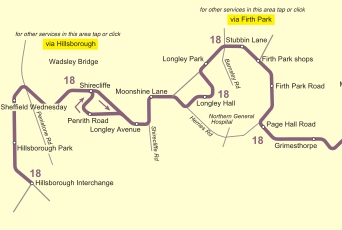 fbb has not the slightest doubt that First has done its sums, and by company standards they needed to do something (sustainable, resources etc. etc) but where does it all stop?

THERE MUST BE A BETTER WAY

For our few remaining readers who have NOT lost the will to live - something completely different tomorrow.

Blue or red, there's more to be said!


Next railway blog : Friday 16th August
Posted by fatbusbloke at 02:00