Have you heard of this man? 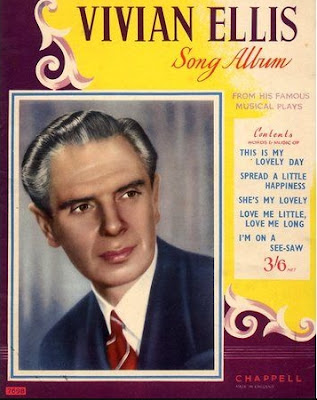 A composer and song writer whose most famous ditty was probably "Spread A Little Happiness" as featured on the sheet music album above. Then there is this group, snapped in 1937! 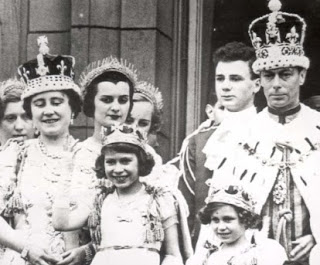 Then there is this author ... 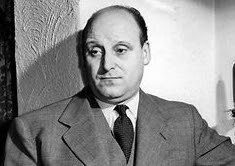 ... whose most endearing character was played, for many years on radio and TV, by this actor. 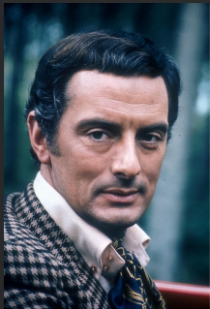 Top is Francis Durbridge; below is Francis Matthews. And there's this tune, and these pictures, which link them all together ...
... with a recent but failed purchase for the model railway.

The theme tune to the Paul Temple amateur detective series on the good old steam radio was "Coronation Scot" written by Vivian Ellis!

Paul Temple is a fictional character, created by English writer Francis Durbridge (1912–1998). Temple is a professional author of crime fiction and an amateur private detective. Together with his journalist wife Louise, affectionately known as Steve from her pen name 'Steve Trent', he solves whodunnit crimes through subtle, humorously articulated deduction. Always the gentleman, the strongest oath he ever utters is "by Timothy".

Be that as it may, readers may remember fbb's unbridled excitement when chum Richard sent him a tatty old Hornby Dublo tank wagon. 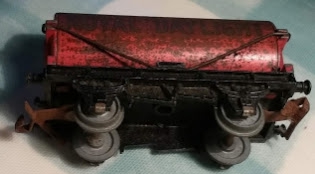 As you author was browsing through the second hand lists from Hattons of Widnes ...

... he spotted the near identical wagon like this one below, but in the same red as the tired old tat above.

It was catalogued as Triang although almost certainly Wrenn, but more importantly it was advertised at a Triang price (£6) not the OUCH amount being asked for Wrenn products.

fbb thought it would be a nice treat for chum Richard (who is visiting soon) to see an equivalent of his elderly gift but in good nick. As a bonus it would run happily on fbb's layout whereas the original Hornby Dublo, with metal wheels, would cause a power-stopping short circuit. Hattons postage charges are punitive (at a flat rate of £4) for small orders so fbb sought another model to bulk up the package a bit. 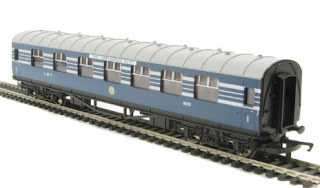 ... which, with a little added research, might make and interesting read for the fbb audience.

Then Hattons rang to say that the tank wagon had been bought by another purchaser 30 seconds before fbb pressed the "Enter" key. So the old man ended up paying over the odds for coach-plus-postage, so you had better enjoy the blog! 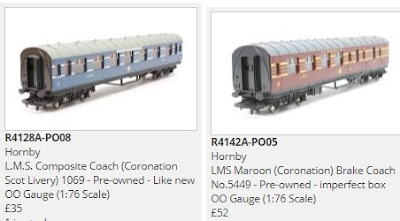 ... with a whopping premium for the maroon and gold versions, but the model is not new having been in and out of the range since the early 1990s. fbb's must be an old model ... 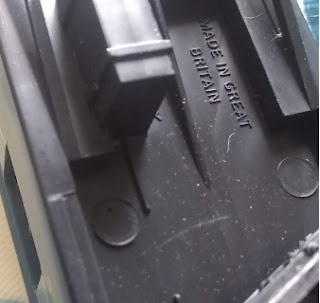 The Coronation Scot express train started in 1937 and five locos and three sets of coaches were painted in a special blue and white livery, hence the model. 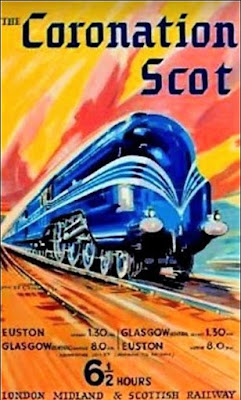 It ran until the start of the war in 1939 when train speeds were reduced and expresses effectively ceased to exist. It ran London Euston and Glasgow Central, stopping at Carlisle for crew change and to pick up and set down passengers to and from London only. The service was designed to compete with the rival services on the East Coast Main Line, for prestigious London to Scotland traffic.

Present-day Virgin Pendolino trains from Euston to Glasgow Central take four hours and twenty nine minutes! But they are nowhere near as luxurious! 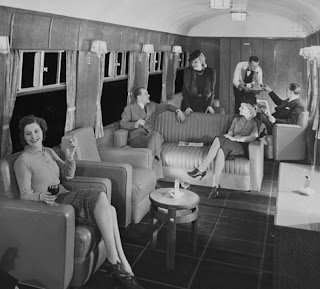 And the grub is nowhere near as good. 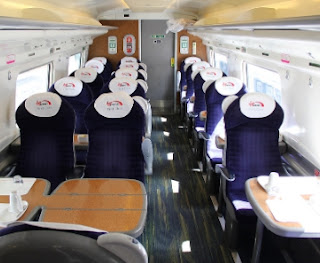 But it 1937 it was all about style, not just about cramming in as many passengers as possible. It was also about competition with the LNER! 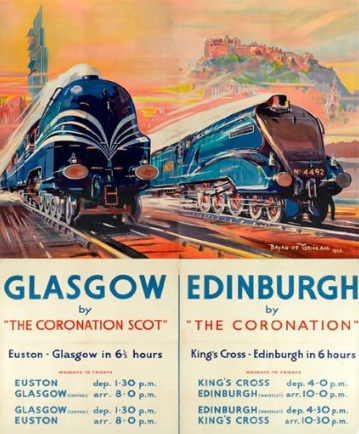 The Edinburgh trains were faster, so LMS had to out-style the east Coast route and, with their blue,"streamlined" trains, they did just that. 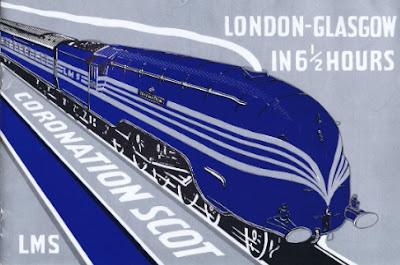 There is also a stylish book about it, available from the usual on-line sources ... 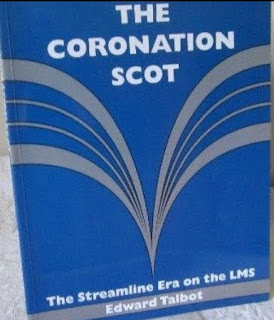 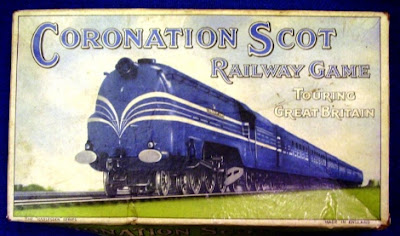 What better evening entertainment could be had in the late thirties; playing a board game, listening to a Paul Temple episode on the wireless and rounding it off by putting Vivian Ellis' record on the gramophone ... 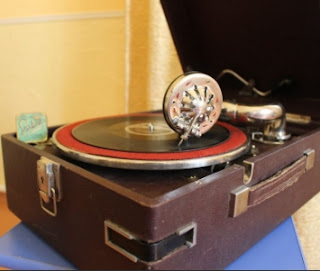 ... all the time dreaming of your next 6½ hours of indulgence!

So what's with the red and gold livery?

P.S. For Modellers
Hornby are currently advertising a pack of three Coronation (blue) coaches in their Railroad range. 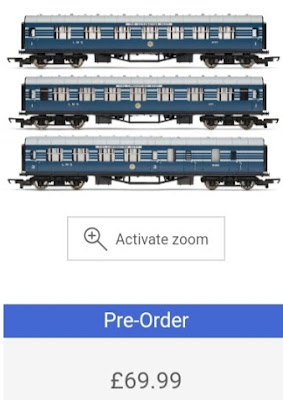 .That's £23.33 each and cheaper than some second-hand offers! Crazy!

Peco advertise a Royal Daylight tank wagon kit from an old range. It's a bit pricey, but fbb might be popping over to Beer to investigate. 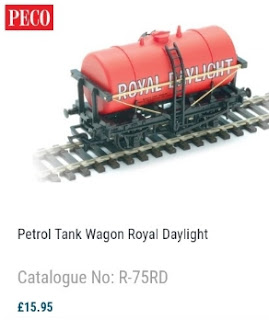 Next "Coronation" blog ; Saturday 17th August
Posted by fatbusbloke at 02:00