STOP PRESS
Announced earlier today : First Group (with partners Trenitalia) has been awarded the franchise to run the "West Coast"  rail network continuing on to incorporate the start of High Speed 2. Trenitalia is, of course, Italian State Railways.

How Gleadless Was My Valley?

In 1955, Sheffield City Council began a major housing project on the slopes of the steep  Gleadless Valley ... 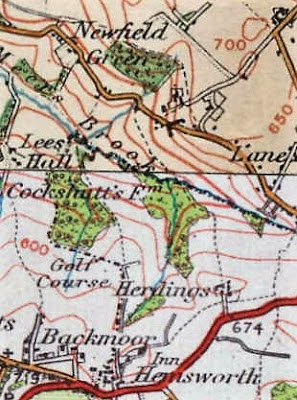 ... which lay between the (BROWN) Gleadless Road and the (RED) Outer Ring Road. By 1962 work was completed and, thanks to the hilly and wooded nature of the site, three spectacular communities emerged. 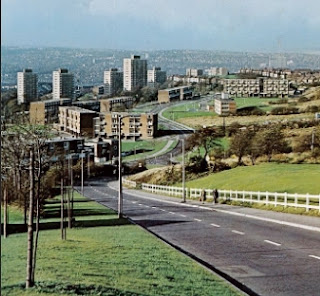 They were names Hemsworth, Herdings and Rollestone after formed farming settlements.  Rollestone developed around the Meers Brook upper centre in the old map above. 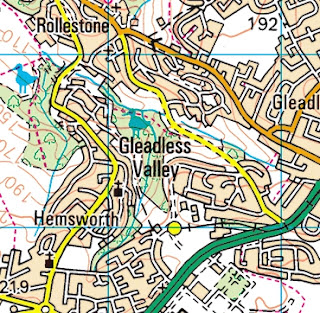 In the modern map, Herdings now has a blob  (YELLOW) showing its tram terminus. Historically, diversions of pre-existing bus routes served Hemsowrth, arriving from the south (33) and Herdings to a turning circle just off the Ring Road (now GREEN)as part of route 101.

But the "Valley" itself acquired its very own direct bus services, name;ly route 43 to Hemsworth and route 28 to Herdings. The 28 remained un-tainted by competition, but the 43 (by then extended further south to Jordanthorpe) attracted the commercial eyes of Stagecoach. Neither was ever a tram route! 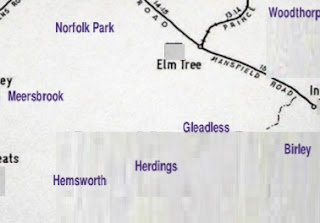 For much of their recent life the 28 amd 43 became the 47 and 48 and were linked cross city to the Shiregreen services, likewise never served by tram.

Then along comes the Sheffield Bus Partnership and the competitive services to Hemsworth became joint. 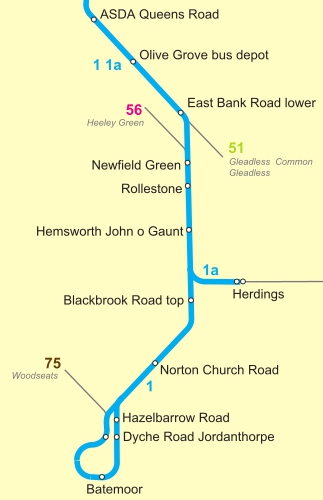 Stagecoach snaffled the full length of route 1 while First copped shorter journeys to Herdings VIA Hemsworth. The original Herdings became the 56, links, as well all remember from yesterdays blog, with the route to Wybourn. The 56 follows a different route into the city. 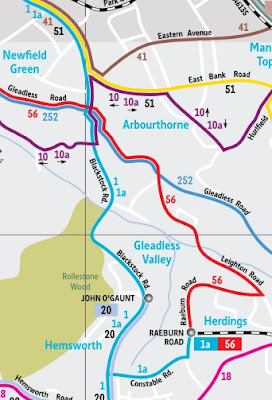 The 1 and 1a currently run every 12 minutes each, giving a six minute frequency from Hemsworth into city and on to Chapeltown. The PTE timetable non-leaflet for the 1/1a is badly designed and confusing, so this extract is from fbb's input for GoTimetable.

Originally all buses (1 and 1a) ran through to High Green but First decided to turn short at Chapeltown to cut costs. Also note that the services follow different routes through Ecclesfield. 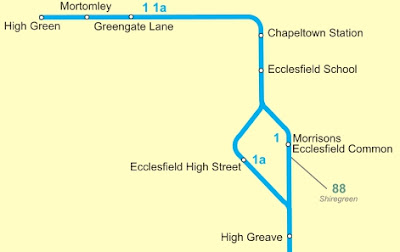 From 1st September this will all change. The "Partnership" joint operation is dead, First have withdrawn from this particular set-up.

The new 11 is reduced to every 15 minutes so the joint service between Hemswirth and City and on to Chapeltown is not only dis-jointed, but is unmatched in frequency.

Every 12 and every 15 simply don't fit together.

But there's more. Former service 56 becomes 11a and is also reduced from ever 12 to every 15 minutes. 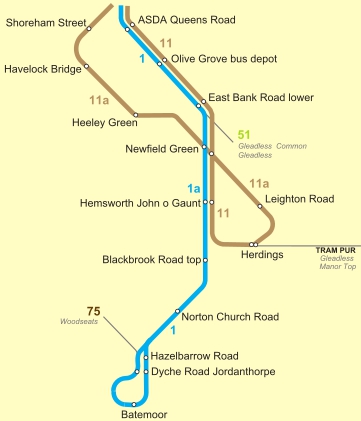 First bus explains that 11a buses become 11 at Herdings (and vice versa) allowing passengers to travel round the loop; but their information doesn't show any times for journeys "through" Herdings so the "offer" is not really promoted.

But First also tell us that, on the north side of the city, the 11a will run to Northern General Hospital "giving a bus every 7½ minutes" - 11 and 11a combined - to Pitsmoor and Fir Vale. 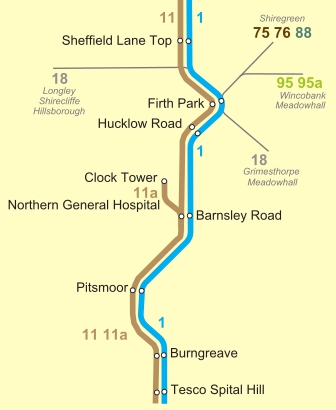 This extract from GoTimetable Sheffield shows how it works. 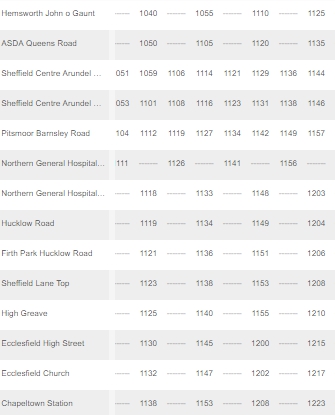 Fair enough, you may say. But, on Saturdays, the 11a only runs every 30 minutes to The Clock Tower and not at all on Sundays. On Saturday, then, the combined services becomes a bit of a mess, lacking proper co-ordination.

And there is another problem at Northern General Hospital.

Buses on route 11 to Chapeltown stop on Barnsley Road just past the Hospital entrance. 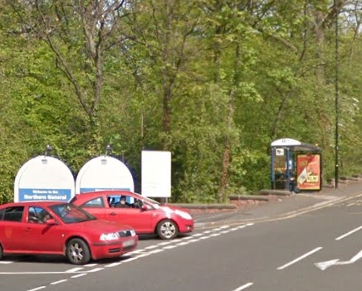 But buses on route 11a to the Clock Tower turn left BEFORE the stop.

Will passengers who just want Barnsley Road be able to get off, or will they be carried protesting to the Clock Tower?

Travelling TO city the main road stop is AFTER the hospital exit, so no problem. 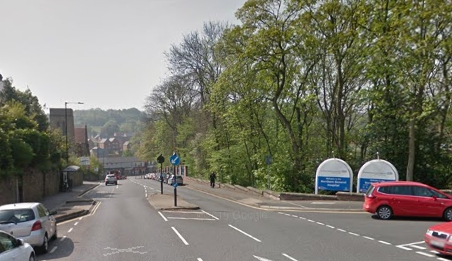 Have First though this through? 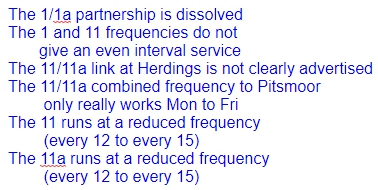 Will there be a good leaflet with good maps to explain all this?

Will the leaflets be available before the service changes happen?

Is this really, really, the best way to encourage bus usage?

And finally. Tomorrow we look at what the PTE and its tendered services have done and, surprise, surprise, IT IS ALL BAD NEWS.


Next "carnage" blog : Thursday 14th August
Posted by fatbusbloke at 02:00