Time For A Re-Think?

!986, the year of the deregulation of the UK bus industry with freedom for any Tom, Dick or Brian to start a bus company and to compete against the incumbent operator. Huge benefits for the passenger with better services, reduced fares and staff committed to serving the passenger well. Local bus companies could start up and provide services from the smaller villages in to the towns. It looked really lovely. 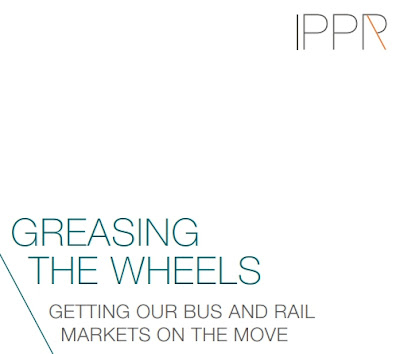 Millions of bus passengers who rely on services outside London have been let down by a lack of competition and the failure of deregulation, a report warns. They include the poorest fifth of all households, who cannot afford cars and yet who end up taking more taxi journeys each year than any other income group because of the unreliability and high fares of their local buses.

The report from the IPPR thinktank, Greasing the Wheels: Supporting and Improving Britain's Rail and Bus Services, calls for local transport authorities modelled on Transport for London to be introduced across the country, with powers to introduce more successful London-style bus regulation.

The report argues that liberalisation has not resulted in a competitive market: 37% of weekly services outside the capital do not face any effective head-to head-competition and just 1% of weekly services face effective competition over all or most of their routes. Bus fares outside London rose by 35% above inflation between 1995 and 2013, and by 34% in Wales and 20% in Scotland.

Over the past 30 years, bus passenger journeys outside London have decline by 32.5%.

You would expect, however, that, as a bare minimum, the Government and its agencies would be in the serious business of helping the public travel by bus.

That is why, according to some sources, 3000 bus services have ceased since deregulation.

FOUR examples of how our government helps the public. 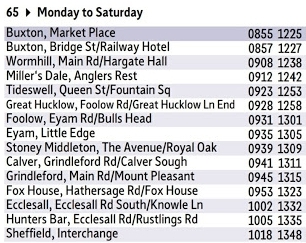 High Peak registered just two of its former five return journeys between Buxton and Sheffield. Derbyshire re-tendered and Stagecoach won the tender for the cancelled journeys and decided to run the commercial journeys as well. The "we help the public" officials would not allow High Peak to stop operating the now duplicated journeys - thus putting the finances of both companies at risk.

Split Registrations
Whenever fbb writes about this it produces significant amounts of feedback. A blog reader sent fbb a reply he received from the horse's mouth (from "The Department") which repeats what some bus companies repeat on their publicity.

Point (iii) is the nonsense. 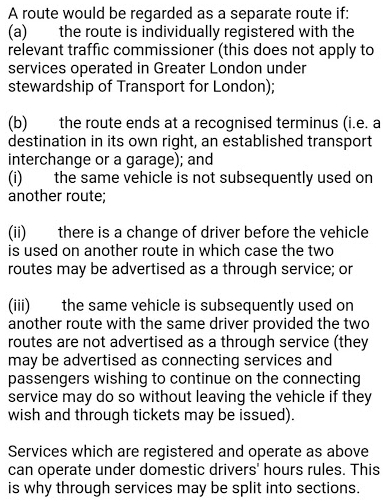 Should government be asking a bus operator to tell lies?

Should a government be deliberately misleading the public?

Why not just say "no" to the EU? Must other countries do so with impunity when the regulations don't suit them. Of course we will be saying a grand "No" next April!

And all brought about by an "opinion" and "advice".

Monitoring Madness
This story was added to a comment on Monday's blog - but is worth repeating because it is so DaFT.

At my depot it was standard practise for drivers to change the blinds for the next journey as they unloaded the majority of passengers at the city centre stop. This meant that they ran quarter of a mile to the bus station (passing no other stops on the way) with the wrong destination.

Very sensible - ensuring that as the bus pulled on to the stand, it was showing the correct destination rather than something like "City" or "Town Centre".

Mr DaFT inspector/monitor came along and stood twixt stop and bus station. He recorded a large number of journeys which failed to operate (the terminating ones) and a matching number of unregistered journeys on other routes passing him (the next departures).

Remember, there were no stops between the two points so no-one except the official official could possibly care!

My Managing Director got called in to explain these irregularities to the Traffic Commissioner. The local staff were tasked with providing an answer for the MD, and all of us recognised the working patterns and knew instantly what was happening.

No passenger was affected in the slightest BUT ...

A Notice to Staff was issued with immediate effect ending the practice.

Government agencies making it harder to the passenger to cope with public transport; surely the official official should have been told not to be so stupid!

Keep The Service Running - No Chance. 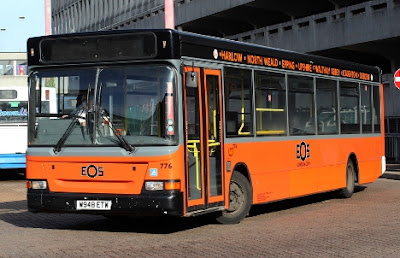 EOS buses (bsed at North Weald, Essex) ceased trading formally in 31st July. Their web site was clear about this ... 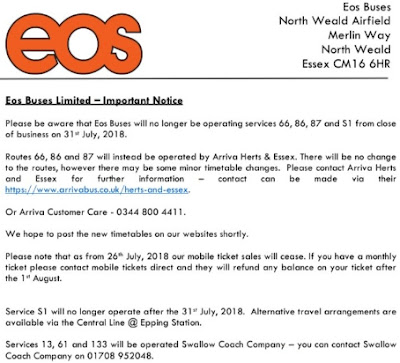 In summary, EOS had arranged for Arriva to take over its main services (66, 86 and 87) from yesterday, 1st August. 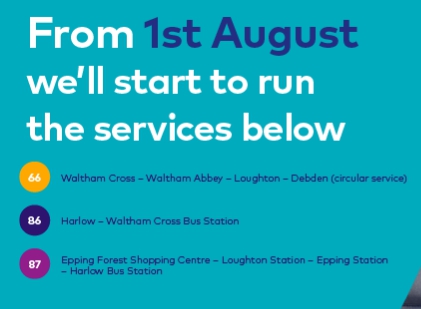 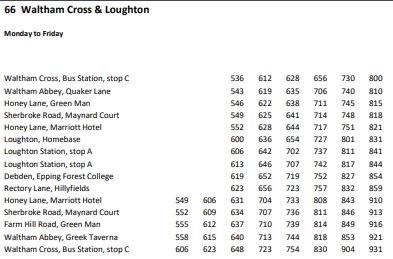 ... as EOS with no interruption to the service. 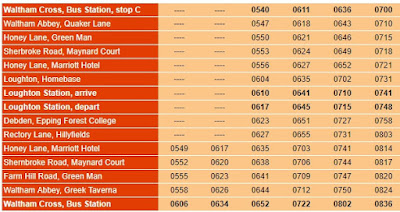 A sad time for EOS, but no inconvenience to the public whatsoever. Well done all concerned!

But this then appeared on "Social Media". 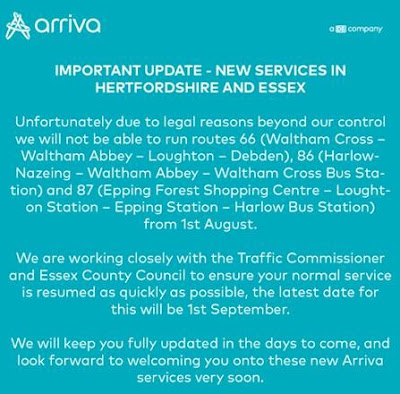 Whatever went wrong, it is simply unacceptable that the public should suffer a totally unnecessary bus-less month just because some tick-box wasn't ticked with the right coloured pencil or the slope of the tick was at the wrong angle.

Correspondent David, who informed fbb of this crass stupidity, wrote:-

If it means maintaining a service, bureaucracy should be thrown out the window. It's very easy to lose passengers but very hard to get them back again. If this is at the insistence of the Traffic Commissioner, it is a disgrace. If Arriva want to run the services let them and then sort out the paperwork later. SERVING THE PUBLIC IS OUR FIRST PRIORITY NOT FILLING OUT THE CORRECT FORMS IN THE CORRECT SEQUENCE.

And so say all of us - but apparently the faceless, unaccountable, "authoriuities" don't.

Surely, it is time for a re-think.