And, Talking Of Trams

Innsbruck has trams, now moderinsed with three town routes. But of special interest is the line shown on the IVB map as "STB". 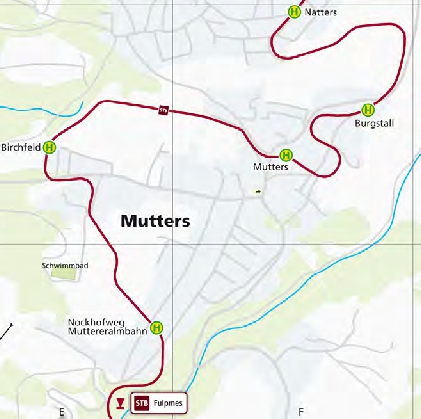 On this stretch, there are many popular photo motives: The Mutters and the Kreither viaduct impress by their architecture. Beautiful views of the Stubai Alps, the Europa Brückee Bridge and into the ravine of the Sillschlucht, the Wipptal valley and on Innsbruck even today still attract special attention. The train station of the Stubaitalbahn are worth a visit - some of them are protected landmark buildings. Since the stations were changed at little extent only, you can still admire the architecture of the last turn of the century here. 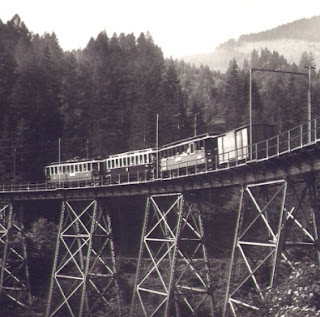 So one tourist site describes the Stubaitalbahn (Stubai Valley Railway). Opened in the early 1900s ... 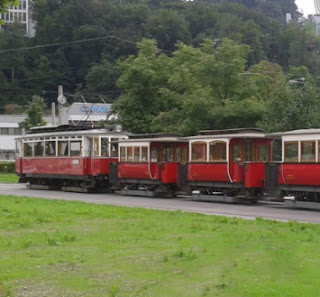 ... it is now fully modernised and integrated into the Innsbruck tram network. 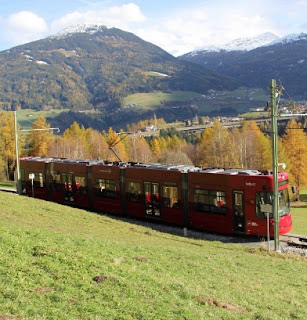 Daily frequency of the full line is hourly. 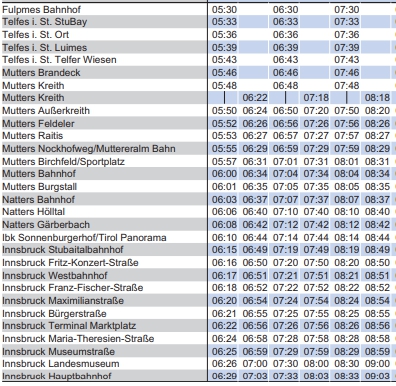 Even more intriguing for a UK resident where trams seem to be ideal but too expensive to build, is tram line 6. This runs summer weekends only plus school holidays Monday to Friday. (A modern tram service!) 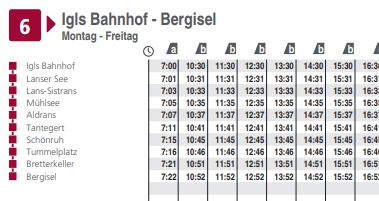 The Line is gloriously scenic ... 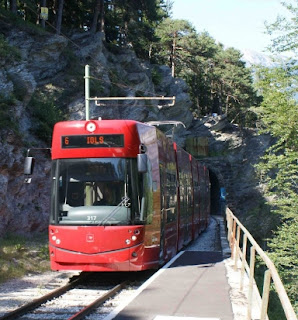 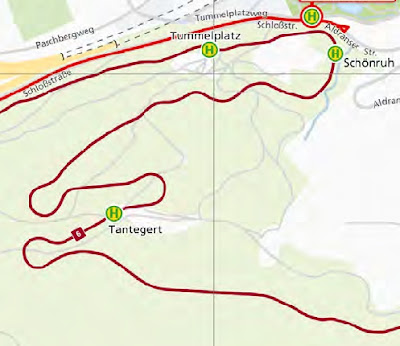 It connects with tram route 1 for Innsbruck centre at Bergisl. 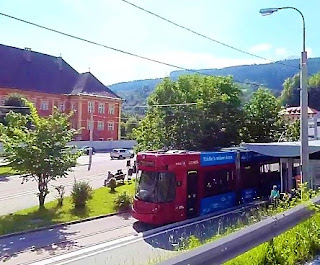 Two more reasons for spending some time at Innsbruck.

Technology Triumphs!
fbb is indebted to Sheffield correspondent Roy who, on his public transport peregrinations came across this at Manchester Piccadilly Station.

fbb would prefer to use a drinking fountain ... 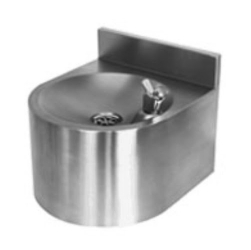 Even better, the ones with metal cups on a chain! 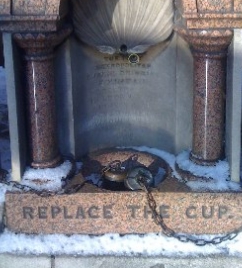 And Talking of Water ...

... these are Sheffield's three Redmires Reservoirs beyond Lodge Moor (Bus 51). 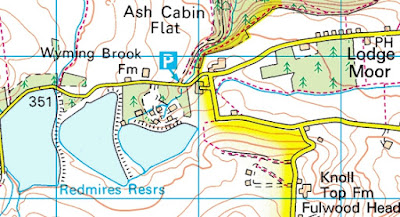 Sheffield resident David Parkin has written a book giving a fascinating history of the area but wonderfully enhanced by his own wildlife pictures. 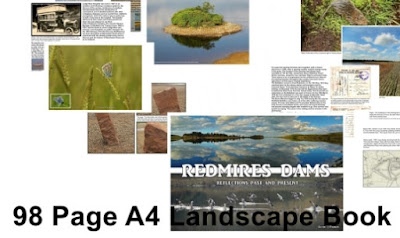 There is even a picture of a bus in it. It also carries and acknowledgement of fbb's contribution ...

... although the old man cannot remember what he contributed!

Until relatively recently, "commuter" buses were extended from Lodge Moor to the Wyming Brook terminus, just short of the lowest of the three dams, but, back in the day, Sunday journeys were extended on the instructions of the Pinfold Street inspector. Many three bell loads were carried.

An attempt to revive the leisure trade was made by the pre-privatisation PTE ... 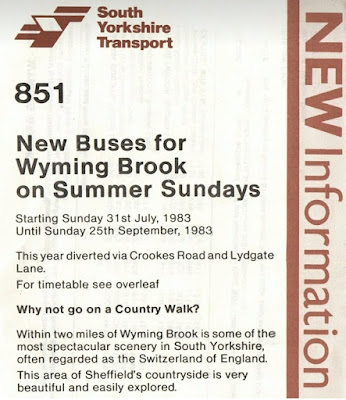 ... but it was never a roaring success.

Snail's Progress
Work is continuing on the refurbishment of Church Square at Peterville after the attack of the killer snail. 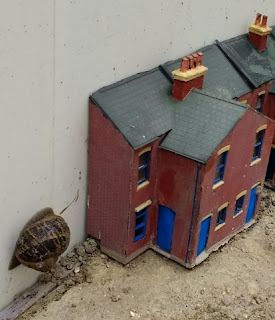 But more work needs to be done with the foundations of the terraced houses (!) and the yellow painted building (the back of a small grocery shop, mayhap?) is to be repainted cream on the advice of the resident style guru (Mrs fbb) as the yellow is too garish. 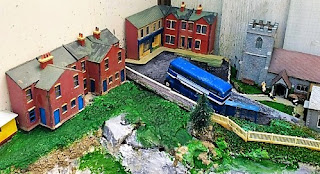 The paintwork on the ancient but modified (by fbb) Hornby Dublo signals did not survive the rigours of total immersion in snow ... 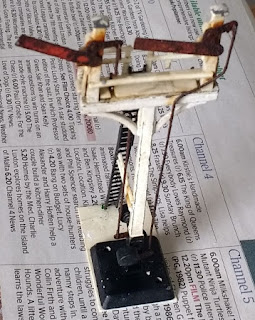 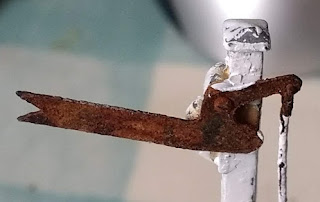 ... into a presentable "home"? Probably not; but there is no place for a "distant" on fbb's little layout.

See First Bus In (?) Action ...
News that the depot in Sheffield has arranged an open day for Sunday 16th September. 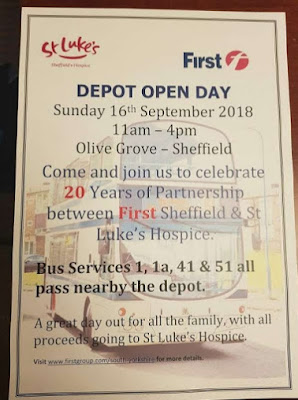 Will they have a full set of timetables for the September 2nd change available?

If so it will be a miracle!

fbb would have yearned to be there but, with Mrs fbb, is leading the Harvest Festival service at church and serving a church lunch for twenty-ish afterwards.

From fbb's Diary?
Except that he doesn't keep one! Yesterday fbb and Mrs took a saunter to the Tranway caff at Colyton for luncheon (ham, egg and chips twice, plus tea). It was good to see the trams busy with happy people (and a few unhappy toddlers!).

Here are two trams waiting to return in tandem to Seaton ... 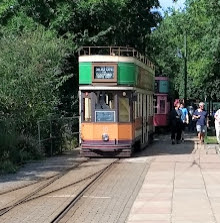 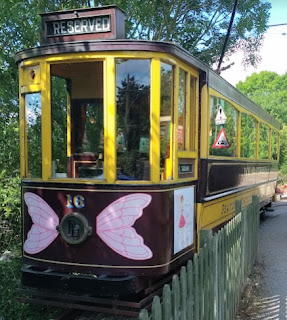 It had brought up a tramful of fairies enjoying their kiddies tea party and was waiting for the return.

There were healthy queues all the time the fbb's were seated in the sporadic sunshine. 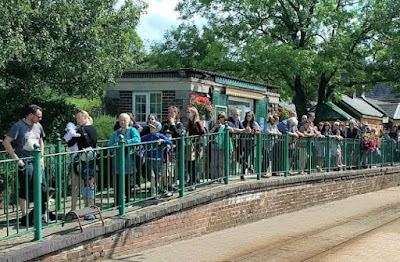 The weather may not be so conducive to open top tram rides as you read this.

In the car park was this interloper. 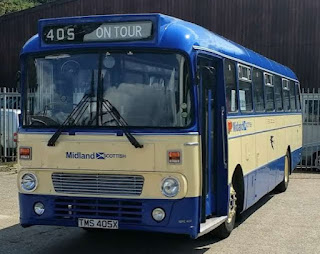 Ex Scottish Bus Group, of course, but most recently earning its keep as a school bus for Sun Ray Travel of Epsom. 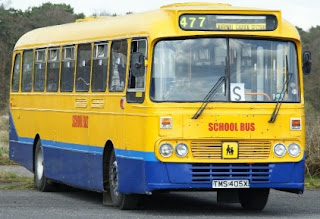 It its preserved form it pops up regularly at rallies and is in fine fettle. Mrs fbb often rode such vehicles from her home in Bearsden opposite the Milngavie Midland Scottish Depot.

The lunch was excellent as usual.

Next Selection blog : Monday 27th August
Posted by fatbusbloke at 02:00