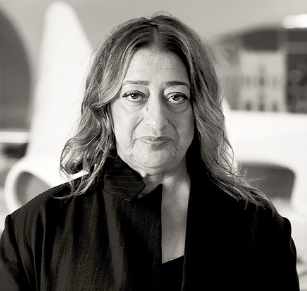 She was the first woman to receive the Pritzker Architecture Prize, in 2004. She received the UK's most prestigious architectural award, the Stirling Prize, in 2010 and 2011. In 2012, she was made a Dame by Elizabeth II for services to architecture, and in 2015 she became the first and only woman to be awarded the Royal Gold Medal from the Royal Institute of British Architects.

She was described by The Guardian as the 'Queen of the curve', who "liberated architectural geometry, giving it a whole new expressive identity." Her major works include the aquatic centre for the London 2012 Olympics ... 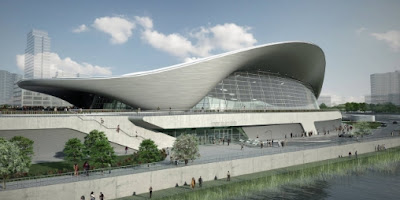 ... Michigan State University's Broad Art Museum in the US, and the Guangzhou Opera House in China.

To which we can add the appurtenances of the replacement Hungerburgbahn in Innsbruck.

Of course, there is more to a funicular railway than the stations. fbb is not familiar with the thinking behind the new Hungerburgbahn, but it needed some very clever planning. An old-fashioned funicular had two cars on each end of a long piece of string. The "coming down" car  balanced the "going up" car and they passed in the middle.

This meant that if you have intermediate stations they must be spaced so that the "up" car stops at the same time as the "down car. Not strictly necessary if you have a driver or conductor on the car to explain but highly desirable if the system is driverlessly automatic. Passengers might panic if they stopped in the middle of nowhere whilst the other car was at a station.

The Hungerbergbahn wanted to replicate the Alpenzoo stop of its predecessor which was NOT in the middle, but near the top - so a station was needed near the bottom.

Ideally, the new line should serve the centre of Innsbruck, but there is a gurt big river in the way.

The new line runs to Congress (bottom left) and has two "matching" intermediate stations at Alpenzoo (upper centre) and Löwenhaus (lower left). Clever!  (Apologies for the poor quality of the above map but LVB's PDF is, in fact at JPEG and, therefore, doesn't enlarge or reduce properly.)

No 3 son, No 2 son, Mrs and two grandsons helpfully took a ride and a video. Many of the pictures are screenshots from that exemplar of cinematographic art.

The ride starts at Congress station, located at the northern end of the superb Congress building ... 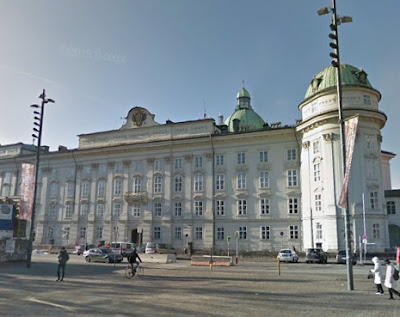 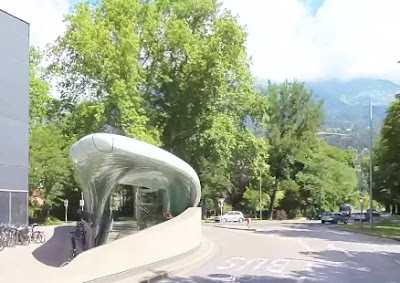 But there is another, non-architectural, surprise: the line is underground! 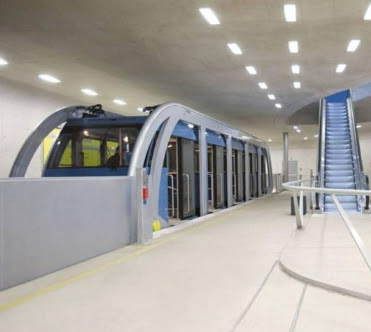 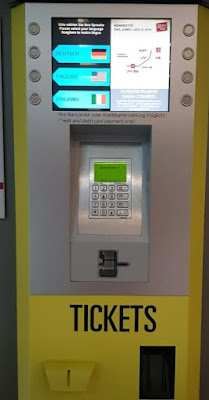 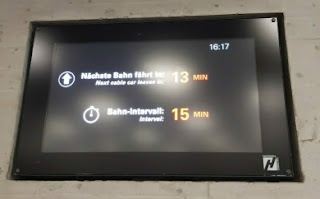 But the actual cars run without obvious human interference! 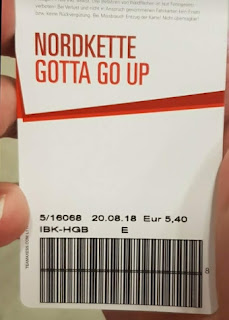 Translating the German text on the ticket could be tricky and fbb cannot advise as to whether descending journeys are tagged "gotta go down". 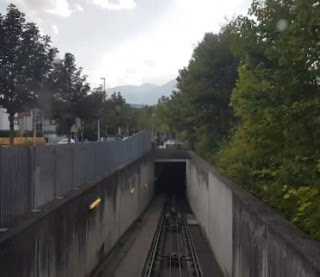 ... at the first stop, Löwenhaus on the river bank, the gang were able to observe the platform doors which descend into the nether regions of the station building and are thus much neater and less claustrophobic that London Undergrounds full height construction. 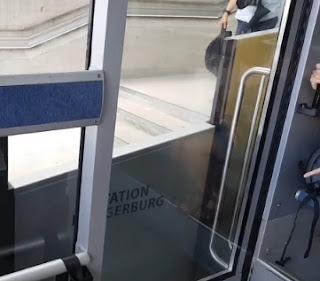 But you could, if so intended, shin over the Austrian versions!

The bridge over the Inn is very stylish ... 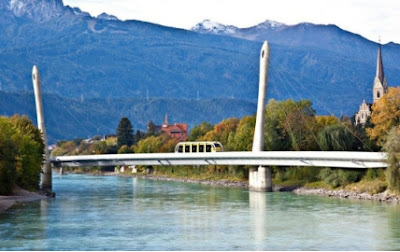 ... after which the cabin is in tunnel again which includes the passing place for the two cars. 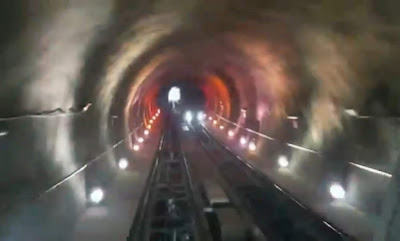 The coloured light display is brief but far more spectacular than can be shown in a video still. And so to the Alpenzoo stop ... 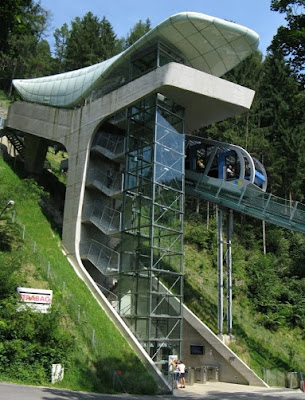 ... perched on a slimline viaduct close to the old concrete version. 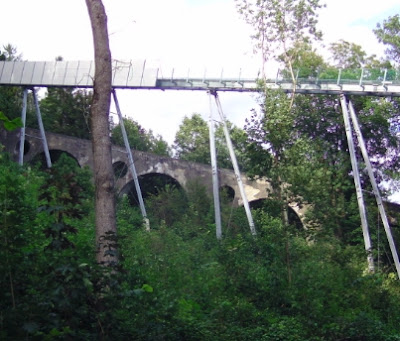 ... therefore to exit the station you have to take a wonderful glass lift down to road level.

Sadly, the upper terminus is soon reached (in about 8 minutes) and the family's joy was over. 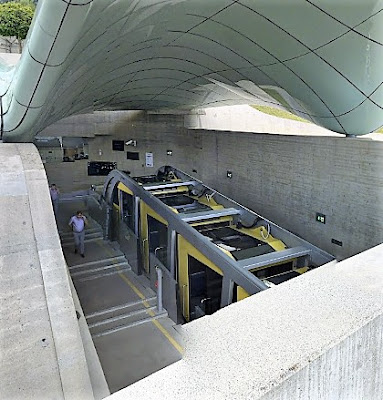 On the video, and on several occasions, remarks were being made about Pops' (that's fbb) excitement at the whole recorded experience.

You bet - yet another item for the old man's rapidly extending bucket list.

It is worth remembering that the funicular is just the first stage of a three-leg ascent into the mountains ... 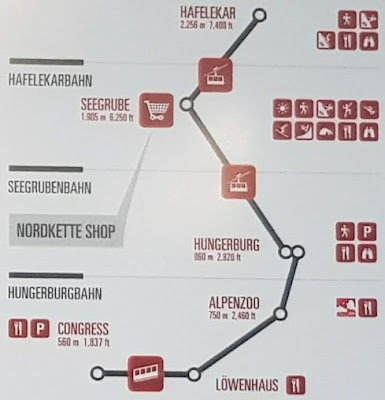 ... but even from a modest 2,870 feet the view is still terrific! (That is the height of the highest mountain in Northern Ireland). 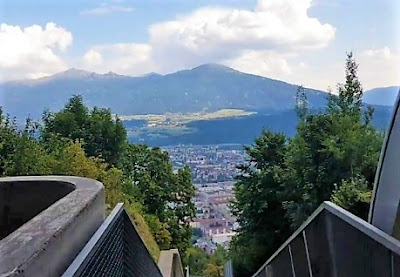 The topmost station (Hafelekar) is at 7450 feet. 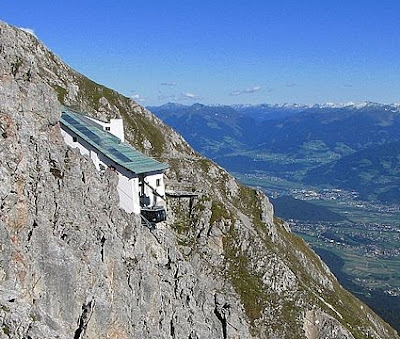 All the gang are now back in the UK, No 3 son home from Basel for the bank holiday weekend; and they are unanimously enthusiastic about their time in Germany and Austria and perhaps a little less excited than fbb would have been with their rides on bus route J and the Hungerbergbahn.

Another motley collection of "stuff" tomorrow.

fbb's memories of Innsbruck from nearly 60 years ago are limited to being decidedly underwhelmed with Innsbruck's world famous "Goldenes Dachl" (Golden Little Roof). 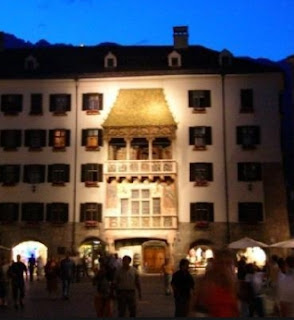 The young pre-fbb remembers that it did not appear very golden and it was, indeed, little. But then teenagers are rarely impressed with tourist hot-spots! The trams were much more interesting.

Next Sunday Selelction blog : 26th August
Posted by fatbusbloke at 02:00