From their pad at Rosshaupten, the family moved on to Innsbruck where they had booked an airbnb** at Hungerburg. Needless to say this location meant nothing to fbb, but a picture sent by No 1 son simply suggested that you could see mountains - not particularly unusual for the town that developed round the Bruck (Bridge) on the River Inn! 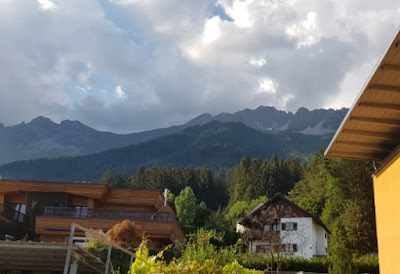 The next on-line snippet was a note to say that they had walked down ... 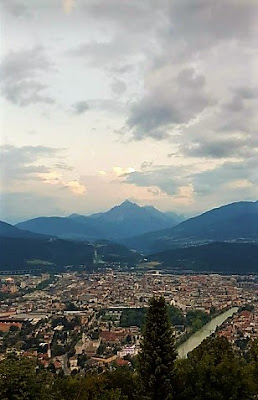 ... to Innsbruck on the first evening and caught the bus back! This email was accompanied by a departure screen picture ... 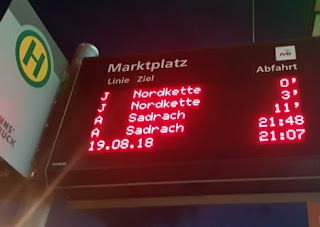 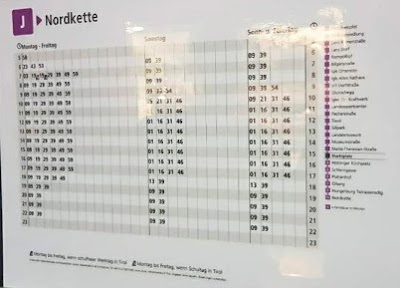 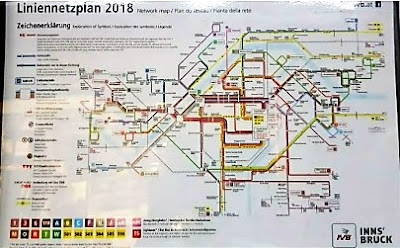 ... and a picture of their ticket. 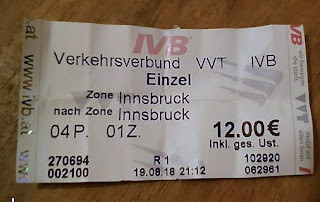 From this we can deduce, my dear Watson, that Innsbruck town has a flat fare zonal system and this bit of paper was for 04 Passengers within 01 Zone, which was "Innsbruck".

But they did not send a picture of THE BUS! But fbb has found an inadequate substitute, courtesy of Streetview, parked at the Marktplatz stop in daylight. 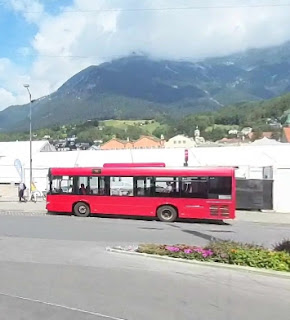 So, off to the IVB (Innsbruck VerkehrsverBund?) to explore. As well as the network diagram ... 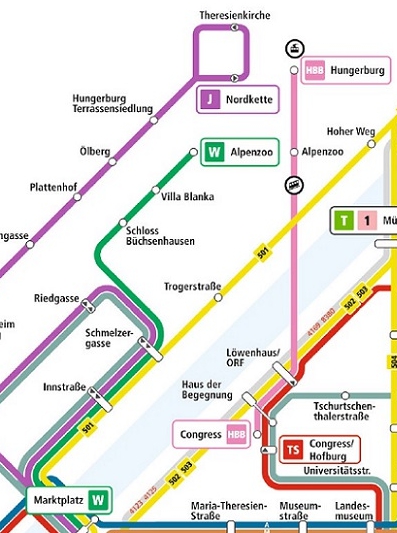 ... fbb found a geographical map which helped a little in the imagining of where they were. (click on the map below for a slightly larger and clearer image) 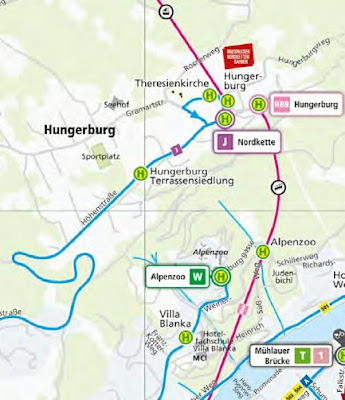 Google Streetview is not as thorough in Austria as in the UK as it concentrates on "main" roads. But the terminus at Nordkette is covered ... 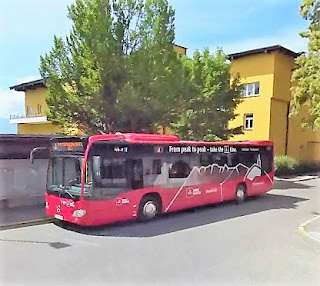 ... as is Theresiernkirche, round the corner on the terminal loop. The actual church (kirche) is modern ... 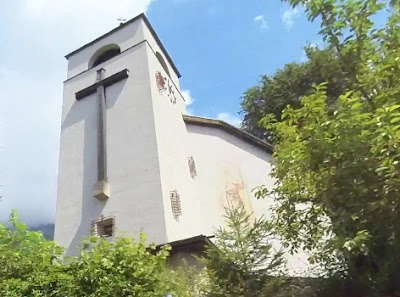 ... just along from the stop and is fully titled as "Zur Heiligen Theresia vom Kinde Jesu auf der Hungerburg".

The mega grey "flag" is standard throughout the network and carries the "H" symbol, the stop name and a list of all services (with their destination; here just the "J") that call there. 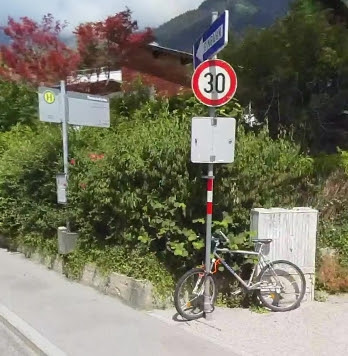 Just to the right of the parked bike is the shelter ... 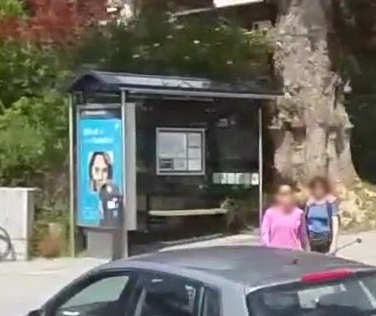 ... where we can see a large frame with network map, departure list and other useful information. This appears to be the "norm" although some less-busy stops have to make do with just a departure list as here at the last stop before the terminus. 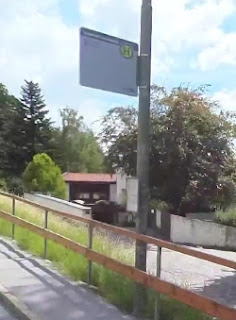 The bus at the terminus had racks on the back. For bikes or for skis? 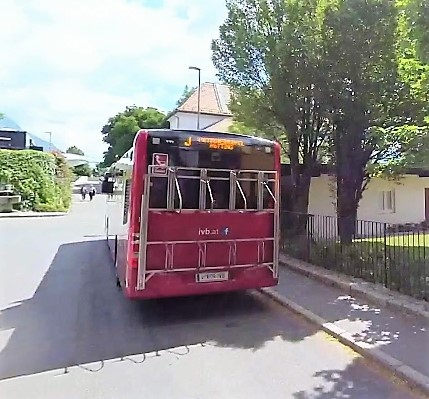 Just round the corner is a cable car station ... 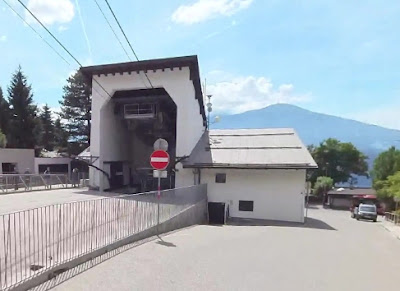 ... the start of a two-leg ride up this particular bit of mountain. 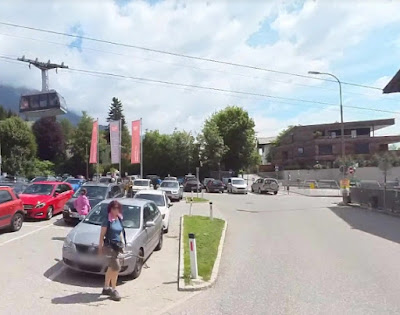 You can just glimpse the upper station (white blob) where you transfer to the next leg. 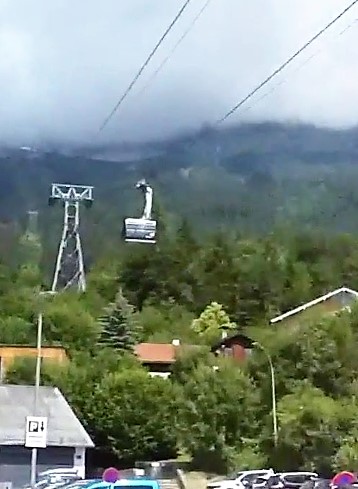 The topmost station is, as they say, "something else"! 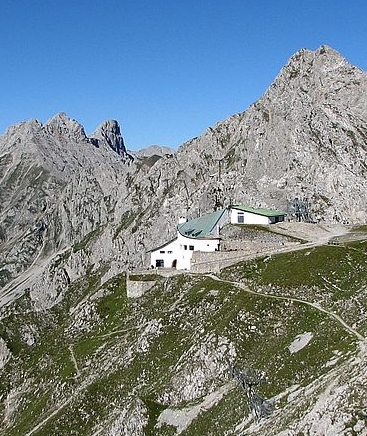 But, for the time being, back to the bus.

Once again, as at Rosshaupten, a time is given for every stop ... 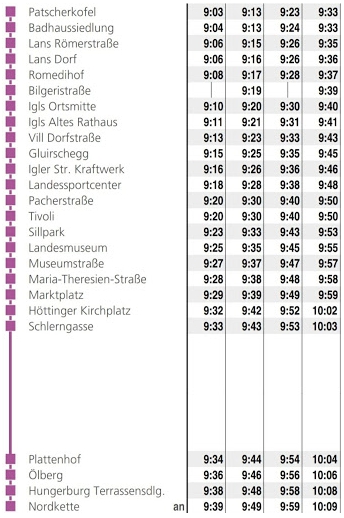 ... which appear to be more widely spaced than we might expect for a UK town service. From the huge white "gutter" in the print, we might well assume that these on-line PDFs are those used for the printed leaflets, although, for reasons that are less than clear, the family did not spend a lot of time on a leaflet hunt for fbb.

** airbnb? A‌i‌r‌b‌n‌b‌,‌ ‌I‌n‌c‌.‌ is a company based in San Francisco that operates an online marketplace and hospitality service for people to lease or rent short-term lodging including holiday cottages, apartments, homestays, hostel beds, or hotel rooms. The company does not own any real estate or conduct tours; it is a broker that receives percentage service fees in conjunction with every booking. The company has over 5 million lodging listings in 81,000 cities and 191 countries and has facilitated over 300 million check-ins.

So it isn't just B&B, nor do you float in the air!

Beyond Belief - Yet Again!
It was Sunday last when fbb reported that T M Travel was introducing their reduced Winter frequency on Sundays two months early. 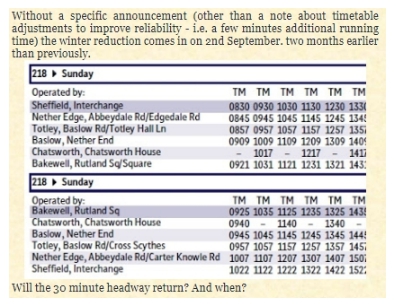 How foolish of fbb to accept what the PTE says without double checking.

In fact T M Travel will be running their half hourly Sunday service AS USUAL until the clocks change at the end of October. THERE IS NO CHANGE of frequency from Sunday 2nd September.

Thus, without telling anyone it has happened, a corrected timetable has now appeared. 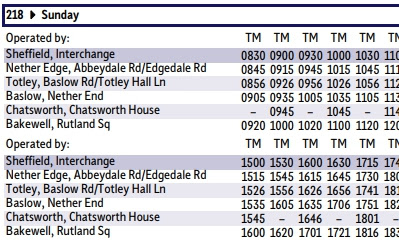 fbb's spies tell him that all this is crystal clear on the registration documents - so there really is no excuse.

On Friday we will return to Hungerburg for something really special; but, as a contrast with network stability, excellent publicity on line, on paper and on stop, tomorrow we return to the company of John Holmes and Sherlock Watson, celebrated transport investigators, as they unravel the dubious delights of the public transport experience in a familiar Market Town.