A day or so ago, fbb was exploring (thanks to our efficient Northampton correspondent) the mysterious new campus of the University of Northampton. 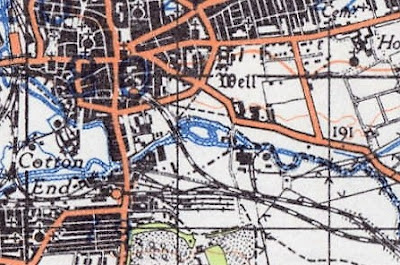 Where soon the eager students will be studying, there used to be quite a chunk of railway as per the above map extract. At Cotton End (map bottom left) is the red blob of Northampton Bridge Street station ... 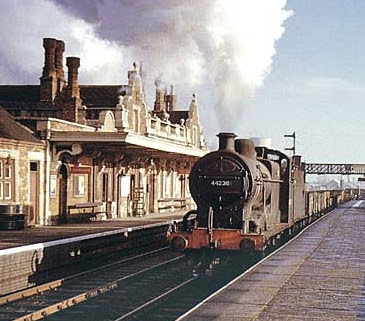 ... long since removed with its site now encased in undergrowth. 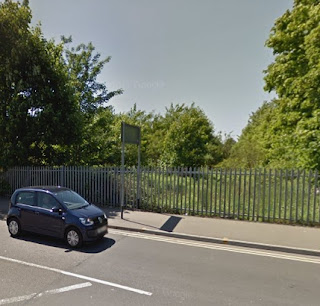 Moving north we have new housing on the right (east) of the main road. 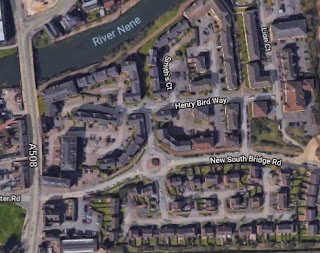 Here were industrial premises (all rail served, of course) ...

... a Steam Saw Mill and an Iron Foundry, plus the Speedway track which also offered greyhound racing. 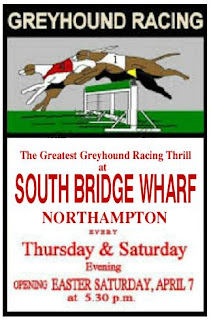 The railway line curving past the dog track served St John's Street station, terminus for trains from Bedford. until 1939 when services were transferred to Castle station. 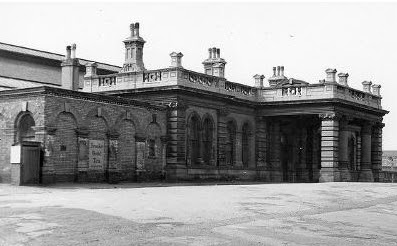 For a sparsely served branch, the station was quite imposing. 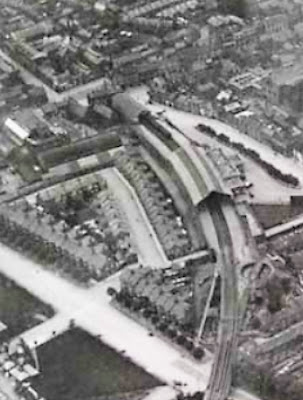 The wide light-coloured road is Victoria Promenade, with the entrance to the town's busy Cattle Market. Again there is very little left ... 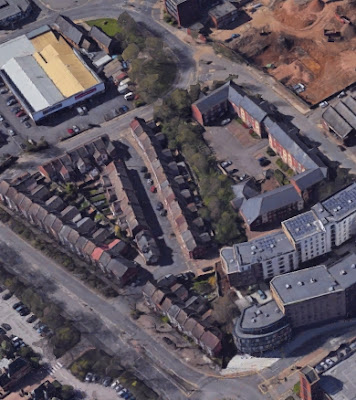 ... just an unexplained strip of trees and an odd piece of retaining wall on Victoria Promenade. 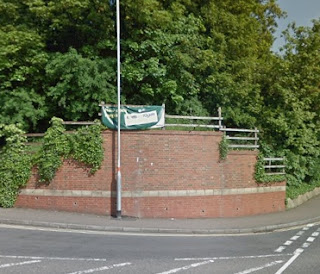 But now let's go to where the two lines joined, named Hardingstone Junction named after the not-very-nearby village.

And there, lower left, is our Survivor. The unassuming grey rectangle was the Midland Railway engine shed. Here it is with a train to Bedford passing by ... 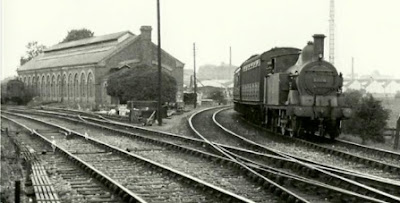 ... and here it is looking east with the cooling towers in the background. 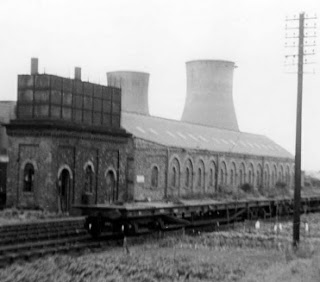 And here it is looking west again, rail-less and decaying, but in glorious technicolour! (technicolor?) 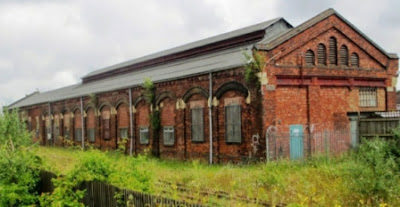 It survived because British Railways used it as a training school for welding, long after it had any use for parking steam engines. It decayed thereafter, half the roof fell in and when the Uni turned up it could well have been razed to the ground. It was in a sorry state.

Yet, there it is on today's campus site plan (lower centre) ... 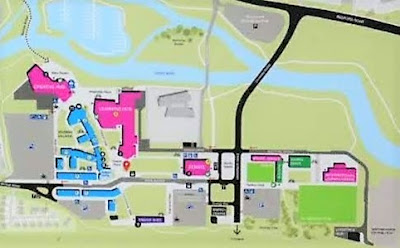 ... and as espied through the sparkly glass of the new people shelters. 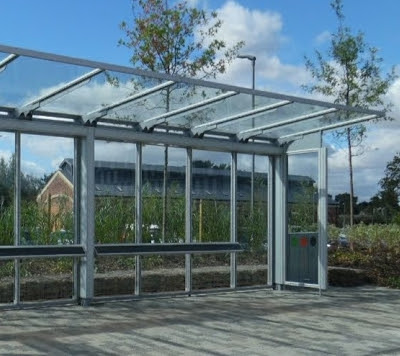 But Alan went one better and nipped smartly along the grey brick road to take an unencumbered picture. And doesn't the old girl look wonderful? 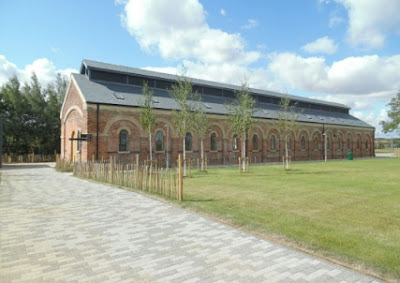 Re-roofed and beautiful, it is now the headquarters of the University's Students Union.

You do wonder what the Midland Railway management would have thought if you could have told them that their lovely little loco shed would, one day, house staff and facilities for students at a University?

Thankfully the Students Union has a heart and records much of the buildings' history on line.

And former local resident fbb did not even know that there was a shed there! Disgraceful.

For old tainspotters, the main loco shed for Northampton was on Main Road, Far Cotton: fork right at the Tivoli cinema ... 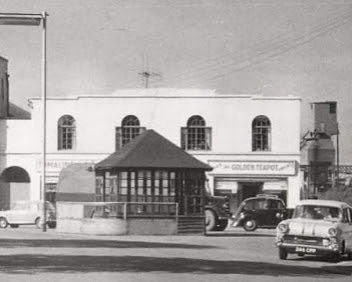 ... and the Golden Teapot caff and you you can immediately spot the coaling tower. The shed, in fbb's teenage days, was 2E ... 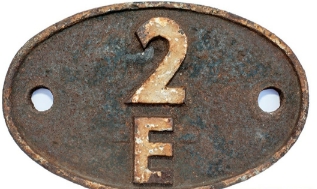 ... and if you were brave and brazen you could wander round "copping" all the locos until the foreman spotted you and asked you ever-so politely to vacate the premises! 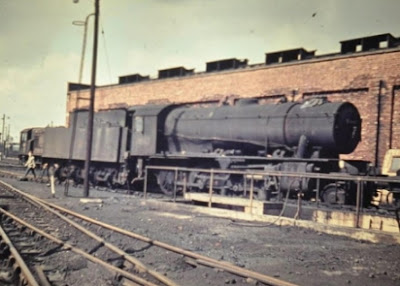 The building which was "the Tiv" is still there, but, when Streetview last passed by, the seemly Golden Teapot had become the Super Sausage! 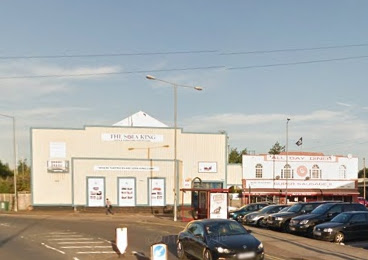 The loco shed is, obviously, now an industrial complex with no evidence of it's past life.

Repeat Patterns
fbb's complaint (yesterday's blog) about undecypherable repeat patterns produced the usual burst of acrimony at the old man's remarks. So as a treat for all those who think that non-repeating repeat patterns are a spiffing and comforting idea, fbb has compiled a timetable for the whole of a Monday to Friday service 88 using the woolliness that many readers love and appreciate (?).

Note that there is an 18 minute difference in running time between the start and the finish of the daytime "about" designation - only six minutes for the evening version.

fbb was a past master at timetable reduction in his years as Editor-in-Chief of the Great Britain bus timetable, so is familiar with the concept. But the GBBTT was never more than a guide, it would not be advisable to reply on its summaries without more careful reference to the real thing.

And if it doesn't matter, why do VOSA enforcers stand at street corners and fine operators for not running to time?

More scraping the bottom, middle and top of the publicity barrel tomorrow!

Next Newbury blog : Thursday 16the August
Posted by fatbusbloke at 02:00