These days, you will see very few of these on the National Railways of the UK compared with years gone by. 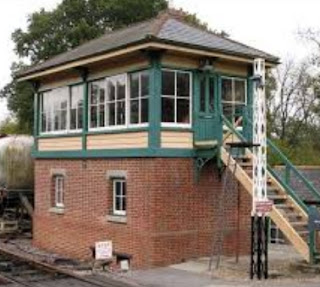 This small one is at Kingscote on the Bluiebell Railway, this large one is at Stirling and is still in operation. 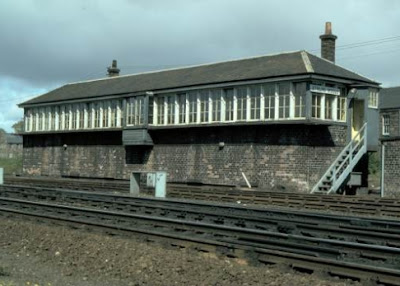 The size is dictated by the number of levers ... 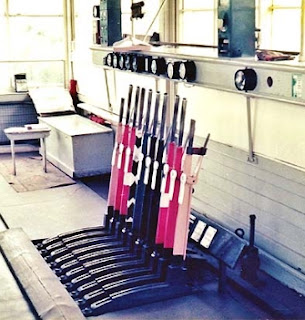 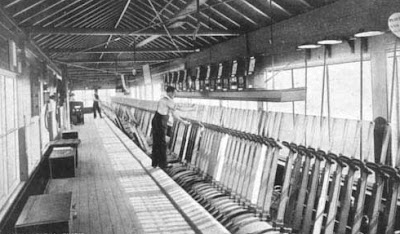 This monster used to stand at Rugby!

Even the most disinterested observer of the railway scene knows that these levers are connected to points (for changing tracks) and signals for telling the driver what to do. Slightly more inquisitive folk will know that the signals are controlled by wires ... 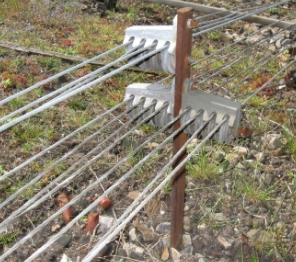 ... and the points by heavy metal rods. 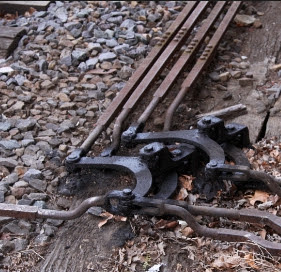 When you change a model railway point, the blades (the bits that move) are usually pivoted, sometimes obviously ... 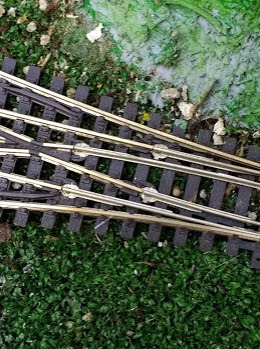 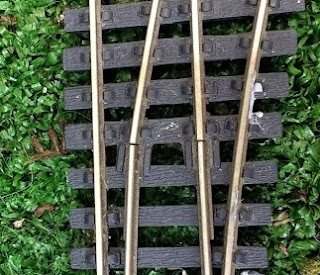 But with real points you are actually moving the metal and it is very hard work!

And this is Terry Deary ...

... author of the popular "Horrible Histories" series of books.

He has also penned a series of "Gruesome Guides" to some of the UK's tourist hot-spots. But unbeknown to fbb, he has also written a book, equally full of grue, about the Victorian Railways. 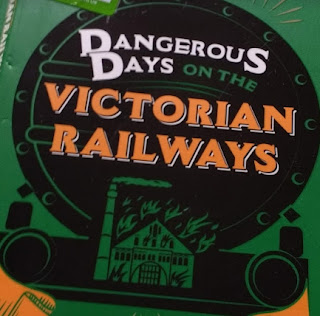 Mrs fbb found this copy in a Sidmouth charity shop and snapped it up (for a whole £1) for fbb's delectation. Copies are available on-line at various prices.

It charts the early days of the railways, their accidents and the changes to the rules and primitive technology to improve their safety. 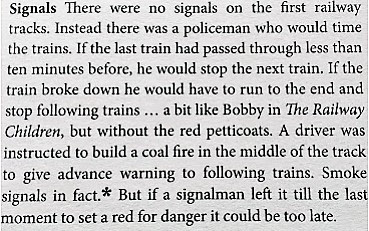 Mr Deary explains how human error can ruin the best designed systems. This happened in 1874 when all right was all wrong! 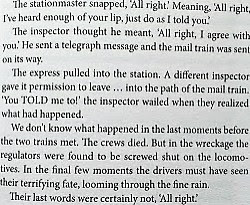 So more technology was added to try to prevent mistakes and their fatal consequences.

Even wire and rod signalling is now far more sophisticated than it might at first appear. It is not just levers, but other technology in the box itself. 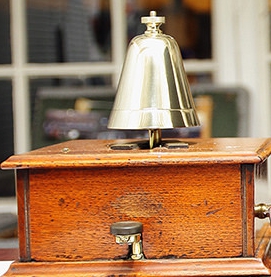 A complex series of bell codes are used to communicate with neighbouring signalmen. 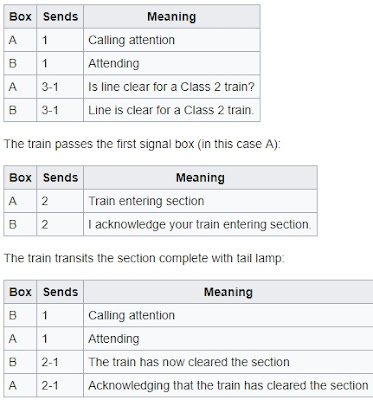 All these bell codes were recorded in a huge log book.

But underneath those levers is the real sophistication. Here you would find what is, in effect, a computer system. 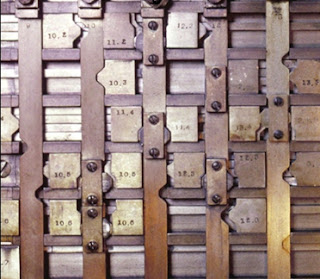 As well as moving wires and rods, those levers also move bars up and down which interact with locking pieces called tappets.

So to move the lever on the far left the white locking piece must slide out of its keyway and into a similar slot on the bar next to it. Ditto the two rods at the right. This means you can move one lever or the other but never both. This physically stops you doing dangerous things, like setting a signal to "go" when the points are set against the train.

Even the humble semaphore signal is more clever that you might think. If the wire breaks, the signal will fall to the stop position ... 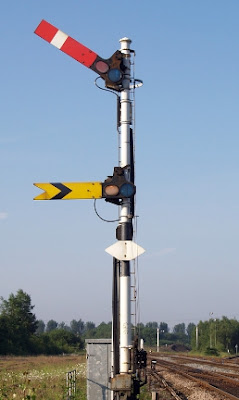 ... showing a red illumination rather than green at night.

Even if the signalman is looking at the back of his signal, there is an arm which obscures or reveals a white light, again so that the signalman knows what indication the train driver will see. 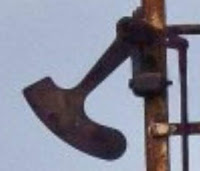 All this explains why there were so many signal boxes. The signalman needed to see every signal and point that he controlled and he needed to be close enough to all of them so the physical effort of pulling rods and wires was achievable.

Alas for the nostalgia-freaks, much of this is now done electronically with clever technology replacing the clever but crudely analogue systems.

Rail enthusiasts grieve at every disappearing box and weep as they are replaced by uninspiring portakabin type sheds. 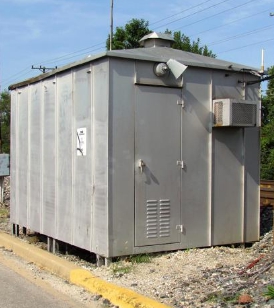 But every small boy would want a signal box for his train set, and most more serious modellers seek to reproduce something realistic to control their signals.

fbb has a small signalbox at Peterville and it is currently undergoing a major change.

Thanks to No 2 grandson.


Next signalbox blog : Sunday 5th August
Posted by fatbusbloke at 02:00