It all happens from Monday 3rd September. The second Metrobus route (M2 with no Sunday service) starts, replacing the Long Ashton Park and Ride. 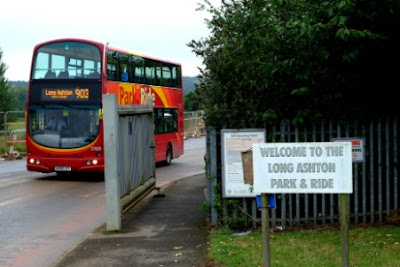 The local press has found plenty of people who are not happy with the change.

Passengers using the park and ride service being replaced by Metrobus next month have complained it will take a lot longer than the service they already have - and won’t take them where they want to go.

And in response, Metrobus has told passengers currently using the park and ride service that they will have to walk half a mile to get to the same stop they currently get off at.

Of course there will be plenty of "commuters" who are happy with the new service, but the press choose not to quote them!

The publicity leaflet is now available on-line in a sort of brown/orange colour to match the (not very) distinctive orange trimmed livery. 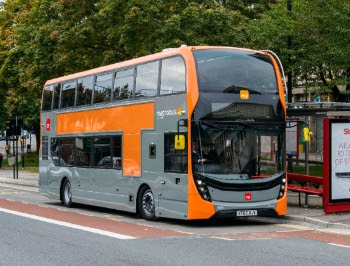 For a supposedly prestigious new-style service, it takes a bit of on-line excavation to find it. You have to start with this ... 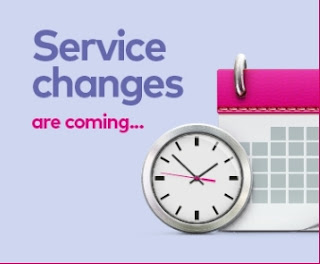 ... which leads to a page or more of PR guff; but no timetable. However is you go to "routes and maps" front the menu icon ...

... (you did know that was the "menu" icon, didn't you?) there is M2 in an illogically ordered list of, presumably, PDF files of "routes and maps". 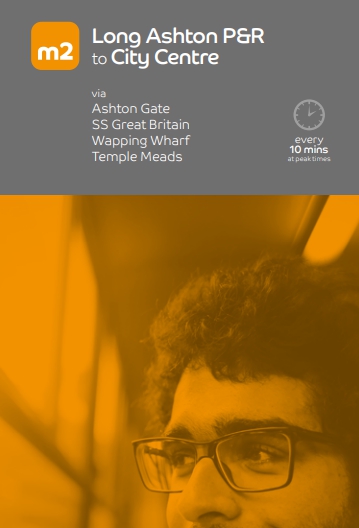 But there is the full M2 leaflet.

And the very good news is that, unlike some Park and Ride services, fbb's old codgers' card is valid!

More visible from the home page of the web-site, however, is this ... 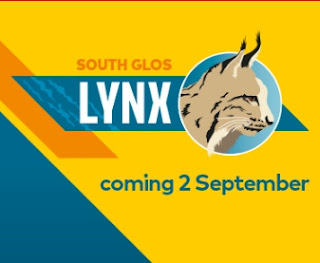 ... which guides us to a full Yate services booklet. This appears to be an excellent publication complete with a Yate network map and all the timetables.

There has also been a launch of buses in the new livery as hinted at in a previous blog.

And, in a continuing torrent of good news, First Bristol has just revealed the first of its new vehicles for Bath in a new blue Bath City livery. 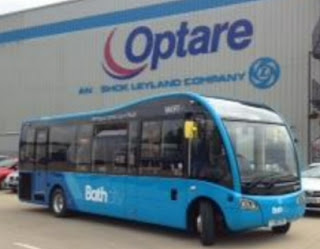 Rather than speculate, fbb has a trip to Bristol planned for Monday 3rd September, so a full review of these developments seen first hand will follow later that week.

Birmingham
The bigwigs of Brum have made an announcement! 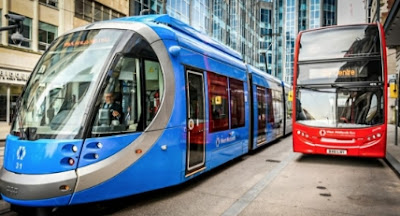 Trams (which were pink), will now be blue and all buses (some of which were dark grey) ... 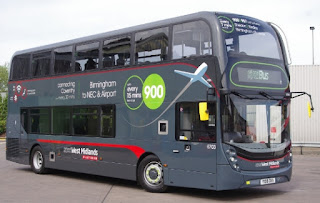 Except in Coventry where buses will be blue. 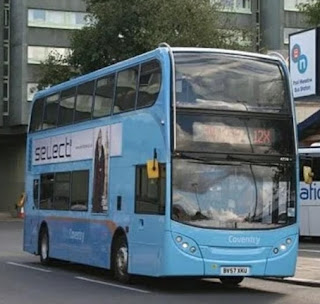 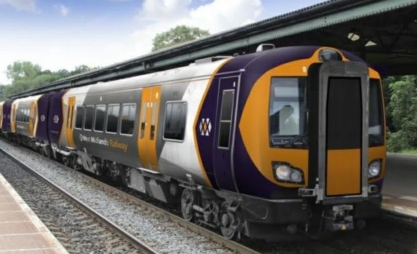 The picture above with pallid orange "stuff" is of the first elelctir train to arrive at Bromsgrove Station. Hitherto, trains ran every 20 minutes to Redditch and every 20 to Longbridge. The Longbridge trains have all been extended to Bromsgrove.

Clacton - And It's All On-Line - Wrongly!
From 29th July (that's July, that's LAST Month!) First Bus withdrew most of their town services network in Clacton, Essex and closed their depot.

The town services were taken over by Hedingham and District, a GoAhead company. So this appears on-line. 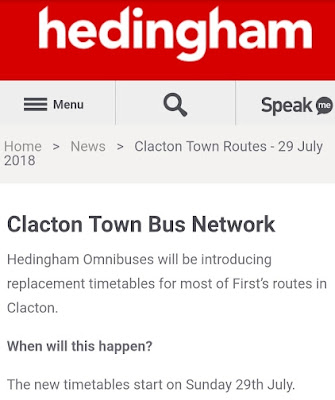 So far so good. But this is also available on line. 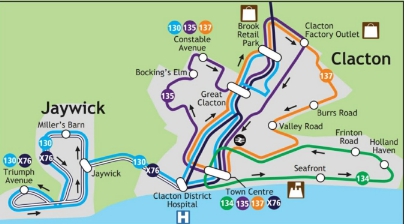 And there is a special fares offer too! 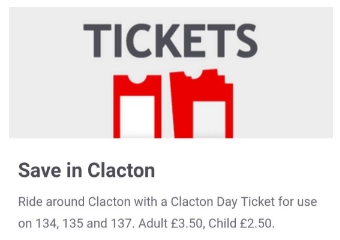 But, hang on a sec! Are these three (or is it four?) loop services the same as First's network.

Worry not, confused passenger. Because on-line maps and routes as supplied by First Essex are still showing the services that finished on 28th July.

Almost everything in this on-line booklet is utterly and completely wrong. Go to the "routes and maps" section of the Essex site ... 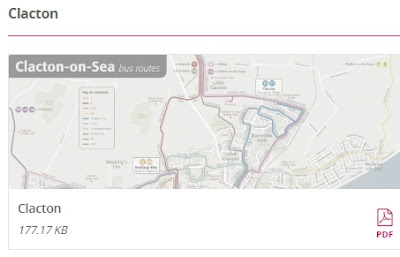 And there is this map! 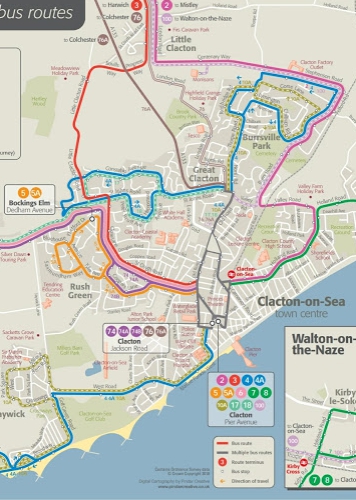 First have produced a nice new booklet showing their renumbered services between Colchester and Clacton and on to Walton on the Naze. It includes a very different map ... 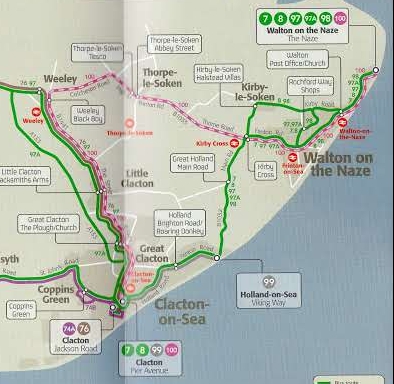 ... which an Essex correspondent assures fbb is correct - but fbb cannot find it on-line.

Just in case Mr Picky Anonymous complains, let fbb assure Essex boy and Essex girl that the timetables on both companies' web sites are, indeed, for the recently introduced new operator and networks.

But why is much of the other information wrong and misleading?

fbb understands that his revelations are whizzing off to the First Essex management. How long will it take to sort it?

We will examine some of the Essex changes in more detail in tomorrow's blog; there are further developments from 2nd September.

Similar Problems Continue in Sheffield
T M Travel are reigning in on some of their peripheral work. A couple of early morning journeys on service 271/272 are currently tendered to TMT.

In the forthcoming changes list issued by Travel South Yorkshire (the PTE in a frail disguise!) we read this:-

And, lo and behold, the new timetable appears on-line. 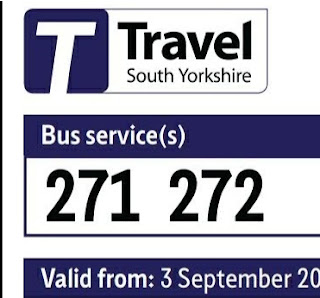 The "what's happening" panel is not  as helpful as it could be.

No mention that TMT will not be there!

But there is the timetable ...

... clearly showing the T M Travel operated journeys, 0610 from Sheffield and 0700 from Castleton!

And in case you want to challenge fbb, the revised First Bus replacement trips are quite different.

Thankfully this bludner has now been corrected but with no indication of the change on the TSY web site, e.g "revised and corrected leaflet". When Sheffield bus watchers complain to the PTE they are told something like this, "Sorry, but our timetables are created automatically - something must have gone wrong."

Hits From Trent
Seen by Sheffield hack, Roy in Manchester ... 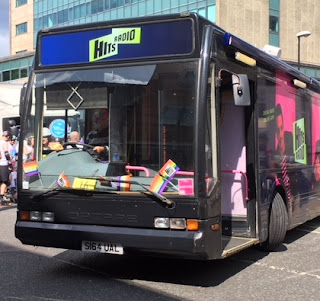 ... formerly badged with a different Radio Station name and logo. 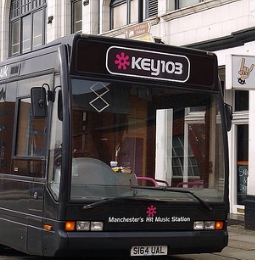 fbb is not sufficiently familiar with the Mancunian popular music broadcasting "scene" to explain the difference.

It was previously in revenue earning service with the now defunct MASS transit ... 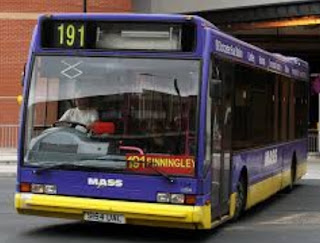 ... and started its varied life off as a Rainbow 5, running between Nottingham and Derby. 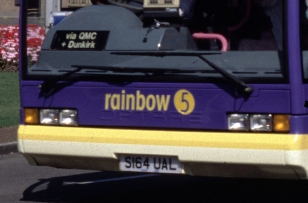 Next Essex blog : Tuesday 28th August
Posted by fatbusbloke at 02:00