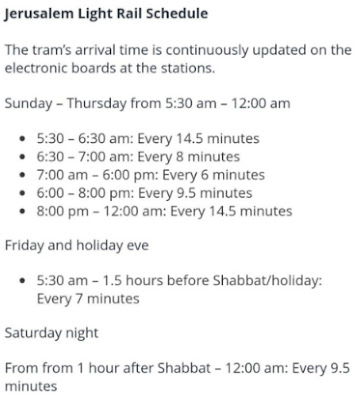 Things to note:- the system shuts down completely for the Jewish Sabbath which runs from sunset on Friday to sunset of Saturday. Also; every 14.5 minutes? Completely un-memorable, surely a simple every 15 minutes would make more sense to potential passengers, especially if they have a tight connection for an onward journey.

No 1 son sent this picture of a tram stop ticket machine. 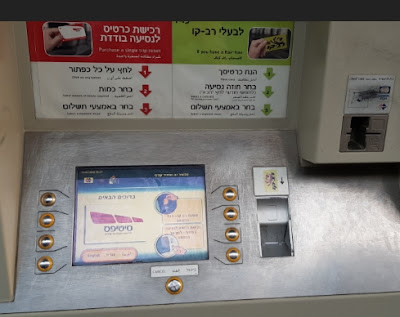 The basic paper ticket fare is ... 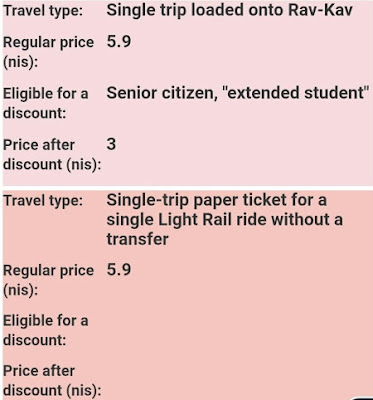 ... 5.9 nis (New Israeli Shekels) with a shekel being 20p. Effectively a flat fare on £1.20 but with transfers allowed within a set time period. Cheap as chips!

The discount, however, only appears to be available on a Rav Kav (stored value) card, as do discounts for multiple tickets. 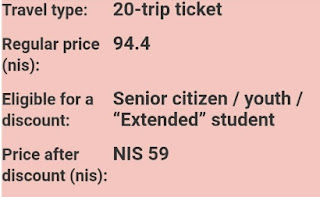 The web site explains come of this, and warn the user about the need to validate tickets on boarding the tram. 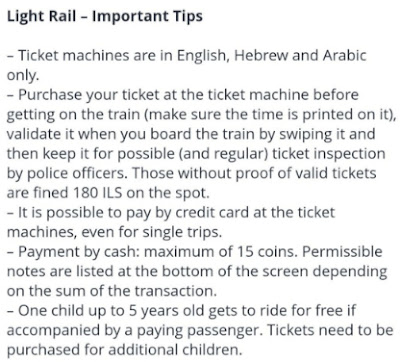 Failure to validate incurs an instant fine of 118 nis, issued by aggressive and unforgiving transport police. 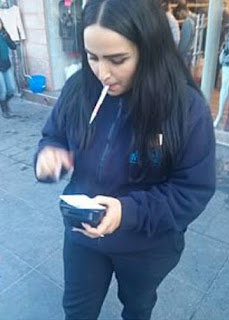 It is easy to forget top validate on a crowded tram and vociferous complains have been laid at the door of the operator impugning their motives, suggesting that the whole fines system is just a way of increasing revenue.

Didn't First Bus once advertise their "standard fare" as £10, which would be charged if the hapless passenger offended in any way by inadvertently (of maybe vertently) paying the wrong amount? 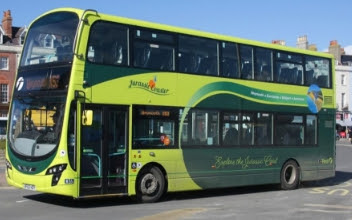 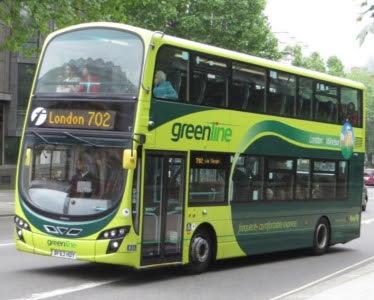 These buses are now appearing in a real Jurassic Coaster livery and they do look rather smart. 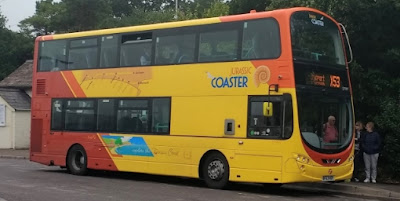 The route is but a shadow of its former self (once Exeter to Bournemouth) but the branding is a positive step. Sadly, the posh new scheme is still not universally applied - which probably means its impact will not stimulate ridership for this summer season. 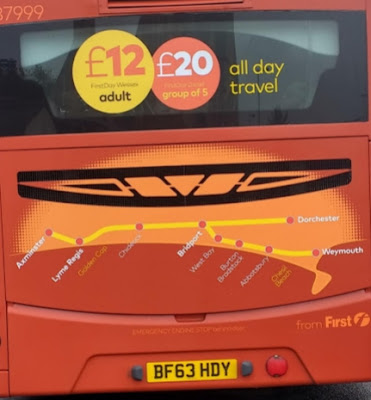 £12 for a day rover is a bit rich, only suitable for the rich; but £20 for a party of 5 is laughably cheap. Odd pricing strategy, perhaps?

Jaffa Cake Jaunt
No 2 grandson (aged 14) has just spent a few days with the old crusties. Taken by a parent from Wantage to Andover, he has become very familiar with the journey which is relieved via his "device" and the purchase of a packet of Jaffa Cakes. 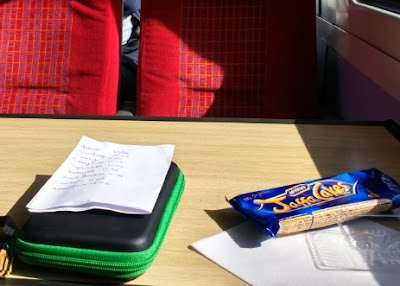 These used to be £1.20 for a pack of three, that's eight bob a biscuit in real money. 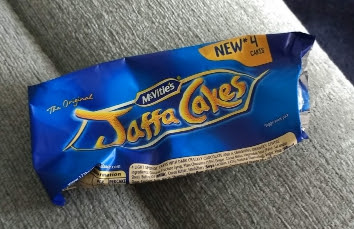 ... and they coast £1.50; a significant saving per piece at seven and a tanner each. But, as No 2 grandson points out, that's OK if you want four - AND the packaging is grossly inferior with no inner sleeve. Shameful.

Co-incidentally, dad had sent fbb a picture of the Jaffa Gate in Jerusalem ... 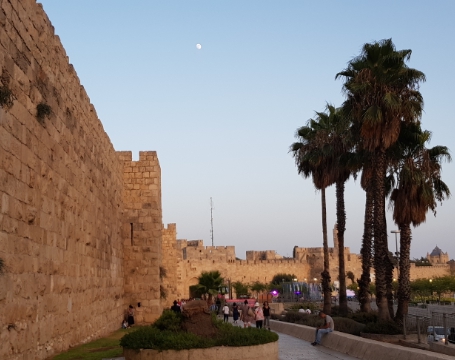 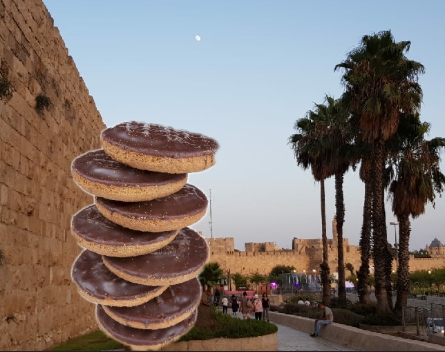 Sadly the youngster showed no interest whatsoever in the stunning fact that he arrived at Axminster in a uniquely liveried train. 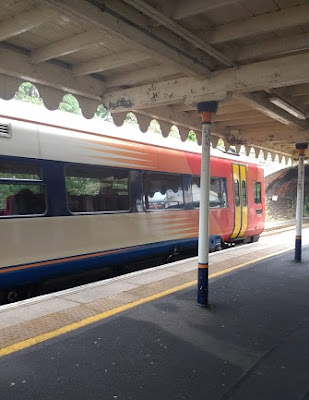 No sense of, like, occasion - the youth of today

Junior's Jolly Jammy** Jaunt
A tradition of the family (two grandson, son and daughter-in-law) is to visit to Sidmouth to buy yummy snacks. Having been berated by a really nasty comment on a recent blog because he had used the work Moslem rather than Muslim, fbb was interested in a family snack trip by motor bus.

(For the record Moslem and Muslim are both acceptable versions of the appellation for a follower of the Islam faith. Neither has any political, religious or racialist connotations BUT Moslem is just a bit old-fashioned, just like fbb)

Anyway, the outward Jaunt was by Stagecoach service 9A which ran 23 minutes late due to traffic in Lyme Regis. At each stop the driver apologised for the delay and when the gang alighted at Sidmouth ... 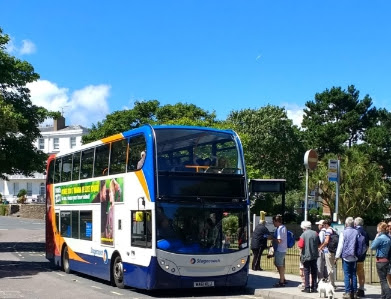 The terminus st Sidmouth Triangle is provided with a really useful electronic display ... 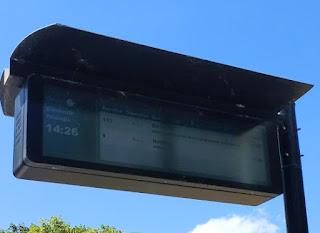 ... a VDU screen  of unhelpful legibility. Now the old dot matrix versions were visible - so much for new technology. 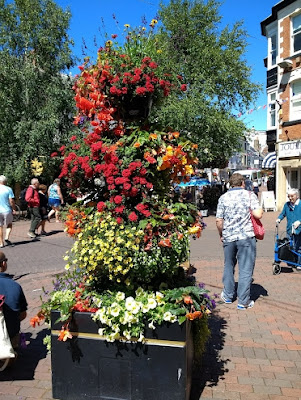 ... some paid-for publicly, some provided by a pub but pretty as a picture both. 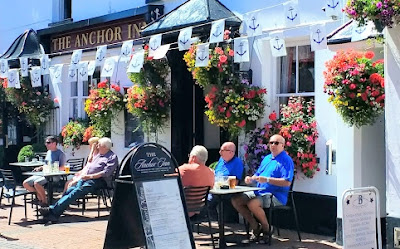 After the Moslem/Muslim unkindness, fbb was very pleased that his snack was to be obtained at a purveyor of doughnuts ... 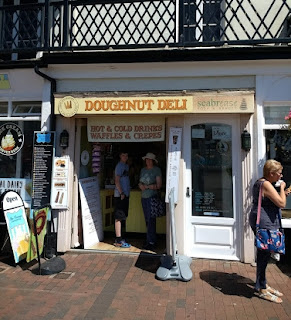 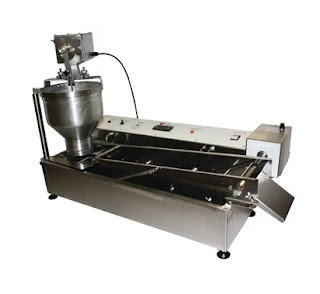 At only about three million calories a nut (actually a ring), the snack was well worth the journey. Sadly they were served in a bag marked "Do-Nuts". 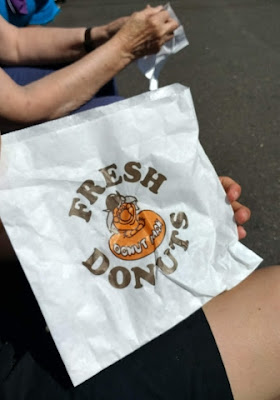 The bus ride back was the twiddly way with Axe Valley ... 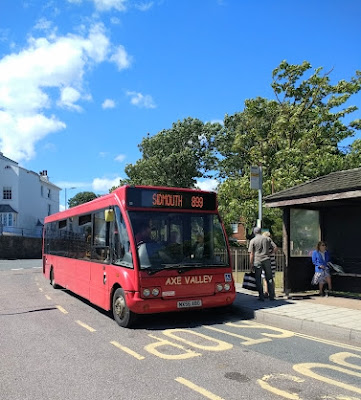 Sadly (again) the fit and vibrant grandson fell asleep at the best bit - no sense of, like, occasion - the youth of today.

Fare with Axe Valley, £2.90 and no reduction for lack of change. But the trip was spot on time!

** Of course, they were snack sized ring doughnuts, dusted in sugar ... 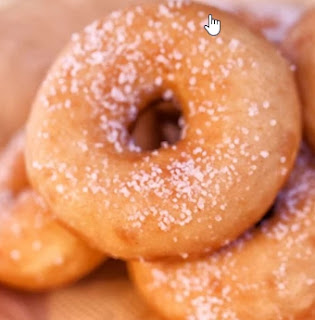 Today the Sidmouth Folk Festival gets under way. Over 80 activities and events in just over a week. Worth a visit, but go by bus or use the Park and Ride. The town itself will be, to use a technical term, full. 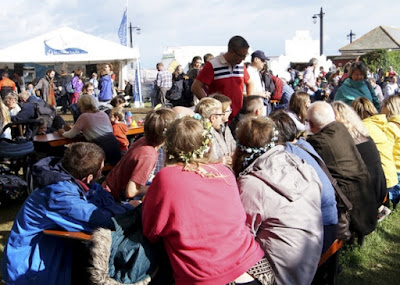 That shelter (above, upper right) is where buses used to terminate; at the western end of the esplanade. 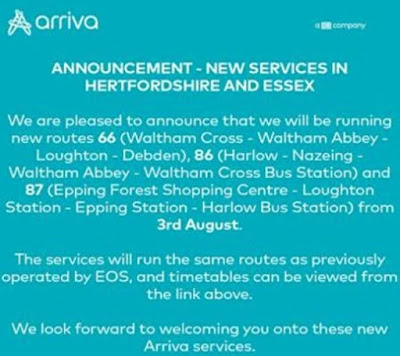 Common sense prevails - eventually; after two days in which to alienate passengers. Let us hope that the pen-pusher who caused this unnecessary mess is pushing his or her pen at the desk in the JobCentre!