A couple of months back, Stagecoach in Exeter issued a "consultation" document about changes to the east of the city. This "consultation" is typical of modern management style. The cynical (not fbb, of course"!) would say that, having consulted, Stagecoach would do what it wanted anyway. Perhaps it is kinder to say that the plan would go ahead unless there was a huge mega vociferous uproar; a few moans can be quietly ignored.

The changes all happen from 2nd September; so first the easy bits. 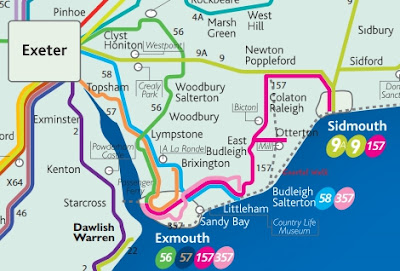 Currently hourly as part of the "back road" route to Exmouth, the frequency of service 56 (GREEN) to the airport will be doubled. 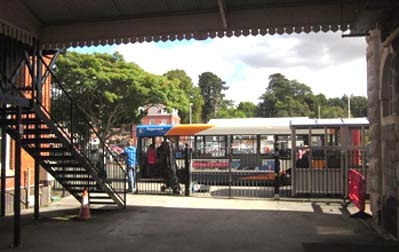 ... where it is shown on the departure screens and is announced over the loudspeaker system. EXCELLENT integrated transport!

It also serves the massive Met Office building where barriers prevent anyone from stealing the weather. The blue sign tells buses to wait for the barrier to be raised. 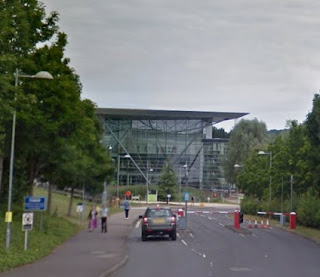 The Science Park area is also served by route B at peak times and the red Park and Ride. 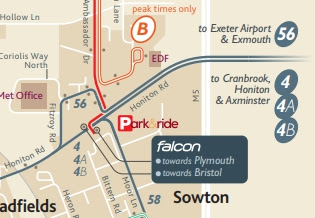 In the past route B ran to the Met Office! Stagecoach explains all about the new improved 56 on their web site and publishes the timetable; not just an "interim" working timetable, but what will become the printed version. 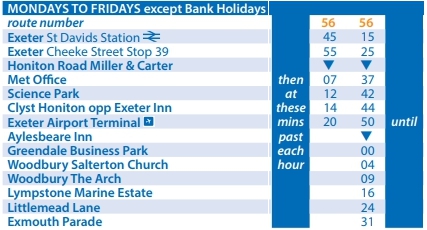 It is really encouraging to see a bus company taking a commercial risk to develop better services; hooray - but this probably isn't!

East Devon District Council, the East Devon Growth Point and Devon County Council have joined forces in a ground-breaking arrangement to fund significant enhancements to the section of the route operating between Exeter St David’s, the City Centre, Met Office, Science Park, Sky Park and Exeter Airport. By providing improved transport links, the enhanced service will help support the on-going development of the region over the next 3 years.

Presumably paid for the the councils and the "East Devon Growth Point".

The route between the Met Office and Airport will be amended to serve Clyst Honiton instead of the A30. 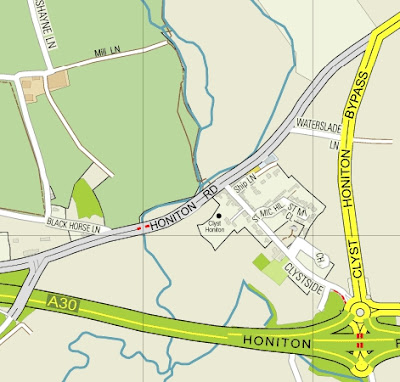 Service 4 trundles along the Honiton Road past the Exeter Inn  timepoint ... 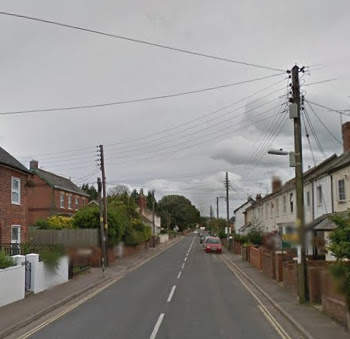 ... turning right at the pub and back to rejoin the A30 and reach the airport.

Combined with route 4, this will provide twice the number of buses serving the Science Park.

Sorry to be picky, but not quite true. Currently the 56 is hourly and the 4/4A every half hour; that's three buses an our. From 3rd September this increases to four - an improvement, but not a doubling of the service!

The timetable is coordinated with route 4 to provide a regular 15-minute Monday to Saturday frequency from Exeter. 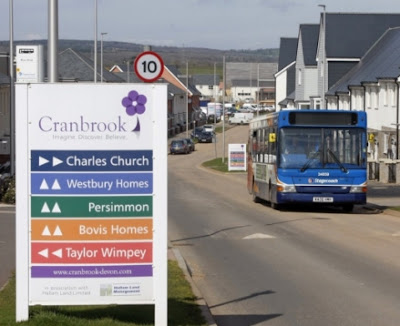 Service 4 continues via the rapidly developing Cranbrook, thence on the Honiton and Axminster

In recognition of this innovative partnership approach and to highlight the increased connectivity between the locations, the route will be branded ‘CONNexIONS’. All five buses will feature a bespoke external and internal livery design plus free Wi-Fi.

Gettit? "ex" in CONNexIONS is for Exeter as in ex-citi. 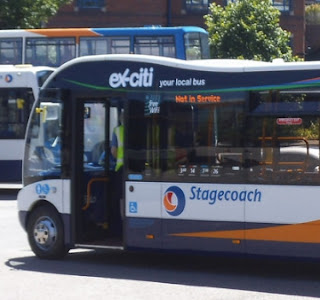 fbb hopes to try the route in the first week, but it coincides with the start of Metrobus M2 in Bristol. Which will offer the greatest level of ex-citi-ment?

But there are changes in some of the citi's local services on the same day. A tricky explanation which will be blog-tastically reviewed tomorrow. 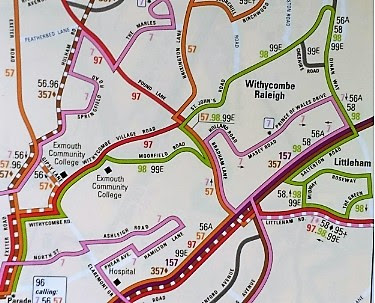 In the meantime, a cut-back at Exmouth. Service 98 serves Withycombe ... 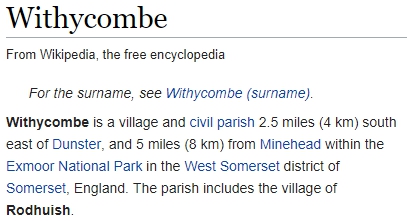 ... but not that one. This one is often known as Withycombe Raleigh (after Walt who hailed from these parts, sort of). Once upon a time it was a small village close to Exmouth ... 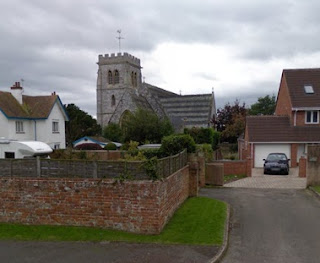 ... but now is a string of generally modern housing as here on St Johns Road. 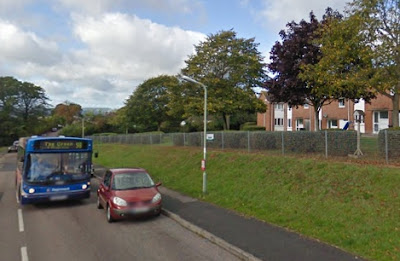 Buses then cut back to serve the hinterland of Littleham, on the opposite side of the Budleigh Road. This is mainly "council" housing dating from the 1950s. 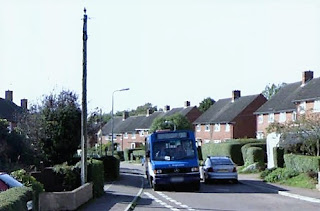 The current frequency seems generous at every twenty minutes ...

... too generous for the Stagecoach bean-counters so it gets the chop.

The frequency on the route will be reduced from every 20 minutes to every 30 minutes. Following customer feedback, one journey per hour will use a minibus, allowing it to continue to serve the current 98 route and maintain a regular service along Moorfield Road.

The second journey each hour will become the 98A and will use larger single deck buses to help maintain capacity, despite the reduced frequency. The size of these buses means they cannot use the current 98 route and will serve Withycombe Village Road instead. In Littleham, they will not serve Roseway but will run directly to The Green along Capel Lane and then extend to Rodney Close to provide a new service to this area. Connections will be provided onto routes 157 (from 98A) and 357 (from 98) at the Parade during the daytime, creating new through links to Rolle Street and Salterton Road / Cranford Avenue.

Yes, erm, thanks. Clear as mud if you are NOT a regular user of the 98 or lack a detailed cartographic knowledge of the environs of Exmouth. Without a map, the timetable is not much help to an outside or a potential user.

Will the added complication be a deterrent to travel? We old codgers are not too well equipped to cope with "clever" but confusing scheduling. But do not fret too much - it's a 99E in the evenings and on Sundays!

Whilst Stagecoach have done an EXCELLENT job on publicising these changes well in advance, the occasional user or, more importantly, the potential new user, really does need an updated map.

As we shall see, this concern applies to the big city change that we will examine tomorrow.

Next Exeter blog : Thursday 9th August
Posted by fatbusbloke at 02:00