One of fbb's lifelong ambitions has been to catch a bus to Throop; and he thought that, last Saturday, his joy would be unbounded as he planned a bus trip to that very place. 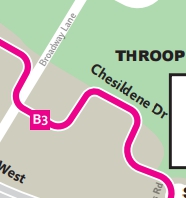 While Mrs fbb was deep in prayer and bible study at Bere Regis, settled in a lovely little Congregational chapel ... 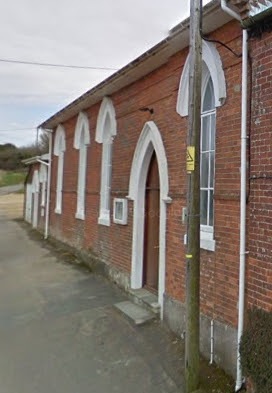 ... her dutiful hubby and driver for the day had hot-rodded it to Wood station to catch the 1045 to Bournemouth. The plan was to ride on three routes which took the buses a little off the "beaten track" from the busy frequent services. 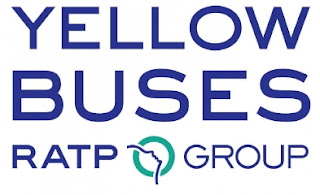 ... rejigged most of its core routes and gave them letters and names. The few remaining number-only services were lettered and named from May this year.

Whereas "R" routes run from R1 to R6, there is only one Dolphin Line, the D1. It looked a little out of the ordinary. fbb is unfamiliar with the history of Bournemouth's routes, but this offering looked very much like a glueing together of lots of little bits that didn't fit with the "main line" Bs, Ps, Rs and Vs.

It starts in Poole and wiggles to Bournemouth ... 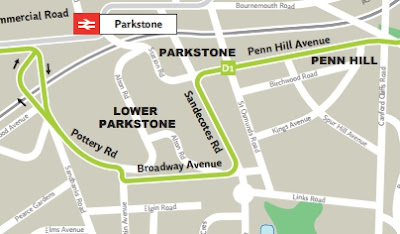 ... via Lower Parkstone and Penn Hill. 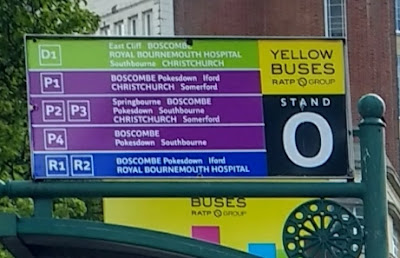 fbb joined at Bournemouth The Square, stop "O"; confirmed by a green label on the stop ... 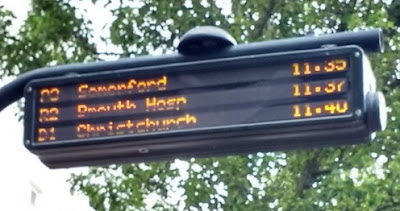 ...  and a departure shown on the electronic display. there was info in the frame on the shelter ... 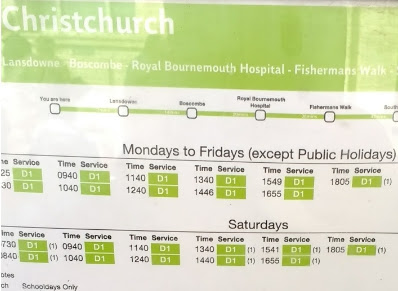 ... in the form of a comforting departure list in matching green. fbb was going all the way to Christchurch, so all was hunky dory.

Maybe not quite and hunky and dory as it should have been.

Note (1), unexplained on the departure list, means DOES NOT go the Christchurch! 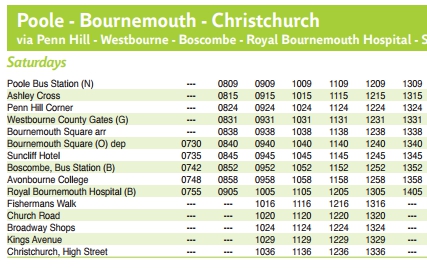 Which is why you really should put timetables up in bus stop frames and not departure lists with explanatory notes missing.  Fortunately fbb's 1040 departure did go all the way; and, as we come to expect with these things, at 1040 the departure disappeared from the electronic screen but no bus appeared.

It was ten minutes late. But the ride was fascinating. The first leg ran along East Cliff with splendid sea views to the right ... 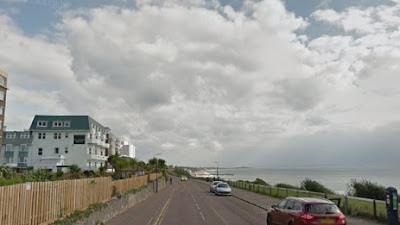 ... and splendid apartment blocks on the left. The route then turned inland and ran via the Littledown district of large houses with multiple cars, unlikely to provide huge number of passengers. 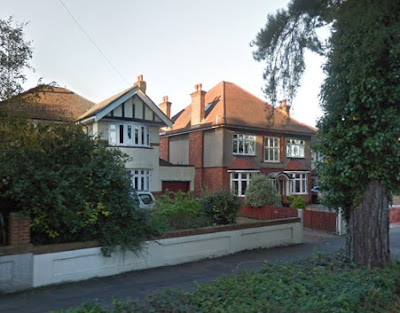 The Hospital is an important calling point, where no-one boarded or alighted as the bus effectively U-turned to go back south. 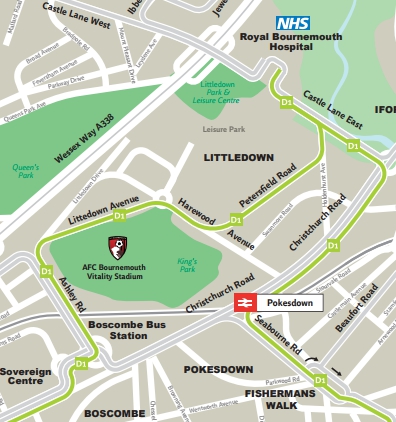 A left turn at Pokesdown Station ... 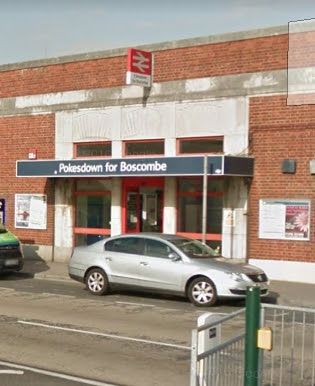 ... led towards Southbourne, passing near the head of Fishermans Walk ... 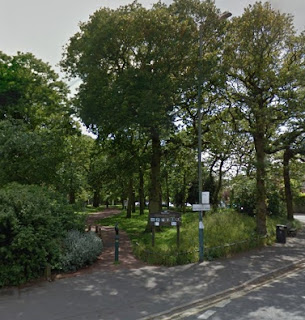 ... an attractive park that leads back through pleasant suburbia to the cliff top. From here a cliff lift will take you down to the beach. 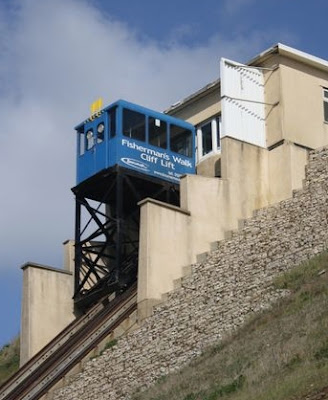 It was at Fishermans Walk that the monsoons arrived, such that fbb nearly missed this well known feature of the area. 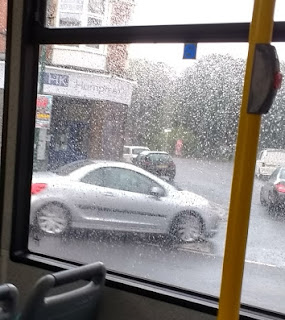 More glimpses of the sea at Belle View Road, Southbourne ... 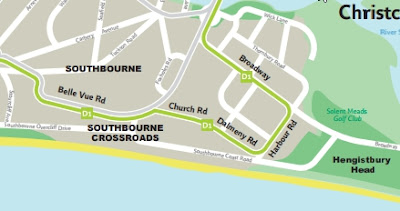 ... plus a close-ish encounter with Hengistbury Head, a rather splendid excrescence that is but a "short walk" from the D1. 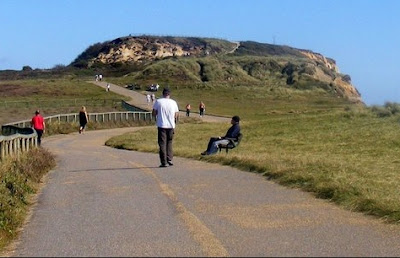 Alas, fbb's tight schedule did not allow him to avail himself of this particular delight. And so a turn northwards took the D1 into Christchurch itself. 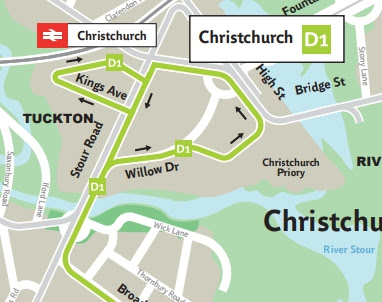 But not just yet! We first cross Tuckton Bridge (barely strong enough to carry fbb?) ... 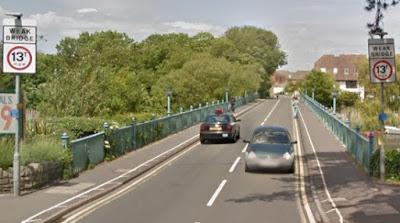 ... to travel north on Stour Road. 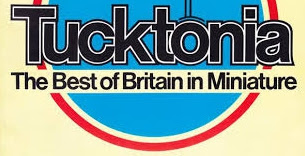 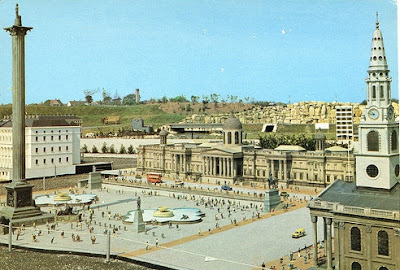 Tucktonia was a late 1970s theme park located on Stour Road, Christchurch, Dorset, England. It was officially opened on 23 May 1976 by Arthur Askey. 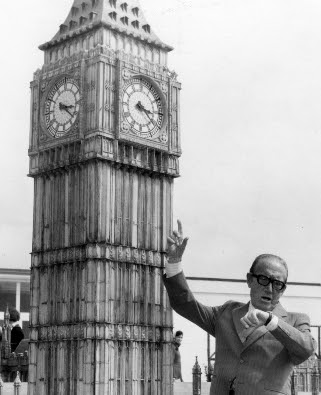 It originally occupied 4 acres of the 21-acre Tuckton Park Leisure Complex. The park was closed down in 1986. The site has since been redeveloped for residential use. (Tuckton Bridge upper right) 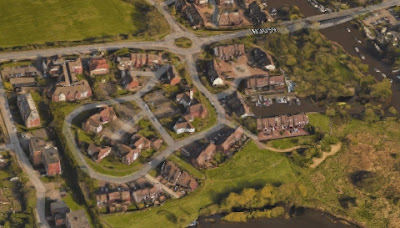 fbb went once and was very impressed with the spectacular models, mainly of London

Just within touching distance of Christchurch High Street our D1 looped via a bit of residential Tuckton, only to turn back south again before approaching Christchurch via Willow Drive with glimpses of the imposing Priory over the rooftop. 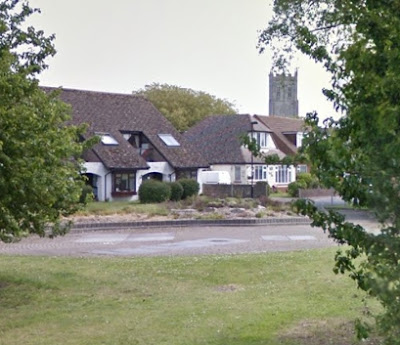 By now, our bus was nearly 20 minutes late; which left fbb with a big problem.

The story and the journeys continue tomorrow.

Next Throop blog : Thursday 14th September
Posted by fatbusbloke at 02:00