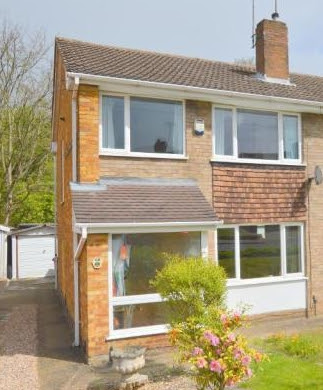 ... from 28 Sunningdale, a pleasant semi on a quiet suburban road with a well appointed interior. 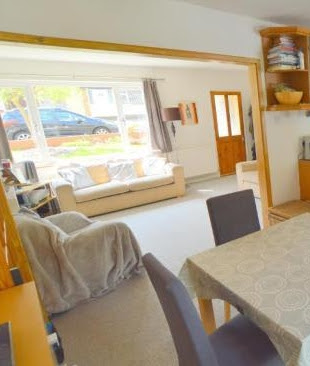 The fbbs have visited, some time ago now, for Linda's 30th Birthday. She is the daughter of good friends and Sheffield colleagues; in particular Mrs fbb and Linda's late mother shared in the upbringing of their joint six children.

If you are interested in the property, go to Right Move!

One thing that is rarely quoted in Estate Agents' honest and unexaggerated (?) descriptions of a property is the ease of access by public transport.

fbb can help here. The easiest route to the front door from, say, Luton Station is Arriva Service 14, as advertised in a recent leaflet. 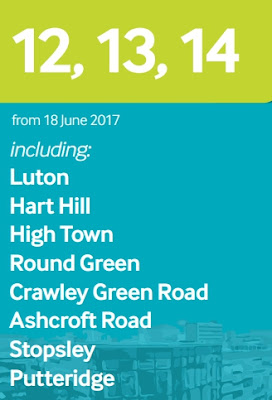 Arriving at Luton Station, you need to find your way out to Station Road. It is a bit confusing as the ticket office is on a footbridge which forms an "open" route across the station. 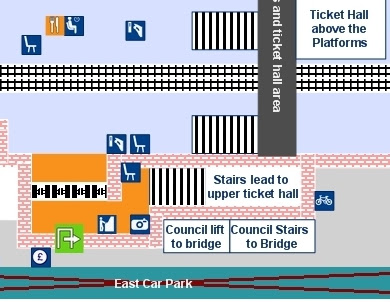 The National Rail station plan doesn't help things by showing the "East" car park on the west side of the station. But the exit we need IS on the east, but decidedly unimposing. 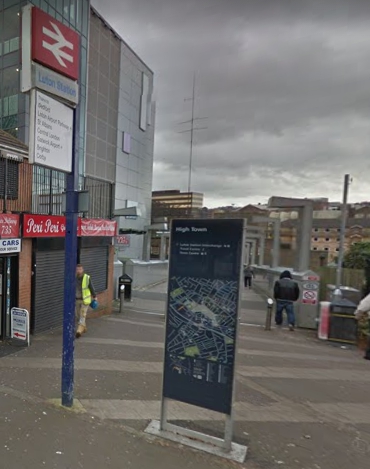 The poky entrance/exit itself is hidden behind the streetmap, but National Rail provides a picture of the luxury. 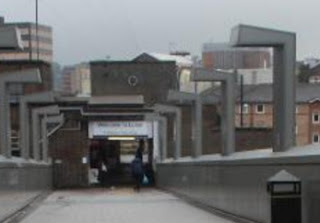 Turn left along Station Road and you will come to an equally unimposing bus stop with, unless it has improved since Google Streetview drove past, has absolutely no information whatsoever. 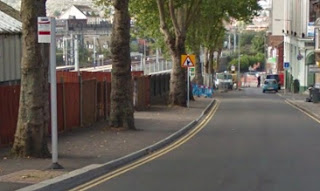 It doesn't even have a route number on the flag. 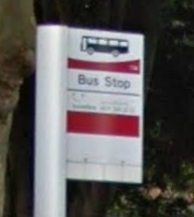 On the aforementioned bus leaflet, there is a helpful map. (click on the map and it should enlarge; it shows Sunningdale on the large terminal loop of service 14 in YELLOW) 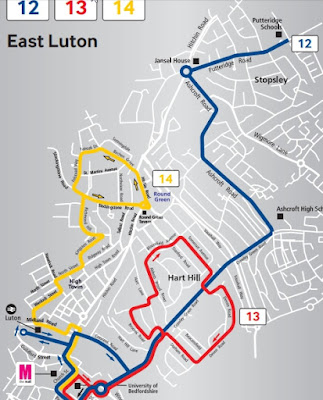 There are full timetables for all three services to East Luton and we immediately see that 14 is a real oddity. 12 runs every ten minutes and is BLUE on the map. 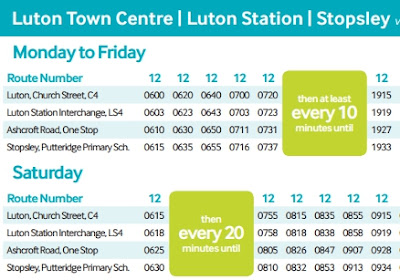 The service on Saturdays increases to every 15 minutes later in the day. The 13 RED runs every hour. 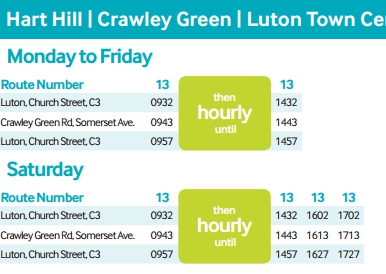 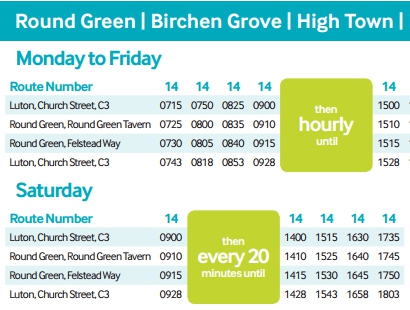 Every hour on Monday to Friday but every 20 minutes on Saturday; very unusual.

It is a mistake, innit? Arriva's web site timetable confirms the mistake; Saturday's frequency is hourly, the same as Monday to Friday.

But there is another mistake in terms of giving potential passengers the best possible information. Traveline journey planner gives a series different answers. 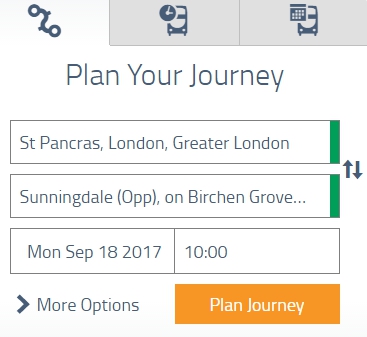 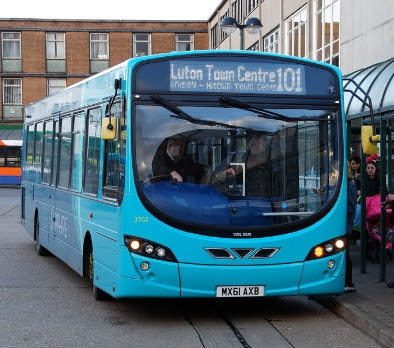 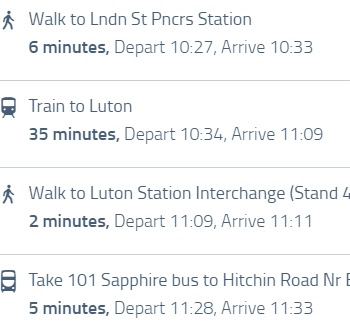 You are guided out of the west side of the station, to the "interchange" ... 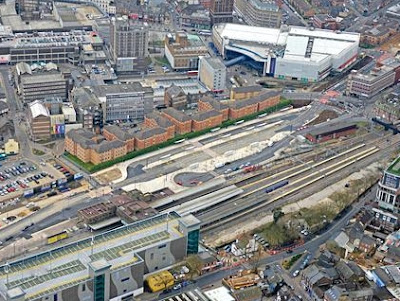 ... and on to Service 101 which runs along the main road (in  WHITE , running north/south on the Arriva colour map above) and drops you at the end of Birchen Grove near the other end of Sunningdale. 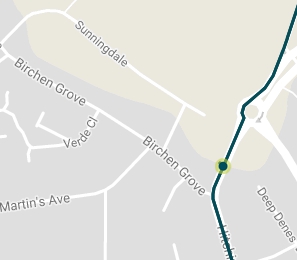 ... alternates with the 100 via Luton Airport rejoining the 101 after a suitable stop for Sunningdale. 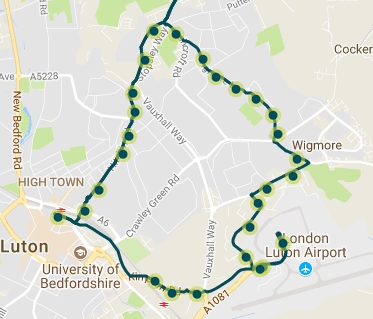 The 101 is a better service that the 14, so might be the route of choice, with journeys from early morning to late in the evening, even running hourly on Sundays when the 14 stays tightly snuggled in the depot.. 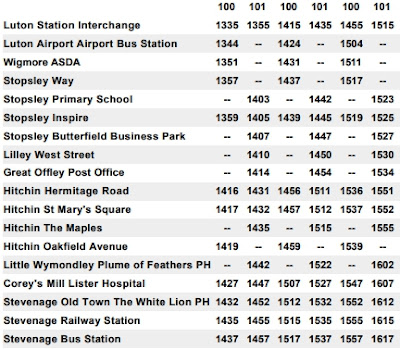 But, once you unravel Arriva's overly complex presentation, and once you dismiss the erroneous 20 minute Saturday frequency on the 14, Sunningdale is a pleasant place to live ... 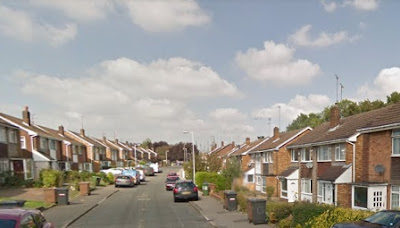 ... and surprisingly easy to get to by public transport.

Will it be Stagecoach Leaflets tomorrow? If the fbb's postal order packet of goodies arrives today, yes; if not, we are off to Derby.