Service Cuts - Or Service Enhancement?
It all depends on where you are. Certainly Ms Weber, whose complaints have featured in The Star articles, may have a point. Currently from her address in the Margate Drive Area ... 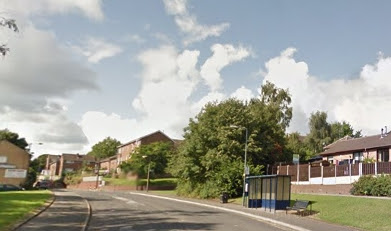 ... she has a half hourly bus service to City and to Meadowhell. Of course South Yorkshire PTE make it hard to follow because one hourly journey is a service 35, the other a service 70. Only one supplier of information makes the helpful effort of merging the two routes to show the (roughly) 30 minute frequency. 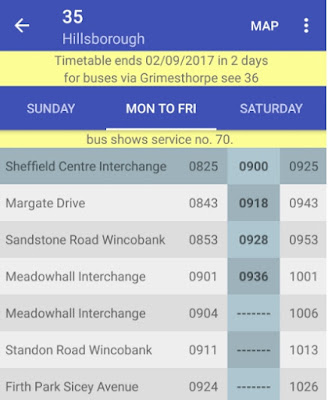 From next week, the 70 is withdrawn without replacement, leaving something very similar to the 35, but now numbered 36. The number 35 is, inexplicably, retained for a very different much altered service 35 elsewhere in the city. The unchanged 35 via Margate Drive is, therefore, renumbered, adding to confusion.

But further along the route, things are not quite to troublesome. 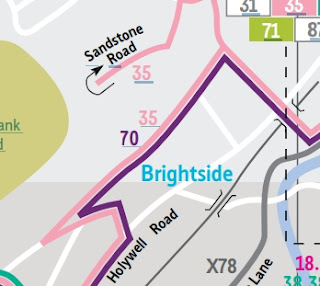 The new 36 doesn't go to Sandstone Road (Boo!) but something else does (a tentative Hooray?).

This is Wincobank Hill, as seen from Atterclffe in a somewhat over beautified engraving. 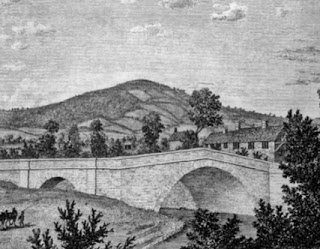 Jenkin Road climbs over the top. 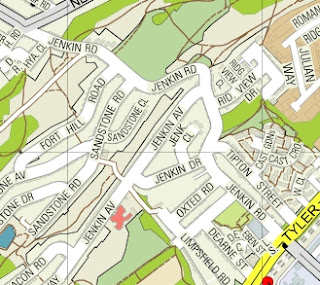 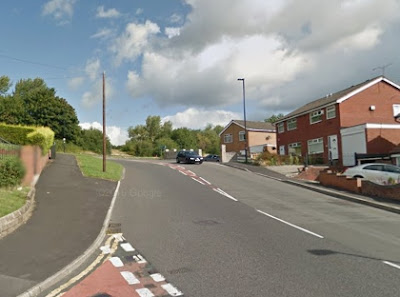 ... and assaults the steep hairpin bends of Jenkin Road; and they are steep! Short of the summit, the 35 turns left ...

... and along Sandstone Road to a little turning nibble opposite The Forum pub.

The disappearing 35 then returns to Jenkin Road, descends the mountain again to Brightside, once a thriving community, but now barely existing. 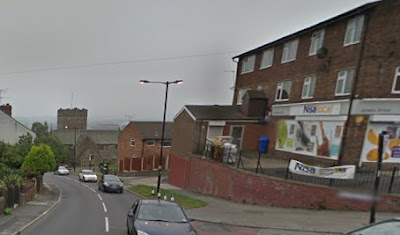 St Margaret's church no longer operates and has recently been a circus training school! The recreation ground, which once boasted a splendid lodge as a park keeper's residence ... 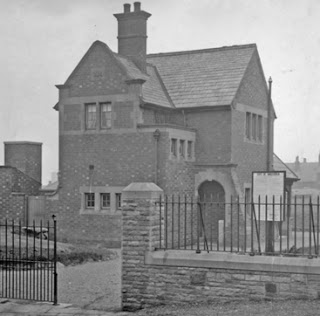 ... now only has the gateposts to remind us of grander days. 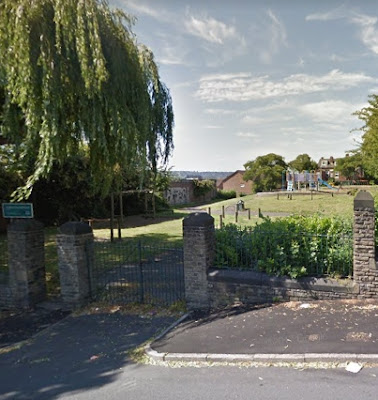 Thus it is that Sandstone Road has lost its hourly 35 BUT, approaching from the other side of the hill ... 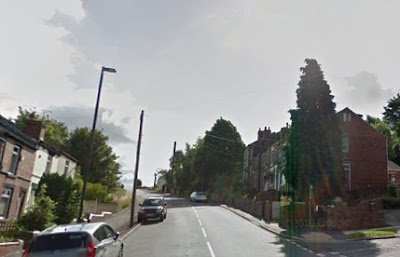 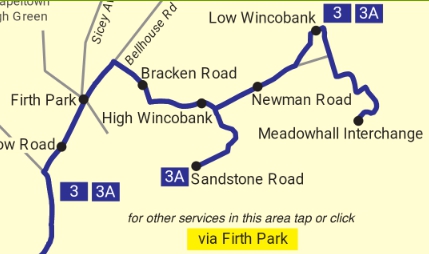 This links the tiny turnround to Firth Park, a large and vibrant (?) suburban shopping centre; to the main Norther General Hospital; to City and, in the other direction to Meadowhell. Since the 1970s, i.e. for most of its omnibological life, Sandstone Road has had a bus every hour.

So how often is the new 3A. Every two hours? NO!

Surely not every 30 minute? Of course not!

The new 3A runs EVERY TWENTY MINUTES. 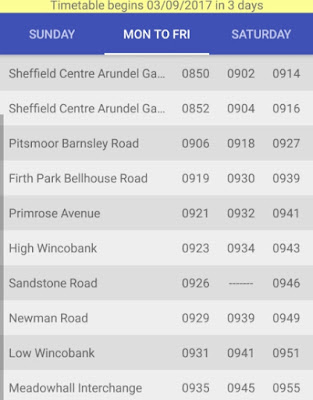 Such a frequency is nonsense, of course. Sandstone Road could never, in several route change lifetimes support three buses an hour - it can barely support one! But, as is often the way with transport planners (pause for a snigger or two), the running time on the service 3 was always generous, so the diversion costs just a dibble or two of diesel.

So Ms Weber has her service halved, and is decidedly miffed, whilst Sandstonians have an over-bussed and commercially totally unrealistic increase in their frequency. But the First Bus planners could do it, so they did!

But it does mean that First Bus can say that, whilst some services have been reduced to match demand, others have been improved. On the positive side (less negative side) there are footpaths between the hourly 35/36 and the 20 minute 3A. Easy if you don't mind the steps; easy i you don't mind the often vandalised street lamp. 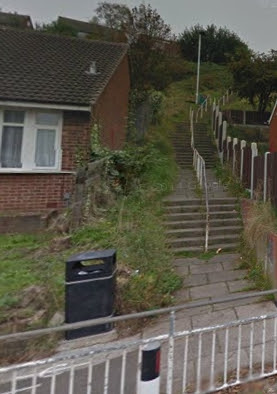 The steps run from Jenkin Avenue up to the Forum pub. Enjoy the climb!

Meanwhile the residents of Standon Road ... 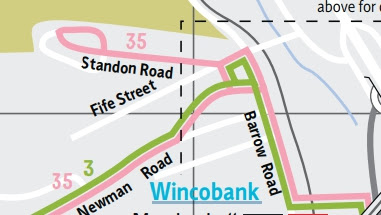 ... arguably a larger area of housing than Sandstone Road ... 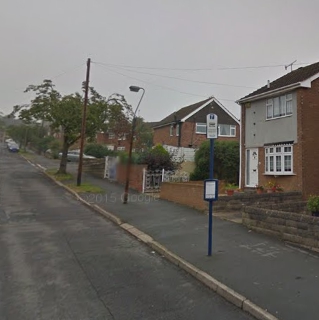 ... (and yes, the names are confusingly similar!) are stuck with just an hourly 36. Its predecessor, the current 35 (current until tomorrow) is also only hourly, but it does continue up Newman Road to Firth Park.

The new route doesn't, depriving folk of their link to a local shopping centre - which, of course, is where they often want to go!

For the historians amongst fbb's readership, Low Wincobank (at the bottom of Standon Road ... 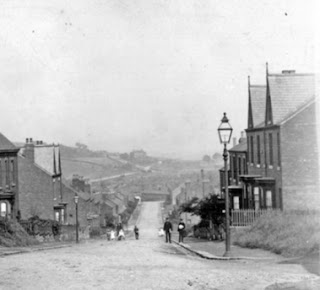 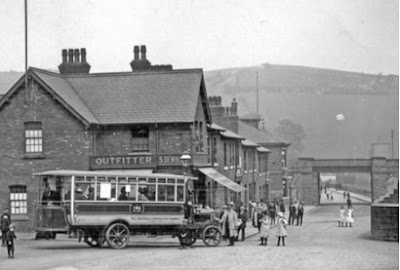 It was probably more frequent that today's 35 or Sunday's 36; but not as frequent as today's 3/3A running every ten minutes.

But, not to worry; fbb confidently predicts that in  few months (January 2018?) there will come an announcement that this pattern of service is not performing "up to expectations"; the 3A will be pulled out of Standon Road, the 36 will be disconnected from its full route to Kimberworth Park ... 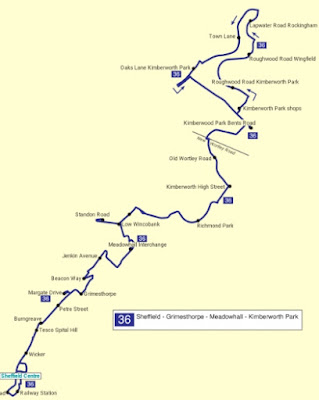 ... and a new route, say 37, will run up Jenkin Road and in to Standon Road, possibly continuing to Firth Park but running at a daft frequency, maybe every 43 minutes.

And fbb is NOT joking!

And how is publicity for these changes going? Here is a note received from Sheffield correspondent John. 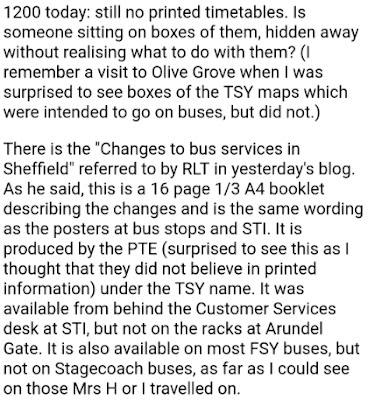 It isn't. No printed timetables had appeared by midday yesterday. Now wasn't fbb "helping" First Bus so that they could get their leaflets out at least a week before the changes? The old man's work was delivered on time, so ...

"Most" of First Bus' Sheffield leaflets were available from 1400 yesterday. 4 were "misplaced" at the printers' and will arrive early next week. No news, yet, of Stagecoach's offering.