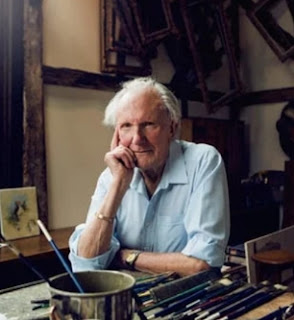 Although rightly admired for his wildlife paintings; his celebrated "A Very Wise Old Elephant" herewith ... 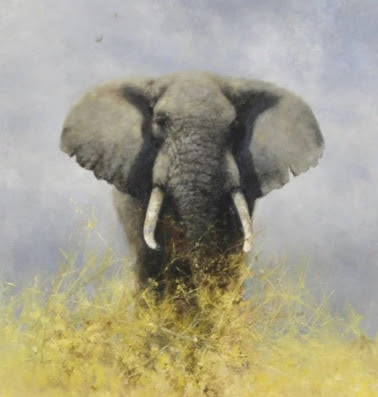 ... David was a superb recorder of the equally massive and powerful steam engine. His pictures are particularly evocative of the years of steam's decline. 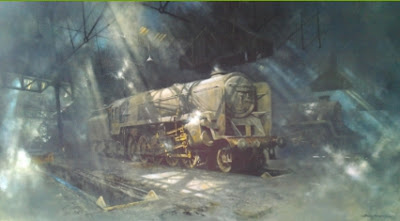 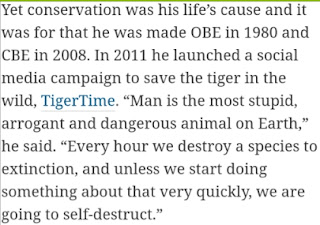 Conwy is a Unitary Authority in North Wales. 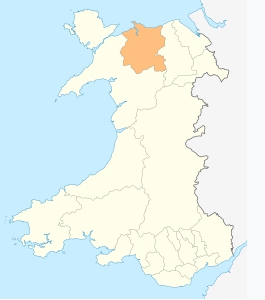 It contains the major settlements of Llandudno, Llandudno Junction, Llanrwst, Betws-y-Coed, Conwy, Colwyn Bay, Abergele, Penmaenmawr and Llanfairfechan, and has a total population of 115,000, the vast majority of which lives along the coast.

The River Conwy, after which the county borough is named, lies wholly within the area: rising in Snowdonia and flowing through Llanrwst and Trefriw en route to the Irish Sea by Conwy. The river here marks the border between the historic counties of Caernarfonshire and Denbighshire.

One third of the land area of the county borough lies in the Snowdonia national park, and the council appoint three of the 18 members of the Snowdonia National Park Authority. Its total area is 1,130 square km, making it slightly larger than Hong Kong.

Conway has, for many years produced an excellent timetable book. 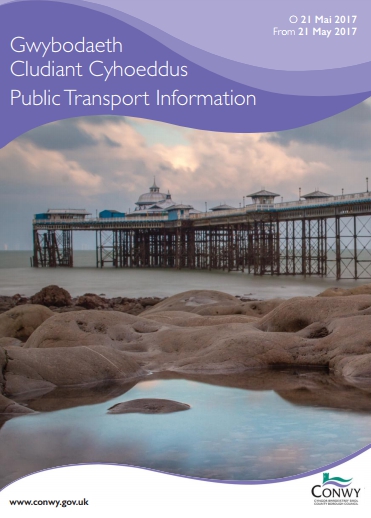 For regular readers the "what's changed" page is helpful ... 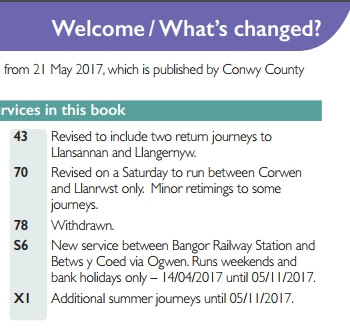 ... and there is a long list of "Places to Visit" There are details of "rover" tickets ... ... and a wondrous selection of maps. A diagram of main routes ... 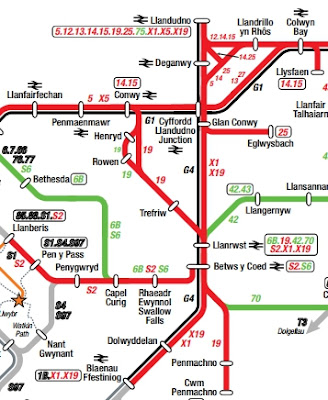 ... plus a geographical version with more detail. A particular joy is the profusion of town maps which cover all the built up areas in the Borough. Here is a chunk of Colwyn Bay ... 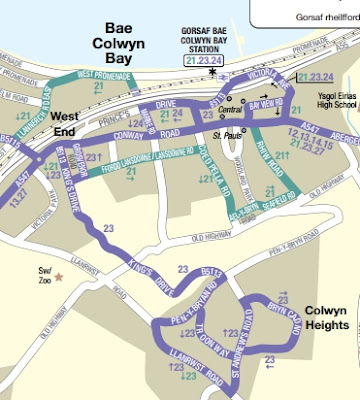 ... visited by your elderly author, then aged four. Despite the effluxion of time, fbb can still remember walking from Mrs Williams digs (the family had no car and travelled by train) via the Dingle ... 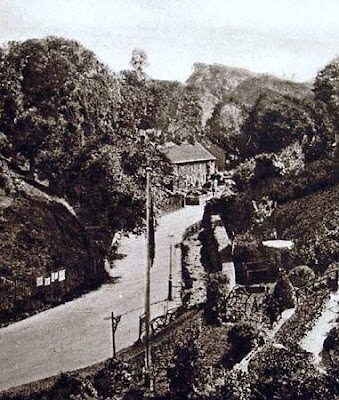 ... to the beach. Indeed fbb has a picture of self engaged in a long-term pebble re-arranging project observed by a doting mother. It is far to yuk-making to publish!

And, of course, the Conwy book is packed with excellently presented timetables 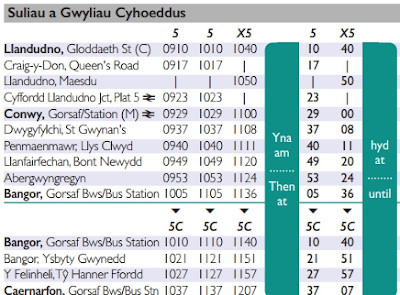 In all a wonderful production.

Most of the buses are operated by German State Railways in the cunning guise of Arriva. 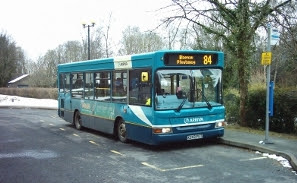 Furthermore, if we arrive by train at Llandudno Junction station, we will most likely come on a train also operated by Arriva. 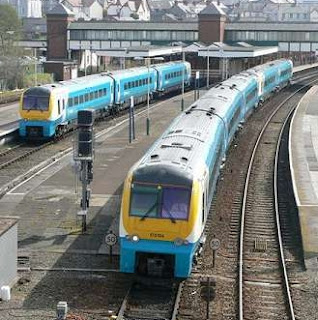 Yet again, if we leave the station and wander around a bit, we will come to a bus stop ... 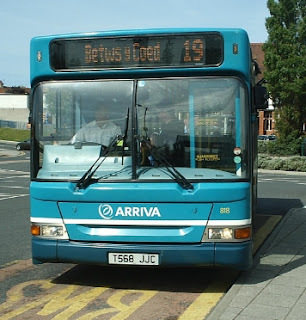 ... whence we could travel by one of those blue Arriva buses. And fbb does know that Arrivs no longer runs the 19; it is now in the hands of Llew Jones. 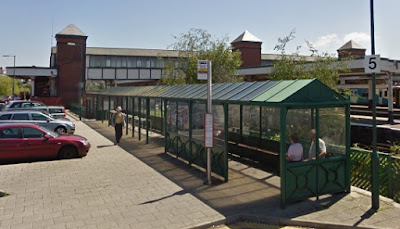 fbb is not sure, but thinks all that shelterage used to be for buses; but cycle parking is now more important than passenger sheltering. And look, dear reader, the bus stop is labelled 5 - that is "Platform 5" for buses. There are four platforms in the station proper.

That alone should convince us that here is a location where integrated transport rules O.K. Apparently, all the buses stop here ... 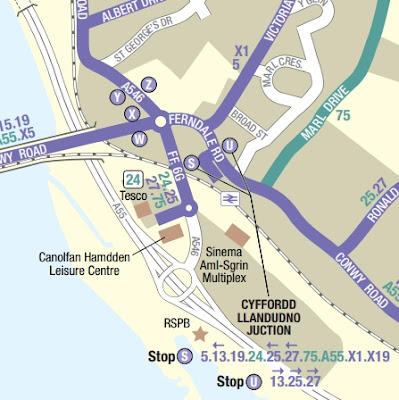 Not too bad as long as thee flag is clearly labelled "U". 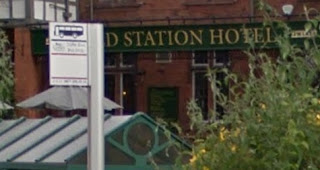 Oh dear; it isn't. Neither is the flag at Platform 5 adorned by an obvious letter "S". 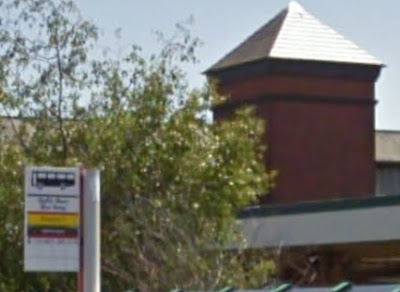 Never mind eh? This is an Arriva Station with Arriva buses stopping outside and there is an excellent bus timetable produced by the county, so all our correspondent Alan had to do was pop over the footbridge to the ticket office ... 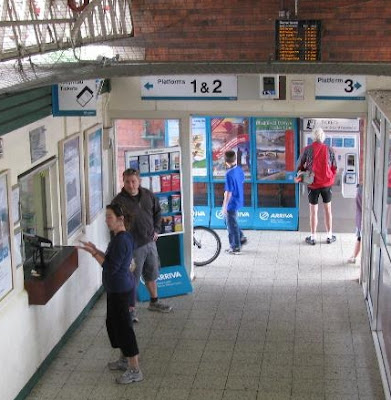 ... and pick up a full set of bus information.

Only there isn't any. Diddly squat. Not a single word or time given in the station for the buses that stop outside - ALTHOUGH THEY ARE RUN BY THE SAME COMPANY!

Historic Note : Arriva's bus depot was just around the corner. 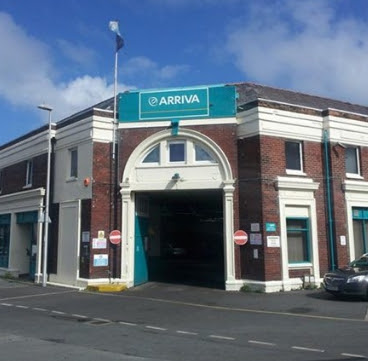 It closed in 2013. Has it yet been sold and/or demolished?

Despite the shiny label, there are now no signs to "Platform 5" from the station and the name does not appear in any bus timetable. Indeed, the provision of buses at the station is not quite what it seems. The map shows service 5 as calling at stop "S". Well it does ... 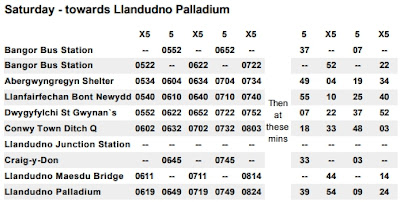 ... but not on Saturdays and only rarely on Mondays to Fridays.

You can interchange with rail from Service 5 southbound to and from Conwy station ... 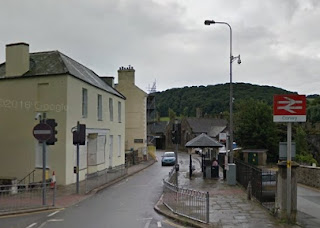 ... but northbound the stop is in Castle Street. 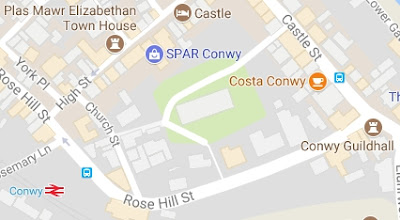 But if you miss your bus, you can enjoy refreshment in Costa Lot, opposite.

It appears that, back at Llandudno Junction, "Platform 5" is an jolly good idea that has faded completely due to lack of enthusiasm and/or commitment by the parties involved. There seems to be no heart for integration despite the infrastructure, the opportunities and the common ownership of many of the participants. An opportunity faded and an opportunity missed.