From Some Of The Papers

Yet again fbb is indebted to last Saturday's "Times" for a novel travel idea. Apparently there is a huge growth in the market for chartered jet plane travel. fbb was greatly inspired by this view of the inside of a Boeing Dreamliner ... 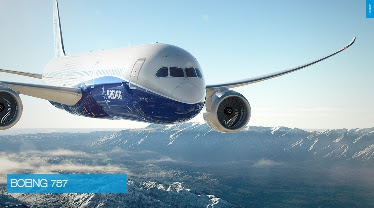 ... converted for a charter business. 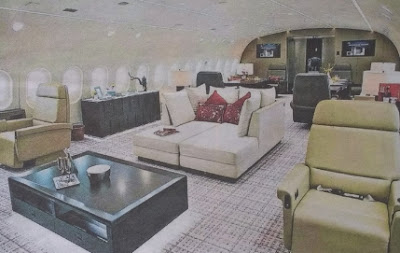 Nathanael said to him, "Can any good thing come out of Nazareth?" Philip said to him, "Come and see." An understandable reaction in John's Gospel to the news that the new and revolutionary preacher came from an insignificant and easily-forgettable town.

fbb remembers it as blackened by years of industrial grime, impressively grand from the outside but super-grim once through the classical portico. 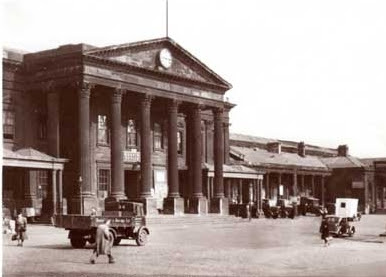 The front, and its associated square have been poshed up a bit - poshed up a lot - since then ... 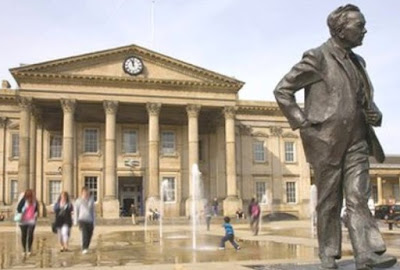 ... as Harold Wilson scuttles home after a busy few days in The House. The inside was once even grimmer and is hardly awe inspiring today. 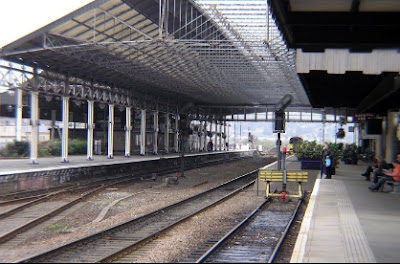 But one resident has hit the headlines. 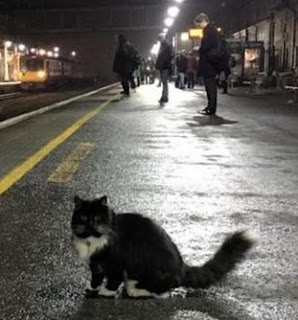 Say hello to Felix the Huddersfield Station cat! Here is  just a snippet of Felix's persona. 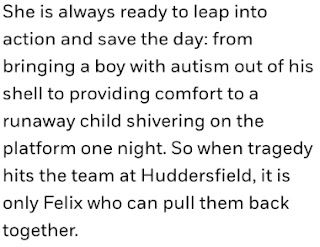 She (Felix) now has a best seller book written about her; telling of the way in which a humble cat has brought goodness and pleasure to the normally uninspiring platforms of the station. 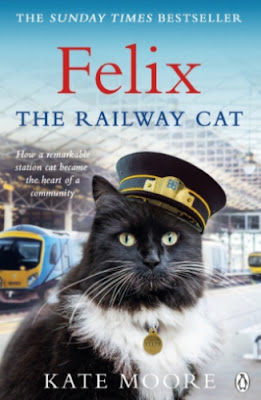 Jacko, owner of fbb mansions and employer of fbb and Mrs fbb, was unavailable for comment. 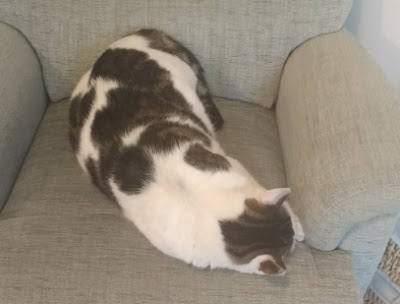 The Last Of The Breed
An event missed by many bus watchers took place back in July. The Post Bus route from Lairg to Tongue ceased operation. 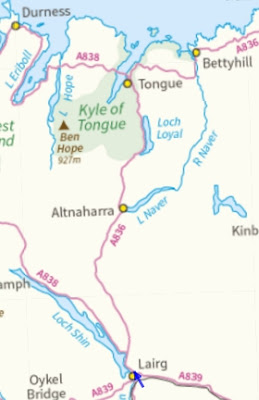 This was the last postbus to operate in the UK. You need to tun the map below through 90 degrees to match geography. 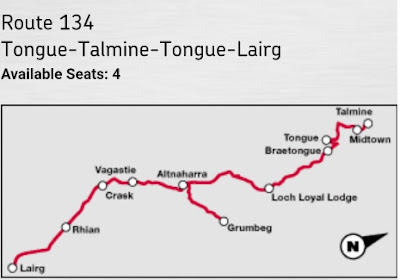 In the United Kingdom postbus services by Royal Mail began in 1967 to replace rapidly declining local bus and rail services in rural areas and provide a community service. In 2006 more than 200 services were operated by Royal Mail, often only once or twice a day but in some areas the only form of public transport available. Key areas include the Yorkshire Dales and South West Scotland.

Historically a number of services met trains at Lairg Station and conveyed both mail and people to the remoter regions of North West Scotland. 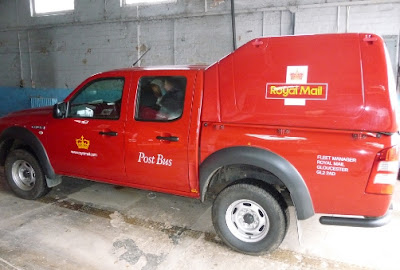 Because of their very nature, postbus routes were hard to "do". They tended to be one way in the morning followed by a long gap, then back again in the evening. Sometimes Saturday morning round trips were possible. fbb observed these delights at Aberfoyle and the batch below were meeting up at Killin. 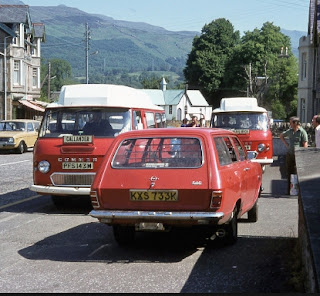 One successful ride, however, was on the Isle of Wight. Long before moving there and on a holiday with Mrs fbb and their young family, fbb rode from Newport Bus Station to Brighstone. 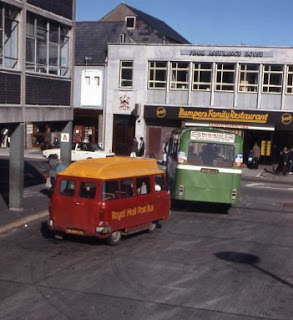 Mrs fbb then dove there to collect your exploratory blogger-to-be.

The other route went to Newtown. They replaced normal Southern Vectis routes of various vintages and were later replaced by normal routes; both of which have now disappeared completely. As an interesting titbit, English postbuses had yellow roofs; those in Scotland were white.

Setting Forth Across The Forth 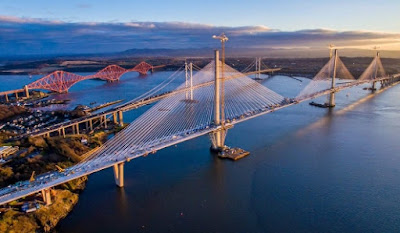 The Queensferry Crossing, the rather feeble name for the second Forth Road Bridge, opens for business today. Actually it was open for vehicles last week then closed again.

The first cars drove over the bridge shortly before 2am on Wednesday after traffic was diverted from the Forth Road Bridge. A long procession followed police vehicles, with many honking their horns and blowing whistles as they crossed the bridge.

However, by rush-hour drivers were facing long delays in both directions. It is thought people simply wanting to experience the crossing for the first time were exacerbating the problem, with Traffic Scotland tweeting: “This is not just commuters heading for work” and “LOTS of you eager to cross & 40mph speed limit in place.”

Over the weekend you could walk across ...

... a privilege never to be repeated as, from today, the bridge becomes a Motorway and has no public footway. 50,000 were chosen by ballot out of the 250,000 that applied!

The old Forth Bridge will be retained for Public Tranport.

Well Done The Lads!
As part of a recent "knees up" in Paignton, Stagecoach intended to display its "spare" service 122 open topper. But it was involved in a bit of a prang bringing the real possibility that it and its accoutrements would not be able to appear.

But the Stagecoach South West team are made of sterner stuff as reported in the company newsletter. 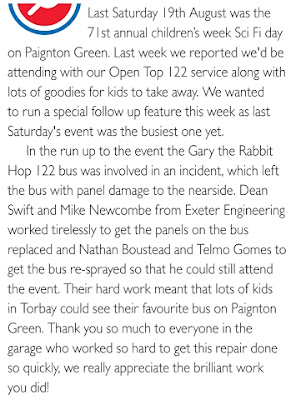 So all was well and the day was a huge success. It's really good to see extra effort being made for an entirely non-commercial event. (Maybe all good PR is always "commercial", but you know what fbb means!) 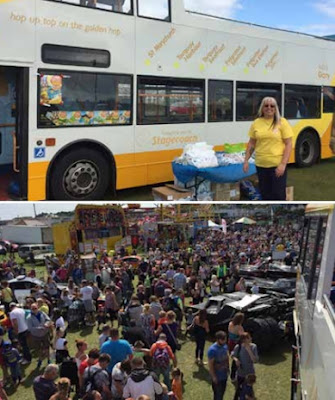 Dégustation Superbe
Northampton correspondent Alan enjoys a sausage roll now and again and we bus watchers are well aware of the need to sustain the inner man on long trips. Alan was impressed with news from Morrisons as reported by the local paper. 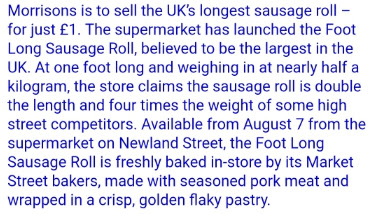 It certainly looks impressive, even if the photographer's lens has been chosen to make the snack look eeeenormous! 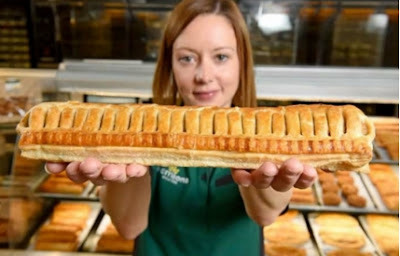 fbb, however, is not such a keen sausage roller (too much roll, not enough sausage); he prefers a small quiche, preferably from Marks and Spencer ... 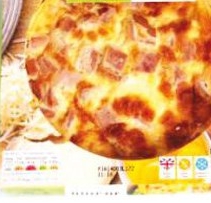 ... but the Co-op alternative is nearly as good.

Possibly off to Barnsley tomorrow - it all depends ...