In a blog published on February 5th (read again) fbb owned up to wanting to own a model of Ryan. 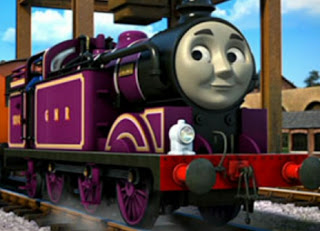 The purple beauty is one of the lesser known characters from a recent Thomas the Tank Engine story, but two things attracted fbb to the idea of making a model. Firstly the real loco on which Ryan is based (Great Northern Railway and London North Eastern Railway N2) has been around as an OO model in various guises since fbb was bouncing on his mother's knee. (1948 - What an awful thought!)

But as your author was idly scanning the on-line world for N2 models, he came across this:- 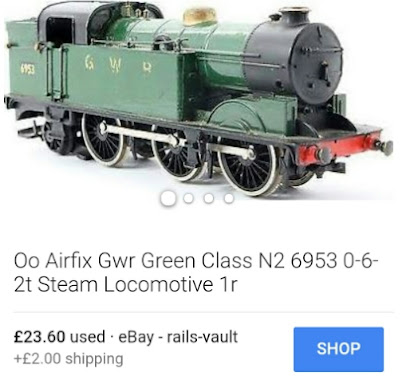 Some philistine had painted it in Great Western colours, complete with brass dome and copper rim to the funnel; the front coupling was missing; and the large condenser pipe from tank to smokebox was also gone from the off side.

The observant reader will note that the rear pony truck has been screwed on upside down. And the advert's illustration showed the nearside front footsteps missing as well. In all it was a mess and far too risky to buy; it might not even work. But, by today's standards it was ludicrously cheap.

It turns out that the "rails-vault" as shown on the sales panel above is none other than "Rails of Sheffield." 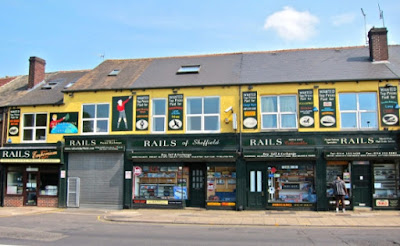 This impressive emporium is located at "Heeley Bottom", not too far from the site of Heeley railway station. 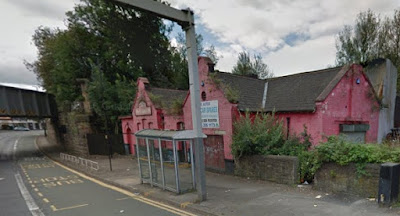 Also of note is the shipping charge of £2, half that applied by Hattons, fbb's supplier of choice.

So fbb bought it!

And when it arrived it was, indeed, as awful as the on-line snaps had shown. Could fbb make an reasonable effort to restore the model? The purple livery will be fun; GNR and LNER engines were green or black!

Sheffield Secret Service Again
On Mothers Day and/or Mothering Sunday there are timetable changes for four bus services in the Sheffield Area.

The 218 (Sheffield to Bakewell : T M Travel) has a seasonal frequency uplift on Sundays from hourly to every half hour. 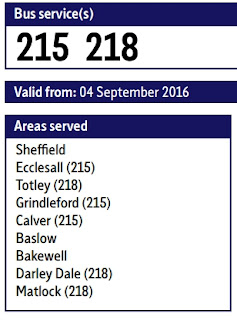 273, 274 and 275 also have small but significant changes for the "Summer". More buses run to Derwent Dams as 273, helpfully not mentioned on the header. 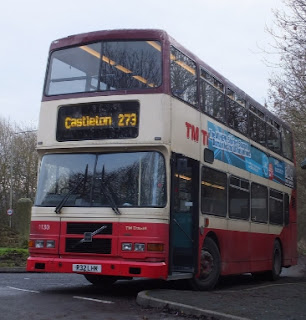 There hasn't been a sudden influx of residents but the area ...

... is popular with walkers.

Because of the significance of these seasonal changes, you might expect Travel South Yorkshire to tell you about them.

Fat chance! Go on-line and this is what you find:-

There will be some bus service changes in South Yorkshire on Saturday 29 and Sunday 30 2017. Services that are changing will be shown in the list below along with links to the new timetables on Friday 7 April 2017. 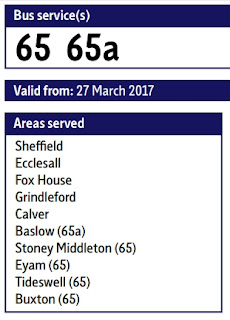 ... which has no change of timetable from 26th/27th March. Pedantically the 65a does change seasonally ... 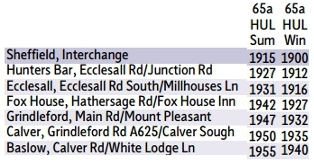 So why won't TSY tell you? The answer is daft but simple. TSY is proud of its "sustainable" information systems, where "sustainable" means "created by a mindless computer". Because the Summer variations are already included in the non-leaflets from September and October last year, the daft system says that nothing has changed. 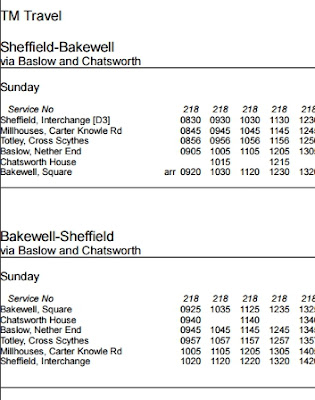 GoTimetable Sheffield is showing both. 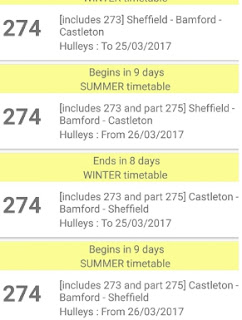 As you would expect. Neither of the TSY non-leaflets is particularly user-friendly with Summer and Winter schedules all mixed up on the same tables.

Yesterday was a big day for Okehampton. 500 good folks had booked seats on a Charter Train from the ton to London, the first through train t the Big Smoke for 50 years. It was all part of the on-going campaign to re-open the line between Exeter, Okehampton and Plymouth.

All was well as the happy campaigners set off at 0745. But things did not go according to plan.

Here is the headline on the BBC News web site ... 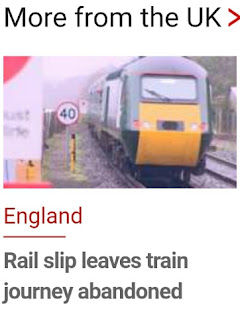 ... and here is how the story continue. 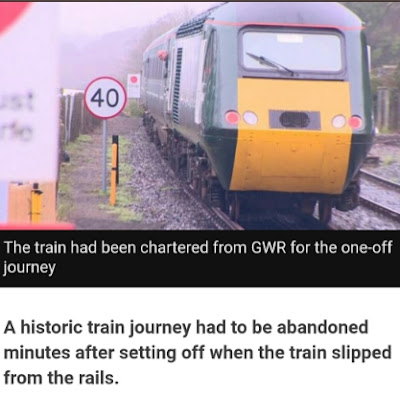 "Slipped from the rails"??? This is the UK's leading broadcaster, respected for its independence and accurate reporting all over the world. Beyond belief.

As the morning progressed others joined in the farrago of false news. 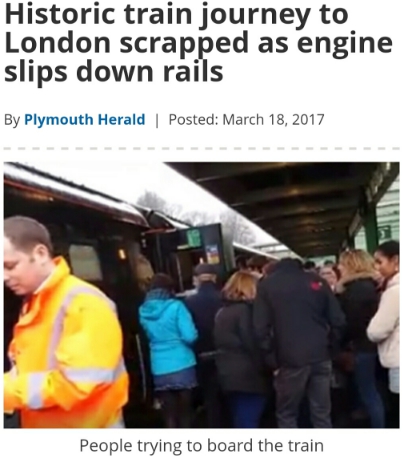 "Engine slips down rails"? People trying to board the train??

By the time Cornwall Live ...

... had picketdup the baton of quality journalism, things were a little better.

"Slipping on the rails" is more like it. But the train was hardly "scrapped". Passengers were transferred to another train at Exeter. 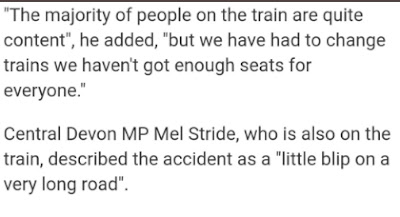 The return trip was scheduled on a replacement HST.

So what did happen? The little-used rails between Exeter and Okehampton were greasy and dirty. The wheels of the HST slipped.

When we had steam engines the brakes consisted of metal shoes that pressed hard on the wheel rims. 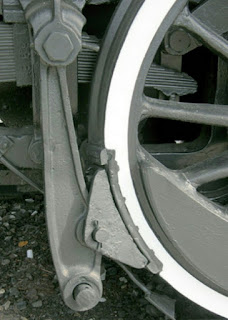 This was a very effective means of keeping the wheels clean and thus mitigating the effect of dirty track. An HST (High Speed Train) has disc brakes more like a modern car ... 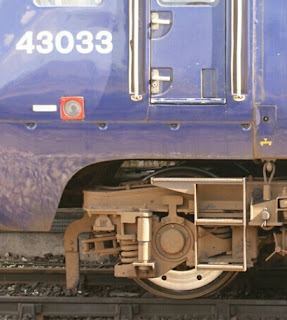 ... offering no scouring of the wheel rims.

So as the OkeRail train chuntered towards Exeter, the wheels slipped on the gunge; and when modern train's wheels slip thy slip uncontrollably wearing a "flat" on the otherwise smooth wheel. The resultant uneven running can damage wheel, track and bogie.

Hence the need to transfer to another train at Exeter.

Disappointing for OkeRail but by no means as disaster as the reports seemed to imply. More worrying is why Notwork Rail did not foresee the problems and send a rail cleaning train up the branch in advance of the trip. 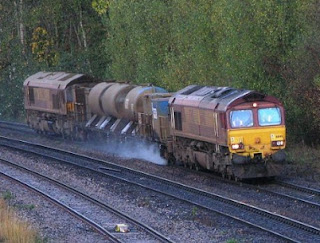 And Where Is It?
This picture appears on one of the many Sheffield Forums. The writer seeks to identify the location. 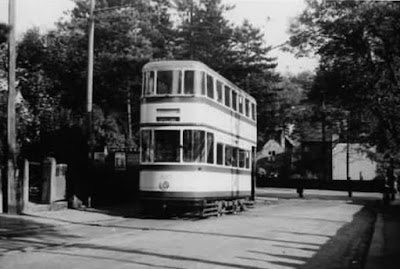 Spotted immediately by fbb because it is next to the church he and the family attended. The road is Canterbury Avenue, off Fulwood Road, the terminus of trams from City via Hunters Bar. The church is off-shot to the right. 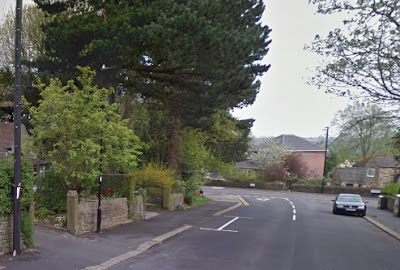 Clues from Steetview today are the telegraph pole, the streetlamp and the buildings straight ahead. Behind the tram and hidden tastefully in the trees was the tram drivers' (and public) "gents". This had an important ecclesiastical significance for Christ Church Fulwood, opposite. 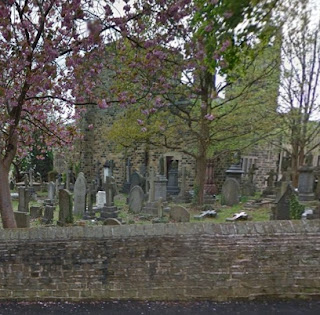 Until the church was extended in the 70s, it had no toilet. Visiting preachers requiring a "check-wee" were dispatched down the road to the gloomy "facilities"; a fearful expedition in the dark!

Passengers waiting for a tram might have been shocked or amused to meet a fully robed bishop nipping smartly in and out of the undergrowth! Alas, the experience is now no longer available as the toilets are closed.