Weston in The Good (?) Old Days

The Weston, Clevedon and Portishead Railway. If your geography is not your best subject, start at Bristol and travel west. Weston Super Mud is the grey splodge at the bottom left of the above map.

The current railway station at Weston is shown bottom left and the GWR "loop" line meets the main line just off the map extract on the right. The single track line just to the north is the Weston, Clevedon and Portishead Light Railway.

Building of the railway began in 1887 but due to various legal and financial problems, progress was very slow, and the time limit of the Act expired requiring further Acts to be passed on 25 July 1890 and December 1891. Due to these delays some of the track had to be re-laid before the line opened because sleepers had rotted. The section between Weston and Clevedon finally opened on 1 December 1897.

The track along the Boulevard in Weston-super-Mare was taken up before the line opened due to complaints from the council.

Thus the line has its terminus at the Junction of Milton Road and Ashcombe Road in Weston. Here is a historic view looking the other way ... 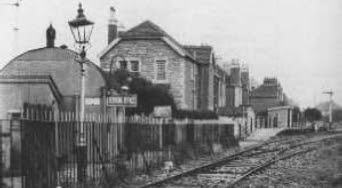 ... and today, from the former trackbed, the substantial property (the comany's offices) can still be seen. 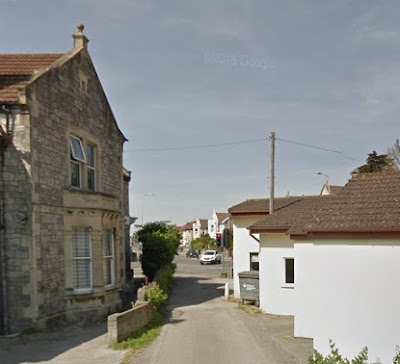 Lots of the former line exist at this end of the route, mostly footpaths and private driveways. Here is the crossing of Ewart Road ... 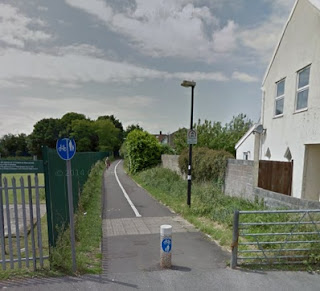 ... and a few yards further on we cross Baytree Road. 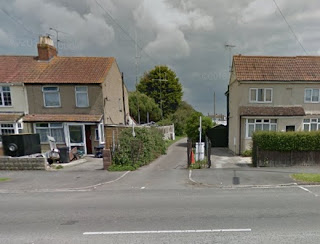 This was near the site of the lavishly appointed Milton Road Halt.

In fact most of the Halts we equipped with a simple hut and, where the line crossed roads, nothing as wonderful as a set of crossing gates.

The extension to Portishead had been planned from the beginning, but financial constraints delayed its construction. It required another Act of Parliament, which was passed in August 1899, There were many objections to the proposed extension, one of which was that the line was to run through the streets in Clevedon. 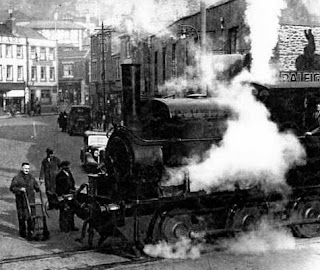 These objections were overcome, but a man with a flag had to lead trains across the street at 4 mph. This "man with flags" was a recreation for a BBC documentary, but we can see a train chugging out from the track with the posh building in the background. 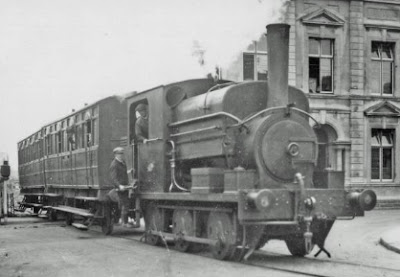 At Clevedon, the line offered connections with the GWR branch into the town. 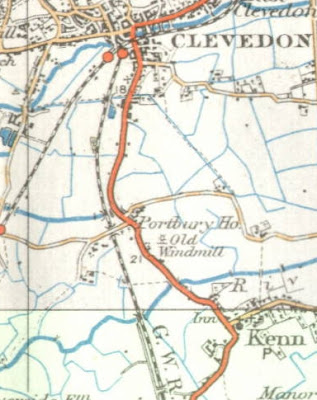 The extension to Portishead was built as a light railway and opened on 7 August 1907.

To get to its interchange station with the GWR branch there, trains had to use a archway through the White Horse pub! The pub and its arch are still intact, although the "tunnel" is now blocked. 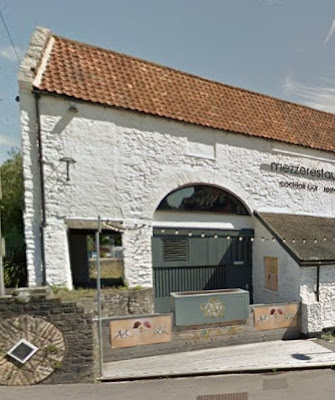 Cue for a song!

As sung (not quite) by Alma Cogan. 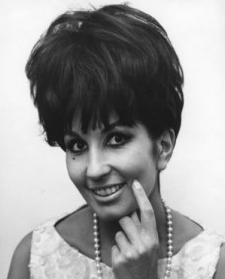 But, compared with the rest of the line, Portishead station was the lap of luxury, as here at the time of opening. 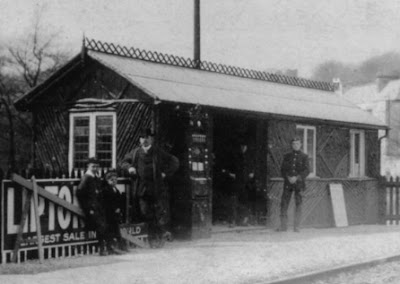 The finances of the railway were always precarious becoming serious by 1905. It entered receivership in 1909 and was in decline up to the outbreak of World War II, not helped by the increase in road traffic. It had relied on the transport of stone from the Black Rock quarries and the decline in this business made things worse. The railway spent 31 of its 43 years in the hands of receivers.

The line closed in 1940. First Bus X5 is  the modern replacement. 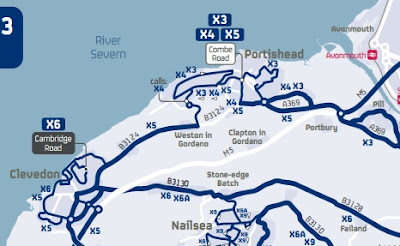 It runs via the M5 between Weston and Clevedon, follows "ordinary" roads to Portishead, the rejoins the M5 to take happy shoppers and happy workers to the delights (?) of Cribbs Causeway shopping, Patchway and Bristol Parkway station.

The bus is probably quicker than the train was!


Next miscellaneous blog : Saturday 18th March
Posted by fatbusbloke at 02:00