Mystery Solved but More from Meyzieu
When fbb was viewing the street adjacent to the "rhône express" depot, he was confused. 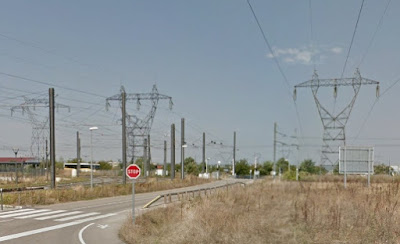 On the right, out of shot, was the depot, straight ahead was the "main line" running off right to the airport and TGV station but there was another set of track on the left. Looking from the depot gates there was a Lyon tram (of bulbous front end fame) parked in a field. 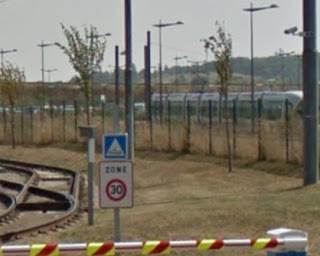 It turned out that this was a station called Meyzieu Les Panettes ... 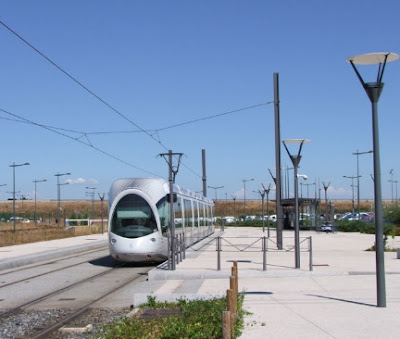 .... served on Mondays to Fridays only.

On Mondays to Fridays it is a Park and Ride stop with additional use for events at the "Stade Olympique" when a total of 4,500 places are available. 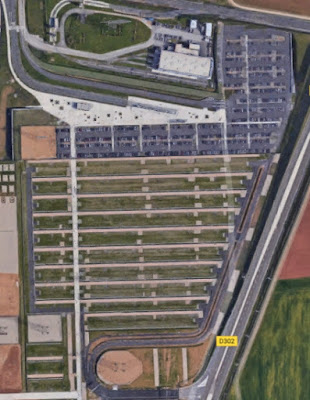 Yes, we get the point. But where is the stadium?

Answer, take the tram back towards Lyon from Meyzieu and you will spot the stadium and the junctions to a special tram station opened for events only. 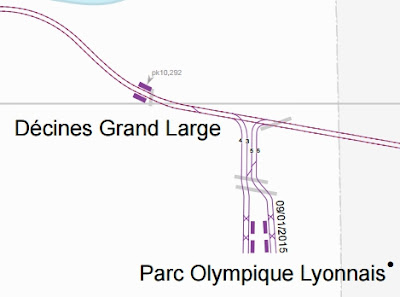 Although there is a single crosssover connecting them, the trams usually run two separate and independent services in addition to the "normal" schedule. There are shuttles from Lyon (left) and from the aforementioned park and ride at Meyzieu (right).

And they are well used.

Here is a view of the double station under construction ... 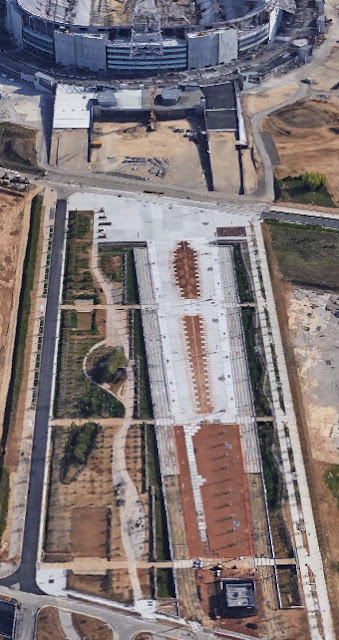 ... looking from the north back towards the stadium.

Impressive in the extreme.

And one last delight from T3 which takes us back to the Zone Industriel tram station. There is a connecting bus linking the tram with some of the main Industrial sites. 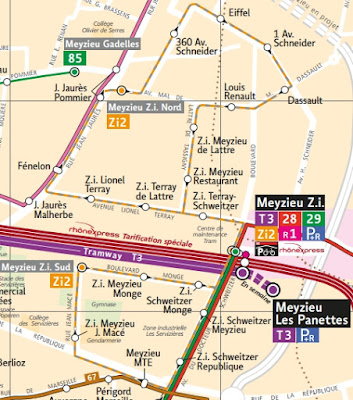 "Zi" is a sort of brand, used for a whole collection of similar services to "Zones Industriels" throughout Lyon.

There is only the Zi2 at Meyzieu. 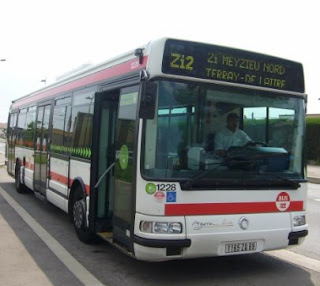 Buses run a figure-of-eight loop with the tram station at the intersection. 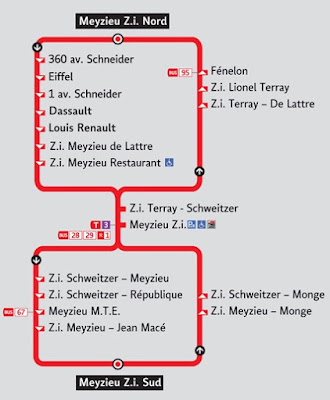 the timetable offers journeys at morning and evening peaks plus lunchtimes as follows.

Once again we recognise that all this transport joy comes at a price. The fares are cheap (except on the "rhône express" to the airport!!) and the service is good because it is a highly subsidised system set up under a political will to make public transport part of a holistic environmental and social philosophy. But, of course, taxation is high!

Yet again, "you pays your money and you makes your choice." 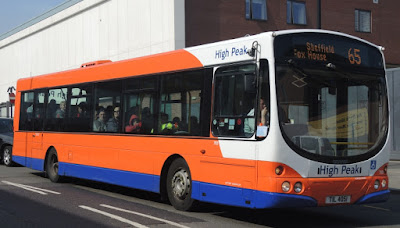 It could be that fbb was "a bit previous" in extolling the virtues of the "excellent" leaflet jointly produced by High Peak and T M Travel for joint operation on service 85, Sheffield to Buxton (read again). 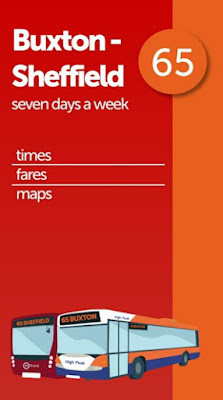 Sheffield correspondent Roy reports that passengers have been complaining that "there has been no publicity" and it is alleged that folk have been letting the High Peak bus pass by whilst expecting a T M Travel vehicle. High Peak have taken over two return trips between Buxton and Sheffield. 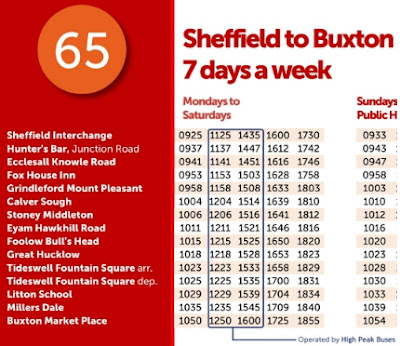 To add to the problem, another Sheffield researcher (John), who keeps an eye on leaflets (or lack of them) in the two Sheffield enquiry offices (where you are advised not to enquire!), reports that no route 65 leaflets were available earlier this week,

This follows the pattern, now well established, that if leaflets are ever produced they we only ever be obtainable AFTER the service has changed.

The leaflet can be accessed via the T M Travel ...