Not Rushing to Flushing [3]

Back in the "good old days", the suffix letter A added to a route number meant that buses showing the "A" were very similar to the un-suffixed route but a minority of passengers may need to take careto get th correct bus for the "minor" diversion..

Our friendly 69 and 69A are very different once that have traversed the old hill, to the north of Falmouth town centre, and called at Penryn.

Indeed the web site "timetables" section shows an additional 69B which is (a) very different again, and ... 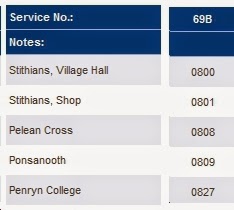 ... (b) has minimal affinity with its "parental" schooldays variant by serving Penryn College; otherwise a totally different route! There is no sign of this beastie in the new timetable book pages.

The long lost principle that the route number should define the roads served and the destination name should indicate where along that route the bus will terminate is a lost cause in today's information not-so-super highway.

Thus it is that the 69 and 69A serve very different markets at their outer ends. 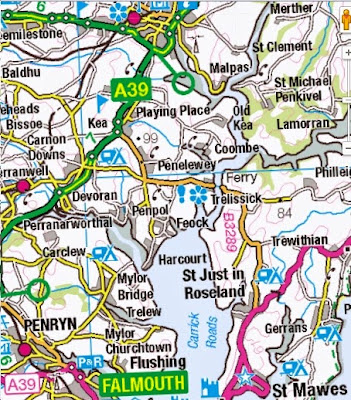 Geographically, Falmouth and St Mawes guard the entrance to Carrick Roads, a huge natural harbour. The Falmouth River is still navigable at high tides by smaller boats as far as Truro and the Roads is/are famous as a parking place for laid-up vessels. 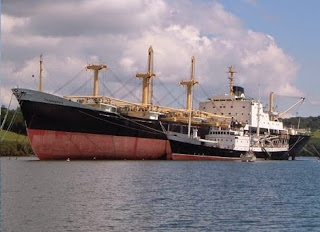 But all these creeks and inlets make for a difficult area for bus routes; made more challenging commercially in recent years by the explosion in second homes and holiday lets. 40 years ago, 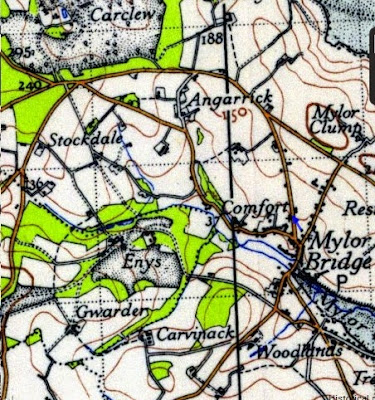 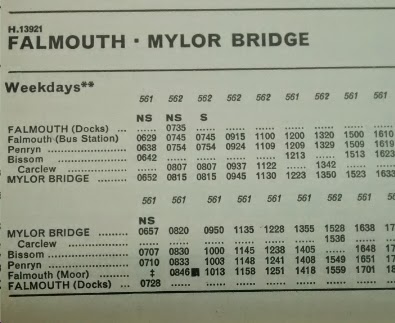 Todays 69 also loops, but via Flushing, and with no indication by number as to which way round it goes. 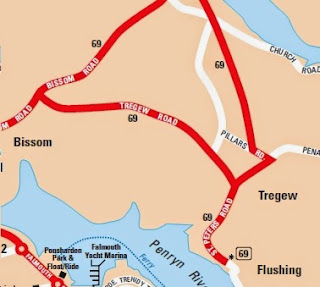 In 1974, Carclew residents could, of course, go the "long way round" via Mylor Bridge, but thy needed to look at the bottom half of the timetable to seek their ultimate destination. Now they have to walk!** It is perhaps for this both-ways- roundreason that the current 69 journeys are shown as a "circular",spilling over to a second page and stretching the table and credibility!

Mylor Bridge is a pleasant village whose main street, Lemon Hill, leads down to yet another inlet ... 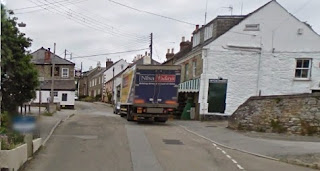 ... whereas Flushing, once providing homes for wealthy sea-captains, is the larger settlement but with the bus at one extremity and the ferry to Falmouth at the other, linked by long narrow (and unserved by bus) waterside streets. 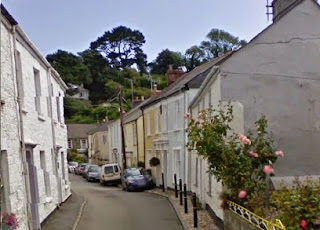 fbb is hoping that a comment writer will explain what buses ran to Flushing (if any?) in the 1970s; it was not a Western National destination. fbb's higgerance is disappointing.

Service 69A runs to Mabe Burnthouse ... 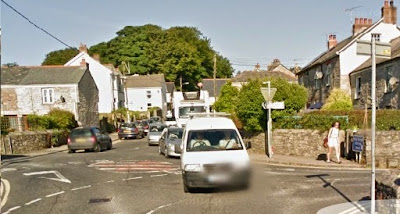 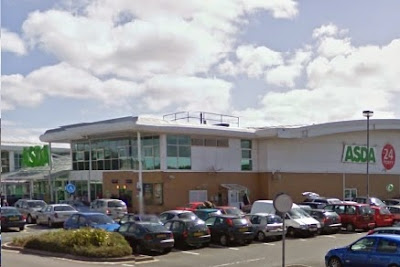 Of course, it also links the Old Hill area of Falmouth with this exciting superstore (?).

Oddly, as you will see from the map extract, it duplicates service 2 and, less helpfully, leaves Falmouth at similar times, although return timings are better spaced. 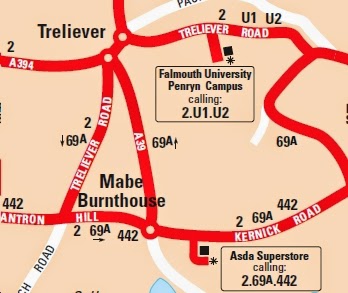 It's exclusive market is serving the unnamed wiggle to the right of the above map. The wiggle is (or are?) Greenwood Road and Green Lane, newer housing "over the hill" at Penryn. 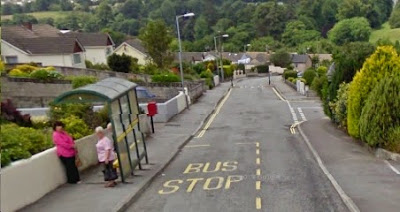 Falmouth University at Penryn (ancient settlement of Tremough) is in the Parish of Mabe but the origin of the name Mabe Burnthouse is "obscure".

From a "public service" point of view we have two routes (69 and 69A) which serve a mixture of four markets. But is it really necessary to present this information in such a user-unfriendly way?

Of course not. fbb will bravely (after his bog-up with the 56) offer an alternative in tomorrow's blog.

And, talking of First's 56, competition arrives from AtoB Newquay Travel ... 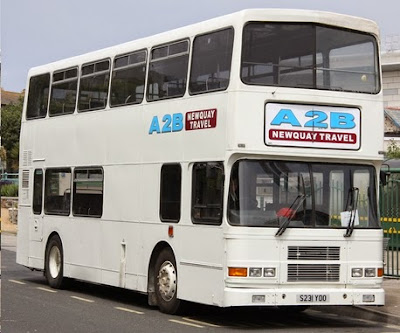 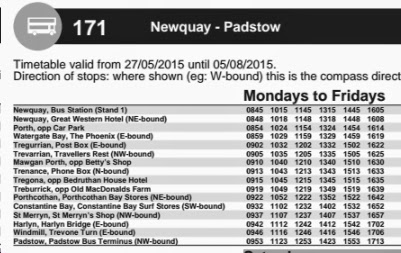 Oh, look. A nice simple timetable with no shading, no notes and no seasonal variatons to bemuse Joe Public. Given a choice, fbb would plan to use the 171; less likely for the old man to get it wrong.

** For the pedantic, Carclew (blink and you will miss it) is served by the Monday to Friday shoppers bus (route 66) between St Gluvias and Truro. 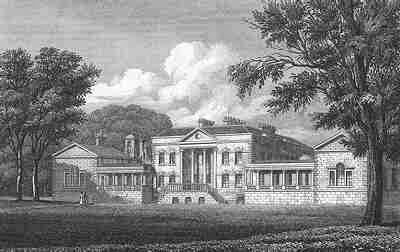 Carclew House, one of Britain's lost houses, was a large Palladian county house near Mylor Bridge in Cornwall, United Kingdom. The House was rebuilt in the 18th century and again in the early 19th century but was destroyed by fire in 1934.

The owners of Carclew were the Lemon family; hence Lemon Hill and The Lemon Arms in Mylor Bridge. But not Miss Felicity Lemon, secretary to Hecule Poirot! 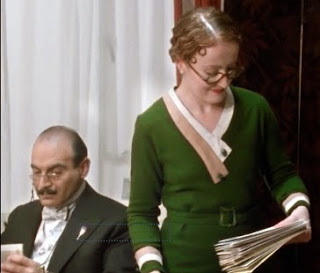