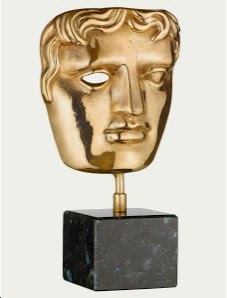 This prestigious award, designed by Mitzi Cunliffe to emphasise the one-eyed confusion of a typcally befuddled bus user, is awarded by the Council of BAFTA  (The Bus Advisors Farcical Timetable Awards) to the worst presentation of a piece of Public Transport information.

This year's award is for the presentation of ex Western Greyhound service 556/557 ... 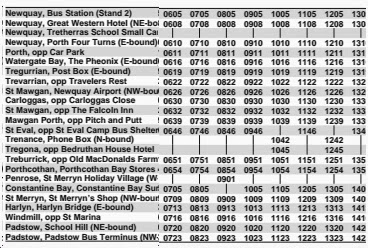 ... now numbered 56 from 24th May. It is for a route that links Newquay and Padstow. 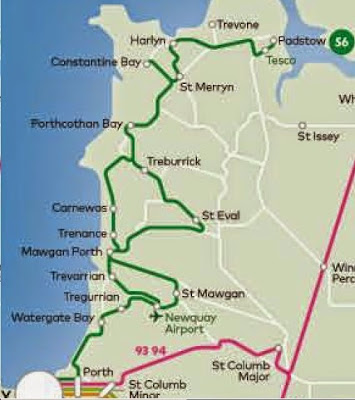 In fact it is two quite distinct routes with common sections. One runs via St Mawgan, St Eval and Treburrick numbered 56 whilst the other serves Trevarrion, Trenanoe and Carnewas and, to help the visitor, is numbered 56. The two legs used to have different numbers, even after First took over, but, to make matters more confusing, First decided to use only one.

Let's now look at the timetable in detail. Here's half of it ... 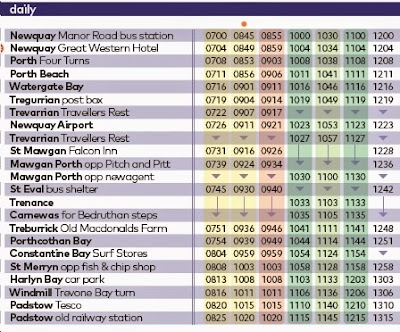 ... and here's the rest. The 1200 departure from Newquay is repeated as a point of reference. 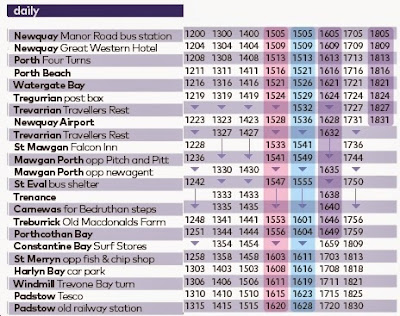 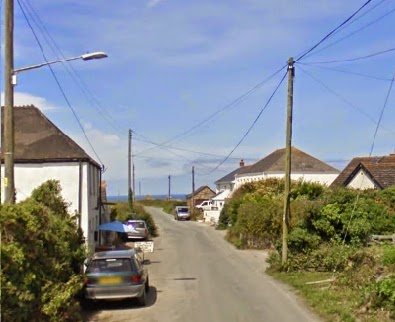 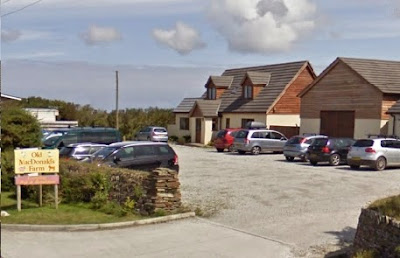 Its all very straighforward.

Anyway, back to the timetable. It has 14 journeys of which 10 are non standard. The oddities are shaded according to days of operation. 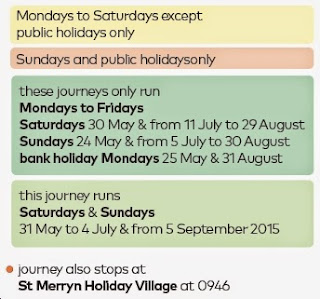 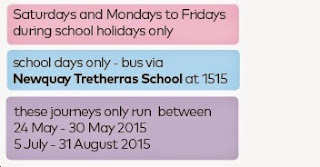 And don't forget the orange dot! Note also the distinctive shades of green used for three different dated services and the ease with which pale red and pale purple can be differentiated. This really is unsatisfactory for a partially sighted person; even fbb finds the colours difficult in certain lighting conditions.

Even if the colours worked (which they don't) the complications of the timetable are beyond the intellectual abilities of even the most experienced omnibologist. First Bus have been challenged about this and their response is feeble. "We need to save space to get everything into our new network timetable book."

Tosh. Or at least partial tosh. The ludicrously complex timetable needs two pages (⅓ A4) for each direction; one for timetable and one for notes. So how about two timetable pages with the notes alongside? Still two pages each way but less mess! (click on timetable to enlarge it) 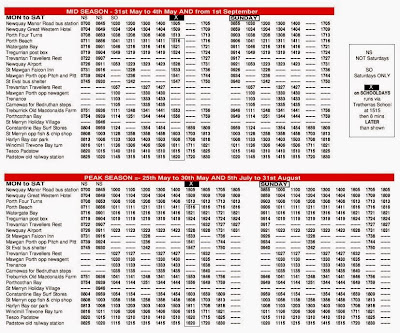 And we have even got rid of the orange dot!

Or, even better, print the timetable book on A5 pages, then the service will fit neatly on one page for each direction.

Or, even more betterer, redesign the timetable to remove some of the mess at source. Be a lot less mean and run the whole enhanced timetable from May 24th to the end of August. Financially things would, perhaps, be a bit grim for five weeks in June but a simple presentation might actually attract a few extra customers. Now that would be a bit revolutionary for First.

And while you are at it, First, let's have two route numbers and two colours on the route map. Then the extra potential passengers might, as an added bonus, be able to work out where they are going.

Now, dear reader, of you are still awake (possibly) and if you have followed all this (unlikely) turn to Traveline and you will find ... 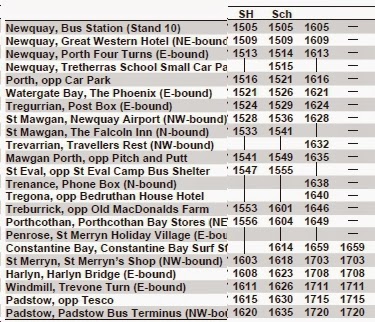 Time for those tranquilisers again. 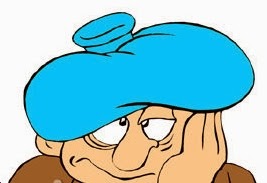 There is more Cornwall to consider; but we take a break tomorrow to say goodbye to yet another failed bus company, not too far from fbb mansions.