But Not Any More

We are so captivated by the Parisian Métro (?) that we forget (if we ever knew!) that the city had a very extensive conventional tram network which reached its peak coverage in the 1920s. Here, for example, is part of the route diagram showing the mass of services at Châtelet. 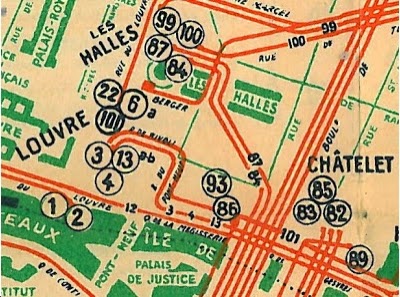 Networks spread out past the boundary marked by the old city walls and into neughbouring communities as shown here with a plan of the Porte de Vincennes terminal point. 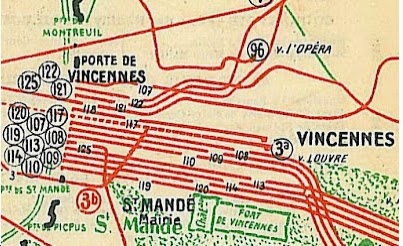 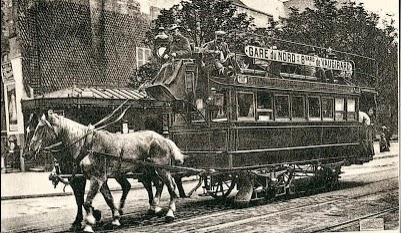 ... followed by some weird and wonderful varitaions on tram technology. 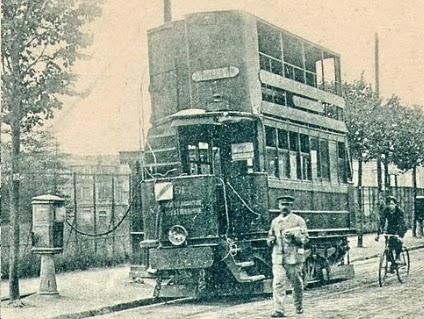 ... including battery power, shown above at a charging point. Milton Keynes electric bus, York park and ride, you are not so "new technology".

But all city trams had gone by the late 1930s, leaving the bus to rule supreme above ground. In the suburbs a few routes hung on until the 1950s. 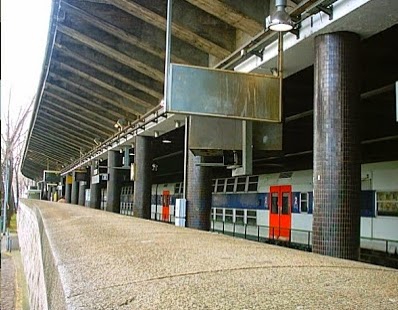 This would convey your chubby blogger and his chum to Pont du Garigliano (opened 1966 replacing an earlier structure) ... 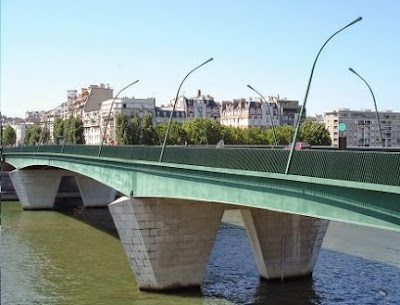 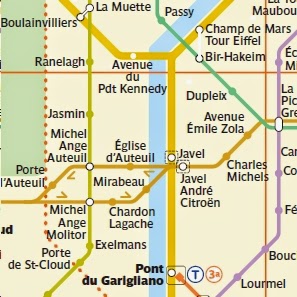 Tram T3 (without "a" or "b" opened in 2006 between Pont de Garigliano (in the south west) and Porte d'Ivry. The line was substantially extended and opened fully in December 2012 running over half way round the original city walls to terminate at Porte d'Asnières (in the north). It replaces the "Petit Ceinture" bus service, the remnants of which link the two ends of tram to complete a full circle. 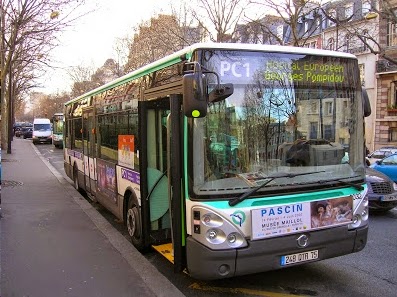 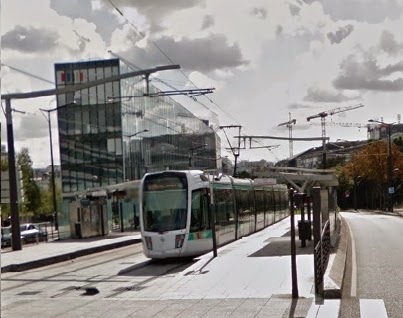 ... and prepared to enjoy a long ride with an obligatory change half way round.

A brief diversion was taken to the end of Métro line 8 ... 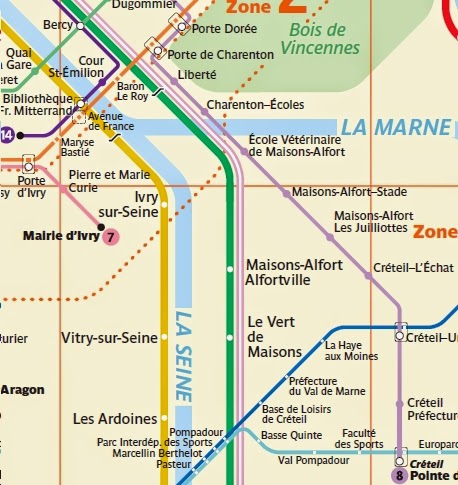 ... one of the most recent extensions. 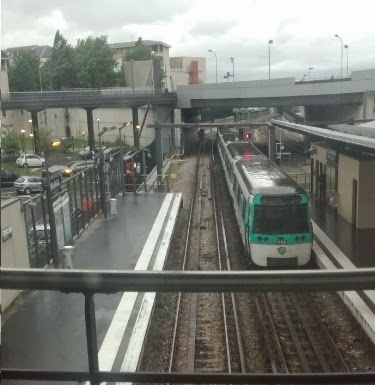 Another exciting station and train (?).

The Tram also parallels the long-abandonned "Petit Ceinture" railway with a disused bridge ... 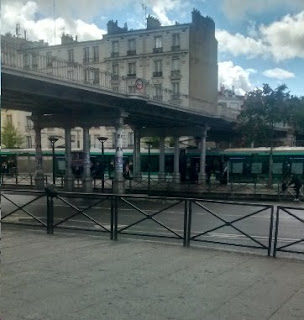 ... being evident at the changeover from 3a to 3b. 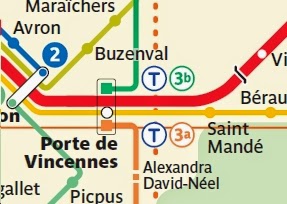 The route map is too big to blog, so readers will need to imagine the bits in the middle. A more extensive assessment of line 3 and the old railway will form the basis of a future blog. The other diversion from Tram 3b (the green line) was via the Métro's shortest line; but that, too will have to wait. 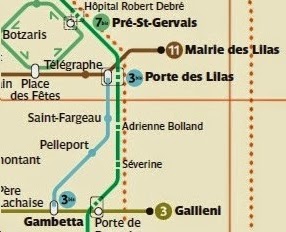 We must hurry across to Bobigny via Métro line 5 (click to enlarge map) ... 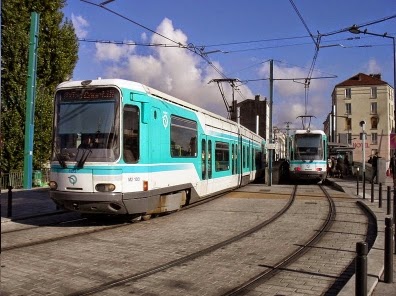 ... and what an experience! It runs for 10 miles across the north of the city, it has 36 stops and runs every 5 to 6 minutes and the trams are FULL! At most stops there are about 2 million people to get on; fortunately another 2 million to get of. Yes, it was an experience. The line also passes through some desolate and deprived areas.

End to end, fbb spent a wearisome hour-and-a-bit in the company of many of Paris' less favoured souls. Yes, it was an experience.

And it was  followed by another experience. 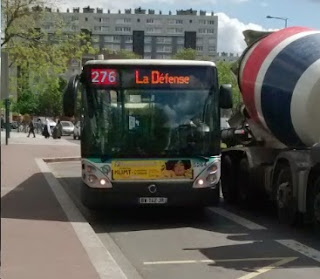 fbb had hoped that there might be a bus from the end of tiring tram 1 to La Défense where the last tram of the day would be joined, viz. Tram 2. Buses outside of the City are less evident on line so this was indeed a guess. Bus 276 is probably better thought of as a works bus serving the industrial estates and port area of  Gennevilliers and Colombes. 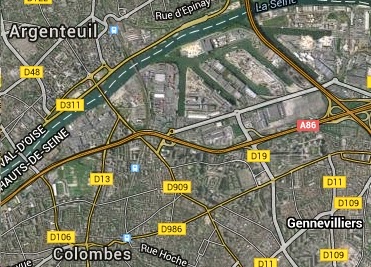 It is sufficiently infrequent to have a proper timetable, almost.

After Valmy it runs non stop, pedal to the metal (and everything you have read about Paris drivers was true of ours!!!) along dual carriageways ... 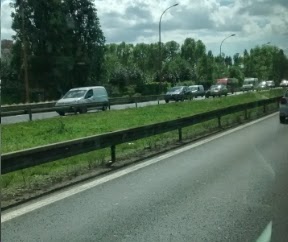 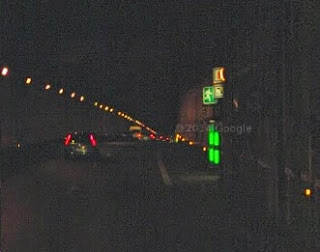 ... to a terminus in the Hades-like underworld of the Shopping Centre. 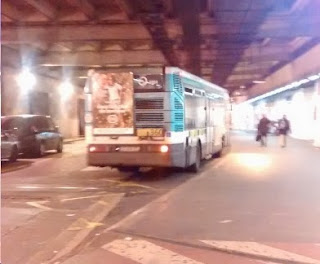 Much more SCARY than having armed guards outside the hotel.

Tramway 2 is completely different from 1. 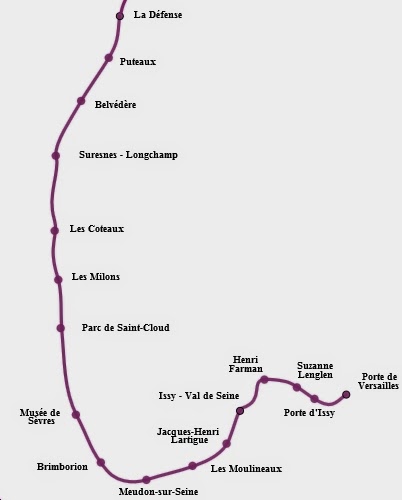 It is of a similar length and similar frequency but has "double length" trams in comparison. It passes through more "settled" suburbs and is almost rural at one point. It starts from alongside the RER platforms at La Défense ... 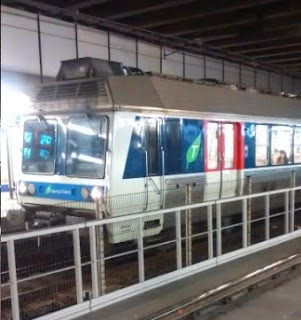 ... and ends up at Porte de Versailles where fbb and chum alighted at 1615. 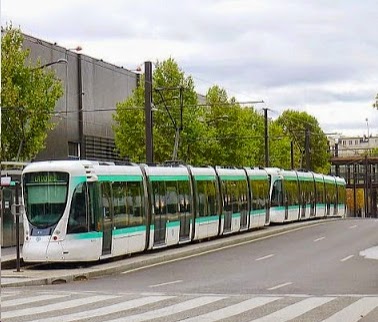 They has passed by on Tram 3a six hours earlier. 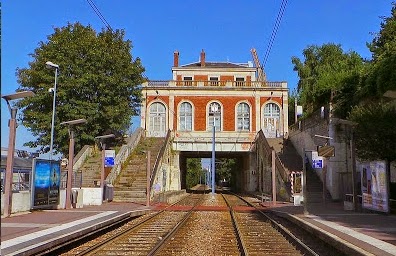 ... there is much more to this delightful tramway than can be reported in this taster blog; so, yet again, more to come later.

Conclusion: an excellent day's exploration of three very different Parisian Tramways with much more to tell us. We have a further 5 lines to consider (Tramways 4 to 8) and the regional transport authorities are planning many more.

fbb will need to return to keep track.


Next Paris RER blog : Thursday 7th May
Posted by fatbusbloke at 02:00