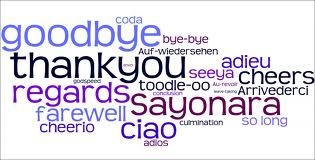 As you would expect, on-line, response to the new network, as first announced, was varied:-


SimpliCITY more like ConfusiCITY, service 1 will go to either Drumchapel, Balloch or Helensburgh service 19 will either be Easterhouse/Robroyston, Blairdardie/Summerston but the best is the 38 to Easterhouse/Chryston/Barlanark/Baillieston. The amount of cuts is ridiculious to Broomhill, Cairns, Drumgagard, Bargeddie Scheme, no doubt first will expect SPT to step in. I have followed First since they took over Strathclyde Buses/Kelvin Central Buses but i cant wait to see the back of them in the Lanarkshire area where i am, they just keep cutting services right back and fill the area with buses fit for the scrapheap.


As for all the greetin faced loonys, at least First have put it up and given people time to look at it? Majority of the changes are for the better with a better frequency on most routes. This has been in the offing for a while I'm told so they have obviously been working at it and not just mashed it together.

The scheme as announced was based on "doing a Trent" with the same number for several different destinations. But common sense prevailed and suffix letters re-appeared after the public consultation.

There has been plenty of publicity; starting with a trendy (?) on-line magazine which raves enthusiastically about absolutely everything ... 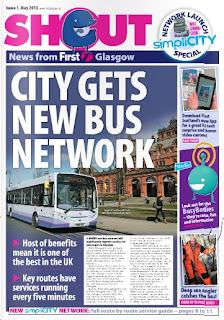 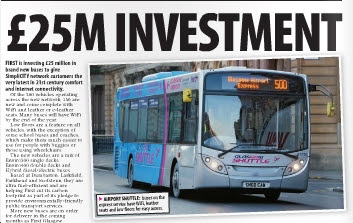 ... with WiFi, of course. Being Wifi-d will be "rolled out" over the whole fleet by the end of the year, we are told. Oh. goodie!

And the magazine has a full list of the changes. 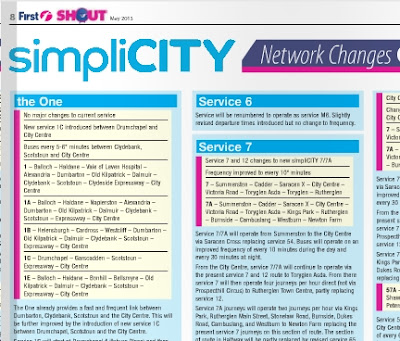 It is not clear on-line whether this "mag" is available in hard copy for those of us who like to stick to easy-to-read printed matter. Nor does the chubby one know whether timetable leaflets for individual routes are available; they should be, but you never know these days.

For the wired community (WiFi-d community) real, proper PDF timetable are available to downoad. And the are so, so much better that First's oft-befuddling standard on-line offering. We saw the new 60/60A and M60 PDF versions in yesterday's blog (read again), all neat and tidy. But, on line, standard HTML style, ... 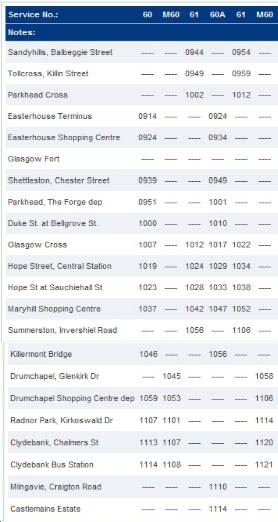 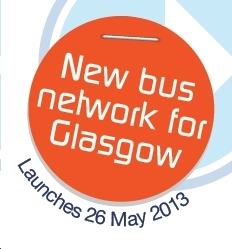 But the Simplicity guide, although lacking timetables as such, is particularly helpful. First comes a list of services pre-change ...

... and what they have changed into. Then a simple list of old service numbers and the new ... 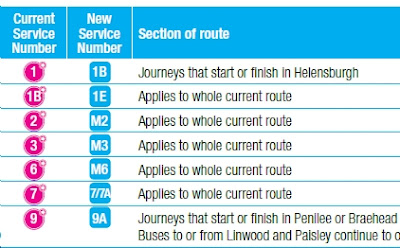 ... followed by an in-depth study route by route, again based on the "old" numbers. 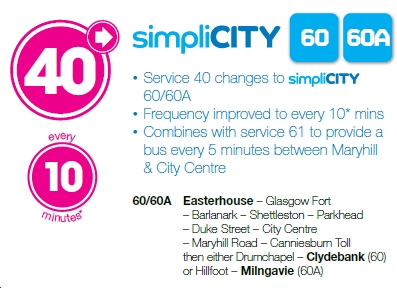 Below each "headline panel" (as above) is a full and understandable description of the change in detail. To an outsider living far from Glasgow, this makes sense.

An even greater bonus is that each PDF timetable (the good and tidy ones!) is accompanied by an excellent route map; this for the 60 and 60A along Maryhill Road. 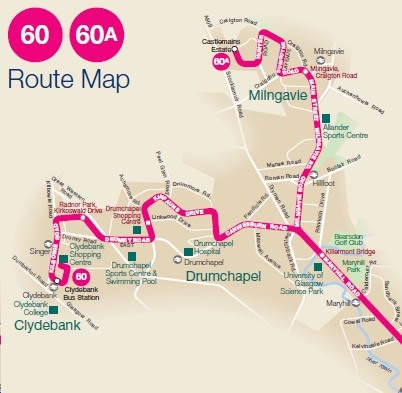 These are really, really good. And, there's more! A City Centre detailed map as well, provided for every route. 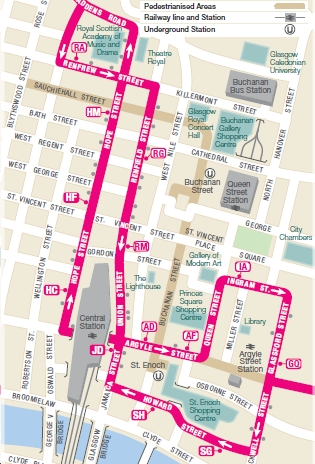 Assuming that this stuff was readily available in hard copy (a big assumption these days), then it would be hard to fault First in their desire to inform Hamish MacPublic of the new network.

Has Hamish MacPublic understood it all? Now that's a quite different question!