Worries Whilst Waiting at Watford [P.S.] 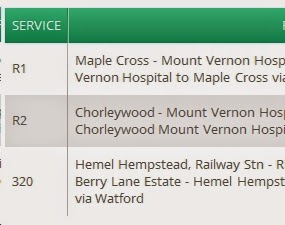 Two days ago, fbb waxed all lyrical about the on-line timetable finder provided by the Intalink partnership; aka Hertfordhsire County Council. His enquiry for a service 320 timetable was quite easy. But researching subsequent blogs revealed some problems.

So let us look more closely.

And, as you would expect, up pops a link to the service 8 timetable ... 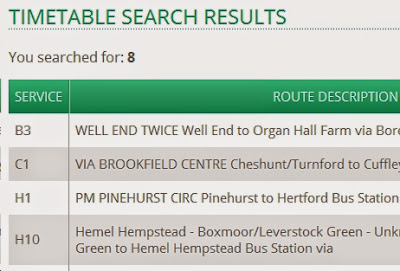 ... plus every other timetable in Hertfordshire. Please note that the B3 goes to the delightful Borehamwood "suburb" of "Well End Twice Well End" and the H1 serves "PM Pinehirst Circ".

16  NOT TESCO OUT Burns Road (Circular) to Town Centre via

... to "Not Tesco Out". In fact the list is full of unintelligible gibberish. Where this stuff comes from is unclear, but whoever put it there should be made to explain it publicly from a soap box on Watford High Street. Remember John Major? 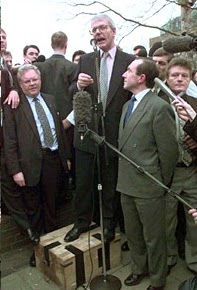 It didn't work for him either! And bear in mind that we were looking for service 8.

Of course, there is an explanation specifically for the daft search results, even if the timetable headings are intrinsically potty. The confuser is doing what is called a "text string search"; it looks for every occurrence of the input set of characters. So asking for service 53 ... 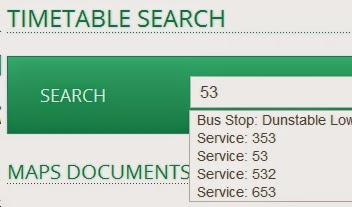 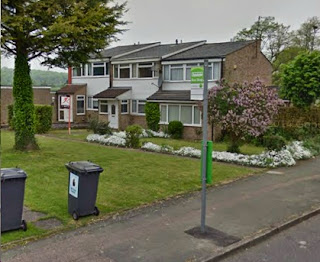 ... with 534 being the house on the left with white lamp and white on black house number. 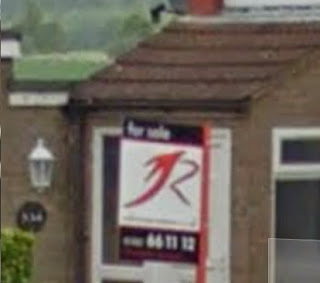 the stop is actually bang outside number 536! It is served by hourly route 34. 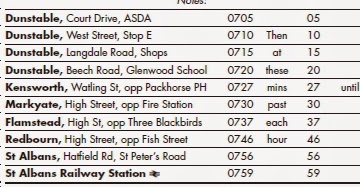 So now you know; but not much help in finding services in the Watford area.

Because of the search system, looking for buses from Watford Junction station is another mess. 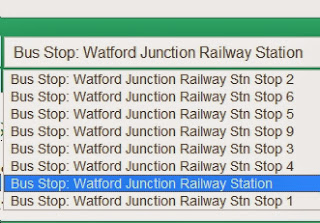 ... which we already know leaves from stand 4. 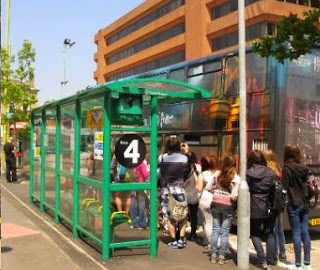 Click on the Stop 4 entry and the 311 is there as well. fbb has not done the lengthy (and tedious) research needed to check whether Intalink's on-line index is accurate and up-to-date. From evidence so far it probably isn't.

Thinking back to the wondrous three versions of the W30, try looking for buses to the business park. 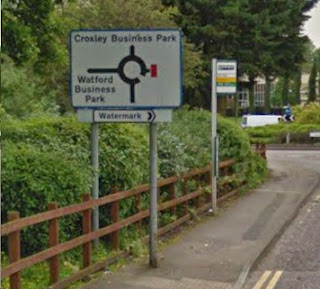 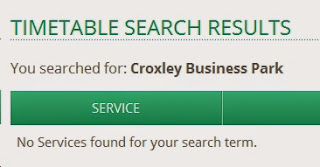 ... produces a nil response. So, once again, to find anything you have to know exactly what to look for. If you get the question wrong, you will get the wrong answer.

In conclusion, to close; and  for our general entertainment, here are a few juicy services from Hertfordshire's list.

How many times does it go the Reed and Cottered? And is it the same as ...

...which, as it's anti clock, never runs to time? And another multiple monstrosity:-

In fact the route runs from Tyttenhanger via St Albans to Sandridge with a couple of odd extensions. People would be far less confused if the basic route were indexed and the extensions shown on the PDF timetable. One can only assume that these on-line timetable headings are generated "on the fly" from some databse. If the PDF timetable is laid out in a confusing matter it will deliver a stupid heading. One day, when he feels particularly brave, fbb will unravel the mess that is routes 304 and 305.

In the meantime, your investigative blogger has to conclude that the Intalink on-line timetable search facility is not worth the good house point he awarded a couple of days ago. Searching for route 320 did not confuse the confuser as the "text string search" wouldn't find much else containing the character group 3, 2 and 0.

In fact this index and the answers it gives are bad beyond belief.

The last word goes to Ricky Gervais, courtesy of YouTube. Blog readers may substitute "they" as appropriate!
An investigation of Hertfordshire tendered service W19 is postponed.

It would appear that Western Greyhound is the company in question. No surprise there, but who might want to buy it?