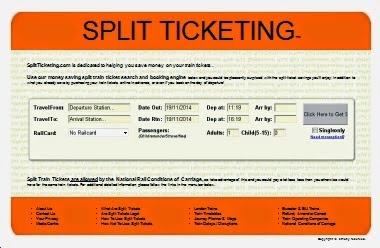 A blog comment writer suggested this site as a "better" and "more useful" way of benefiting from splitting our rail journey into separate chunks. Those considering this idea MUST be aware that it can add extra restrictions and complications to your journey and is not recommended for the inexperienced. The two sites so far tested (TicketySplit and Split Your Ticket) are simply not good enough.

A recent fbb journey was from Axminster to Reading on a Saturday. TicketySplit only does singles so offered a fare nearly twice as much as the saver return. SplitYourTicket told fbb that the journey was too short. Split Ticketing gave the fare which fbb paid which was £27.05 saver return. All fares quoted here are for travel using a senior railcard. 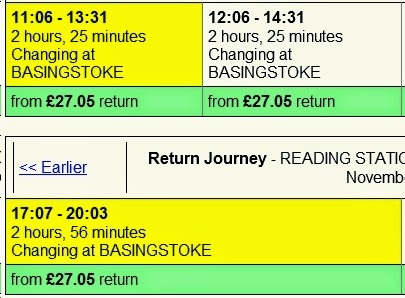 BUT when your intrepid investigator looked for an earlier train, the program gave a different answer. 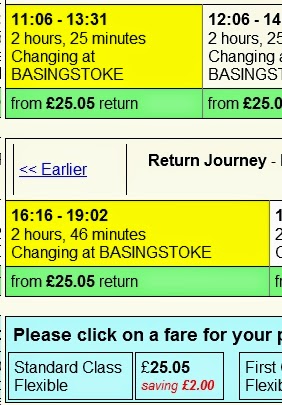 Where did the £2 saving come from. Answer; the system strung together three DAY returns. 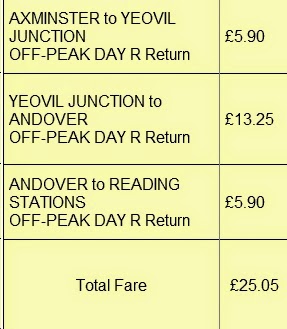 Such a ruse is perfectly OK provided that trains in both directions stop at the designated stations; which, in this case, they do. But here's the beef. Day returns are available by any train on a Saturday, so why the difference? Dunno; but it does not inspire confidence in the system.


For fbb's recent Axminster to Truro run early on a Tuesday, the system correctly offered peak travel to the point at which peak restrictions ceased and thus saved much fine gold. 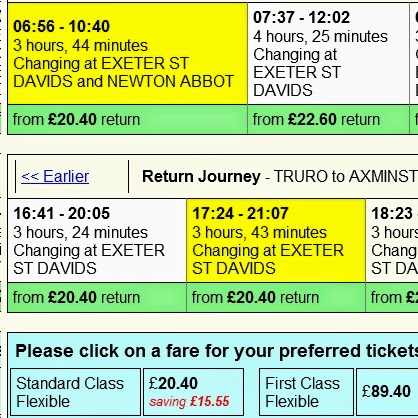 Neither of the previous two systems tried could find this.

What about Aminster to Sheffield? 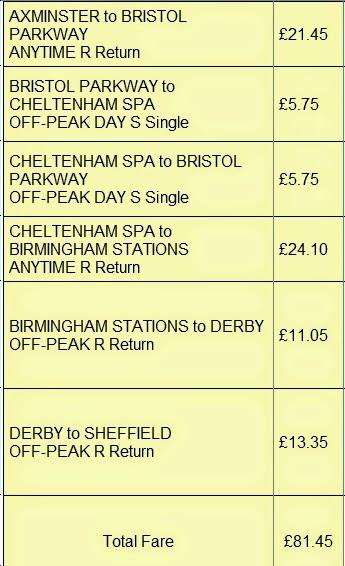 Here the offer is a string of six assorted tickets totalling £81.45. What, thought fbb. would it offer via London. Well, it didn't. To get a "via London" fare (arguably the best way to go anyway) you had to click on "advanced options". And here was a big surprise. Your were passed on to a FOURTH site ... 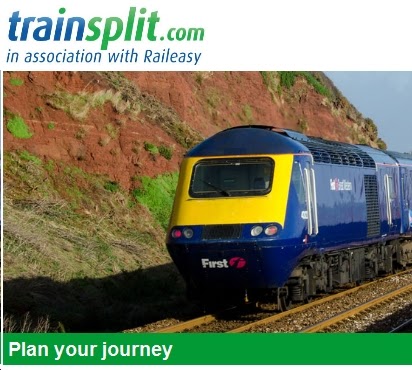 Raileasy's smart booking engine will always default to cheap rail tickets; the cheapest available at the time so you do not have to route (sic! they mean "root" : literacy is not a requirement for their web designers.) around to find a good deal! We do the hard work for when searching for cheap rail tickets. (so does every other ticket retailing site!) 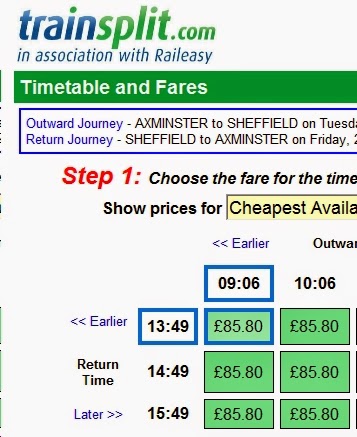 TrainSplit.com offered only the usual super saver at £85.80. The only restriction for fbb on the route via London is that you have to go early enough to avoid a peak hour super saver ban out of St Pancras (Monday to Friday).

Now the decision a user has to take is simple.

Do you want to go via Bristol, save £4.35 and have to use the same route back OR, pay the super saver rate and travel via Bristol or via London as the spirit moves? Would you be confident that your return train stopped at all the right stations? What if you made a mistake?

One final test. Axminster to London at peak times. You may remember that SplitYourTicket, although resolutely refusing any offers on MOST of fbb's enquiries did offer a stunning bargain here.

But, we may remember, these were all out-of-date fares.

Interestingly (worryingly) SplitTicketing came up with different answers. This for a return after 1600 ... 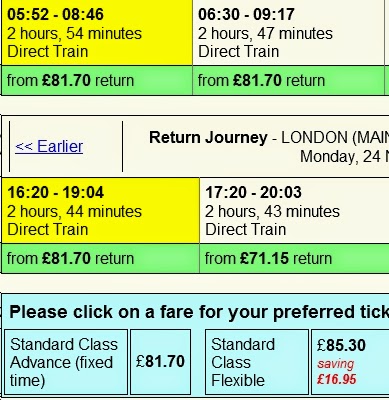 ... and this for a return one hour later and more into the peak. 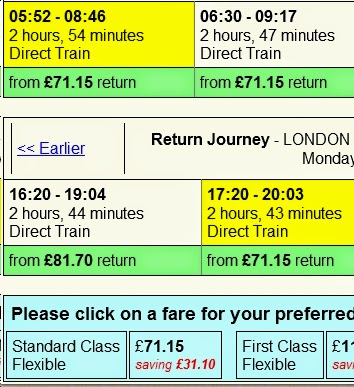 Cheaper by over £10 for "more peak" journey. Try to explain all that to a "normal" passenger!

Without going into the complex detail, it is clear (really?) that savings via split ticketing in general add restriction, tension and, dangerously, extra expense IF you make even the smallest error; or, heaven forfend, if a train misses its connection. It is very easy to be stuck with an invalid ticket. If you are prepared to take those extra risks and restrictions then, for the moment, this SplitTicketing site is better then the other two (TicketySplit and SplitYourTicket) which should be disposed of in the great electronic waste bucket in the sky.

What is really crazy is that TicketySplit is being promoted by MoneySavingExpert.com when it rarely saves you money,

Maybe it is best to take heed of this heading on the SplitTicketing site.

Anyway, fbb's brain is now hurting badly, so a strong coffee is needed before proceeding with the rest of his day.

Just a snippet of nostalgia. A teenage fbb used to travel regularly by bus from Northampton to Little Billing turn. Fare tables were never published by United Counties, but fbb got hold of one from an employee. He discovered that he could save tuppence (less than 1p) by rebooking at Weston Favell The Trumpet (just below "Hospl" on the map.

So one day he tried it. Suffice it to say that the conductor's reaction was vehement with antagonistic and aggressive asperity. fbb never tried again. He was too frit! With today's coarse and steeply "tapered" fare scales, it is unlikely that Bustticketsplit would ever deliver a bonus.

Unless anyone out there knows any better?

Next rail blog : Sunday 23rd November
Posted by fatbusbloke at 02:00